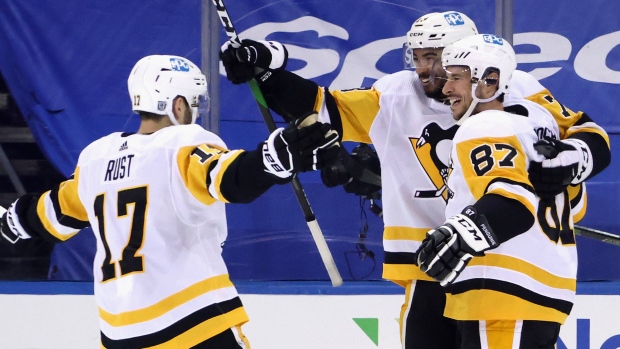 NEW YORK — Sidney Crosby scored at 2:27 of overtime and the Pittsburgh Penguins beat the New York Rangers 5-4 on Saturday night to stop a two-game skid.

Jason Zucker, Brandon Tanev, Kasperi Kapanen and Jake Guentzel also had goals for Pittsburgh, which was coming off consecutive losses in Boston — the first one in overtime. Casey DeSmith made 30 saves.

Guentzel tied it 4-all midway through the third period, and Pierre-Olivier Joseph had two assists as the Penguins (5-3-1) improved to 3-0 against the Rangers this season.

“I think it builds character for the group,” Crosby said after Pittsburgh won its third game when trailing after two periods. ”If you continue to put yourself in that situation, that’s not necessarily the formula to have success. ... We've got to find a way to get leads, hold them and build momentum from them.”

Brendan Lemieux, Kevin Rooney, Chris Kreider and Artemi Panarin scored for New York (2-4-2), which lost for the fifth time in six games — all of them decided by one goal. Alexandar Georgiev made 33 saves in his fourth start this season.

The Penguins pinned a tired Rangers trio in its own zone for a majority of the extra session and Crosby took advantage. Pittsburgh’s captain fired a shot from the high slot through Georgiev's legs for his 18th career OT winner.

Guentzel evened a back-and-forth game when the 26-year-old winger put home a rebound after Crosby won a faceoff cleanly in the offensive zone.

The Rangers took their first lead at 16:01 of the second on the power play. Panarin got his fourth goal of the season with a one-timer from the slot. Pavel Buchnevich and Tony DeAngelo assisted on the play.

Rooney sparked a three-goal second for New York with a short-handed tally. Rookie defenceman K’Andre Miller and Rooney executed a give-and-go to perfection on a two-on-none rush. Rooney has 11 career goals, seven while killing a penalty.

Evgeni Malkin helped Pittsburgh regain a one-goal advantage after he intercepted a puck in the defensive zone and sprung Kapanen for a breakaway at 9:42 of the middle frame.

“I’m getting a bigger role here, getting more responsibility in the offensive zone,” Kapanen said after playing last season with Toronto. “That’s something I feel like every player kind of enjoys. So far I have played well in it and my linemates have been helping me out a lot. It’s a big two points for us.”

Just 43 seconds after Pittsburgh took a 3-2 lead, Kreider buried a rebound to help New York overcome a one-goal deficit for the third time. Miller and fellow defenceman Jacob Trouba assisted on the equalizer.

Zucker opened the scoring at 7:39 of the first period. Joseph found Zucker darting toward the back post after receiving a cross-ice feed from Kapanen.

“They beat us to every loose puck, they won every battle, we kept shooting ourselves in the foot,” Rangers coach David Quinn said. “They were smarter and looked like a little hungrier team than we were in the third period."

Lemieux scored his first of the season to tie it at 1. Phillip Di Giuseppe tossed a puck toward the net and a hard-charging Lemieux guided the rebound past DeSmith.

Tanev gave Pittsburgh a 2-1 lead in the final minute of the first when he redirected Joseph’s shot past Georgiev.

The Rangers began a stretch of eight straight games in the New York Metropolitan Area — seven at Madison Square Garden and next Saturday at New Jersey.

The average age of a player on the Rangers’ active roster this season is 25.6 years old, the youngest in the NHL.