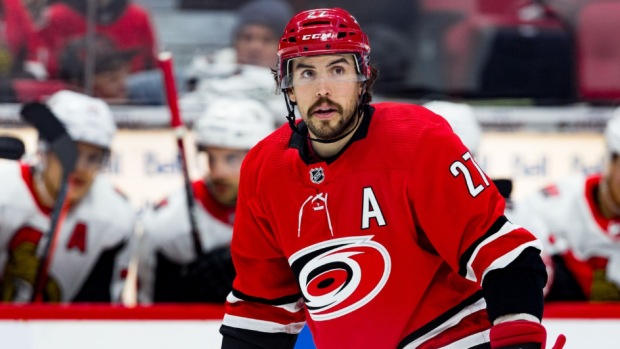 The Carolina Hurricanes have traded Justin Faulk and a 2020 fifth-round pick to the St. Louis Blues for defenceman Joel Edmundson, prospect Dominik Bokk and a seventh-round pick in the 2021 NHL Draft.

As part of the deal, the Blues signed Faulk to a seven-year, $45.5 million contract extension, carrying an average annual value of $6.5 million. Faulk, who carries a $4.83 million cap hit for this season, is now signed through the 2026-27 season, four more years than any other player on the Blues roster. TSN Hockey Insider Pierre LeBrun reports the deal is front-loaded, with Faulk earning $9 million in each of the first two seasons.

"We are excited to add Justin to our core group for the next eight years," Blues general manager Doug Armstrong said. "He's a top-four defenceman who averages over 23 minutes a game and we are confident he will be a strong addition to our club."

The deal comes just hours after Hurricanes head coach Rod Brind’Amour said he was told to hold Faulk off the ice for the team's scrimmage on Tuesday.

Faulk scored 11 goals and posted 35 points in 82 games last season. He added one goal and eight points in 15 playoff games with the Hurricanes.

The 27-year-old was rumoured to be involved in a potential trade to the Anaheim Ducks earlier this month, but the deal reportedly fell apart when he couldn't come to an agreement on a contract extension with Anaheim.

"Still got to show up, right? Still a part of this team," Faulk said when training camp opened on Sept. 13. "I mean it happens. I'm not the first person in the league to ever see their name thrown out there or have something maybe going on. I'm still here and ready to work and show up and try and do my thing."

LeBrun notes the Blues were on Faulk's approved trade list, but St. Louis required the two sides to reach an extension before executing the deal with the Hurricanes.

Faulk wasn’t required to waive his modified NTC, the Blues were already part of his YES list. But the contract extension was a requirement from the Blues’ perspective or else there’s no trade.

A second-round draft pick of the Hurricanes in 2010, Faulk has appeared in 559 games with the team since debuting during the 2011-12 season. He has 85 goals and 258 points over the course of his career and has reached the 15-goal mark three times.

Edmundson, 26, appeared in 64 games with the Blues last season, posting two goals and 11 points. He added one goal and seven points in 22 games as the Blues won the Stanley Cup last spring.

Edmundson carries a $3.1 million cap hit for this season and is scheduled to become an unrestricted free agent in July.

Bokk, 19, was selected 25th overall by the Blues in the 2018 NHL Draft. He had eight goals and 23 points with Vaxjo of the Swedish Hockey League last year and is without a point in in four games with Rogle BK Angelholm this season.