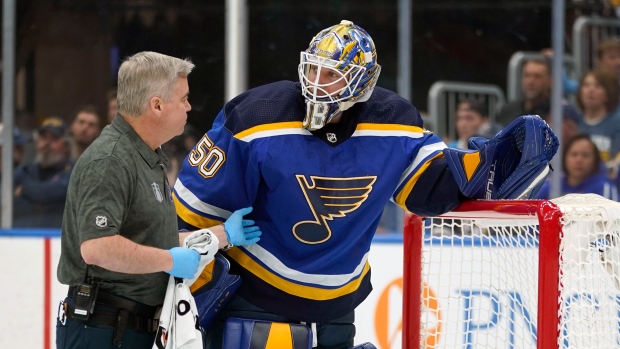 The St. Louis Blues confirmed Sunday that goaltender Jordan Binnington will miss the remainder of the Blues' second-round series against the Colorado Avalanche due to a lower-body injury.

“I just see a loose puck, really,” Kadri said. “I was just kind of sitting behind him and just tried to poke it with my stick. I think their defenceman kind of collided with me and pushed me into him. Had that not been the case, I don't think I would have hit him at all.”

“Look at Kadri's reputation,” Berube said. “That's all I've got to say.”

Kadri has been suspended in the playoffs three times in his career.

After the game, Kadri accused Binnington of throwing a water bottle at him during a postgame interview.

"It's always tough. Binner is a heart and soul (player), playing unbelievable," Blues captain Ryan O'Reilly said of the play. "It took the momentum away... Things like that happen, we're a good team and we could have done a better job of getting momentum back."

Through six playoff appearances this season, Binnington is 4-1 with a 1.72 goals-against average and a .949 save-percentage.