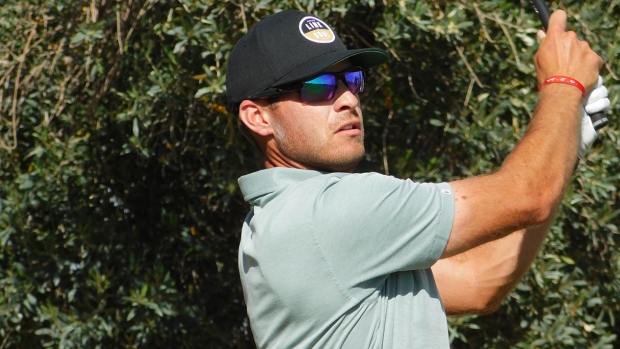 LITCHFIELD PARK, Arizona—At the Mackenzie Tour – PGA TOUR Canada Qualifying Tournament Thursday, Dylan Healey would have had the round of the day if it weren’t for a player from Blue Earth, Minnesota. Jon Trasamar, a former University of Minnesota golfer, made six birdies on the front nine for a 6-under 30 and added four more on the back to shoot his low-round-of-the-tournament 62. Healey, a former University of Arizona golfer, came in with a bogey-free, 9-under 63 and those two are deadlocked at the top of the leaderboard at 13-under. Trailing by a shot is 36-hole leader Tee-K Kelly, who fashioned a 2-under 70 at The Wigwam’s Gold Course, while amateur Clay Feagler, with a 64, moved into fourth place, three strokes behind the leaders.

“It was obviously a great day. The greens were a little softer today. You could tell they put a little water on them last night,” observed Trasamar, a mini tour player since college, with four Mackenzie Tour starts on his resume. “There was a chance you could be at least a little more aggressive with your fly-in numbers and get [the shots] a little closer to the hole. [The greens] were so firm before that you had to be so careful where you landed it.”

Healey, a PGA TOUR Series-China veteran, who also has two starts on PGA TOUR Latinoamérica, said today was a little easier than the second round, his score proving his point. “I felt like today was a little more gettable,” he explained, comparing the Gold Course’s greens to a mini tour event he played here last week. “The greens got a little slicker, and I felt like they were slow last week and the beginning of this week. They got to a really nice speed today.

“I made a couple (putts) early. I told myself I hadn’t got off to a good start,” he continued, alluding to his 69-71 first two days, “and today I finally did. I had a good day.”

Like Healey, Trasamar was bogey-free, with six birdies in his opening seven holes, only a par—surprisingly—at the par-5 fourth ending his streak. He added birdies on Nos. 10, 11, 14 and 17 on the hottest day of the week as temperatures climbed to 95. He also birdied the Gold Course’s first two holes and turned in 31 after adding birdies at Nos. 6, 7 and 9.

Perhaps Healey’s hole of the day, though, was a par at the par-5 14th after he had made three consecutive birdies, starting at No. 11. Healey hit his second shot into a bunker 40 yards short of the green. “I hacked it out and two putted from about 50 feet,” he said, noting that he left his birdie putt short and had to make a challenging 10 footer just to save par. “That was an awesome momentum-saver,” he added.

Kelly had a steady round after a par-bogey start following birdies on those two holes in each of his first two rounds. With birdies at the fourth and fifth holes, he was able to make the turn at 1-under and then played the back also at 1-under. “I got off to a little shaky start,” he said. “I corrected the ship a little and played a really solid round of golf for how I struck it today. I’m happy with 2-under.”

Kelly will join Trasamar and Healey in the final grouping of the day, the trio teeing off at 12:30 p.m. PDT