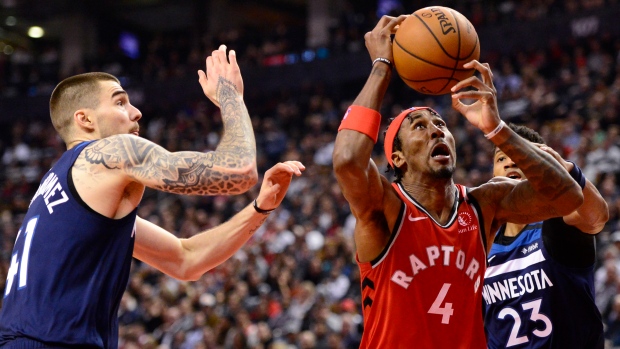 TORONTO – Word began to spread in the Raptors’ locker room about two and a half hours before game time.

Serge Ibaka, Toronto’s fill-in starter, was under the weather and wasn’t going to play on Monday. He probably could have gutted it out, or at least would’ve given it a shot if this were a playoff game. Of course, it was not. It was a Monday in early February, just a few days before the all-star break, against a bad Minnesota team.

The obvious call was to play it safe but it meant that, once again, Nick Nurse and his club – or what was left of it – would have to get creative. Fortunately, they’re used to it by now.

“It was like 5 o’clock, a little bit before the jump ball and [some of my teammates] were like, ‘Hey, Serge is sick,’ ” said Rondae Hollis-Jefferson. “I heard it from a player. I didn’t even know if it was true. And then we went upstairs [to the team’s old practice gym on the third level of Scotiabank Arena for the pre-game walkthrough]. It was like 5:30 and [the coaches] were like, ‘Rondae, you’re [starting]’. I was like, ‘OK, let’s do this.’ ”

Hollis-Jefferson was one of four Toronto players to record at least 20 points, scoring 21 in a spot start, as the Raptors pulled out a 137-126 win over the Timberwolves, extending their franchise-record winning streak to 15 games. It was the latest chapter in a remarkable run that has highlighted their unexpectedly impressive season, while battling adversity.

Having to adjust and improvise on the fly is nothing new for a Toronto team that has been one of the most banged up in the NBA this year. They’ve had to manage injuries to almost every single rotation player, often multiple at a time. Still, this seemed like a unique challenge.

Marc Gasol, the team’s starting centre, would be missing his seventh straight game with a hamstring ailment that also cost him 12 contests earlier in the year. Now, his very capable replacement was out as well.

The Wolves came in with a record of 16-35 and had recently overhauled half their roster at the trade deadline, but they would feature talented seven-footer Karl-Anthony Towns – a big and physical all-star calibre centre. The Raptors wouldn’t have a healthy five-man to match his size and strength.

Instead they went with Hollis-Jefferson – a versatile forward generously listed at 6-foot-6, though he joked he’s closer to 6-foot-4 without shoes on. Nurse considered going even smaller in the starting lineup and shifting OG Anunoby to power forward and Pascal Siakam to centre. However, he trusted that Hollis-Jefferson was both physically and mentally strong enough to hold his own in the matchup, and his effort might help make up for the size disparity.

Toronto’s lack of size was apparent early on. The Raptors were red-hot offensively, shooting 64 per cent through 24 minutes, but without a big and intimidating presence in the paint, they were bleeding points around the rim.

However, as they’ve done for most of the campaign, they found a way to get it done. Anunoby scored a career-high 25 points and grabbed 12 boards, which matched a personal-best. Siakam turned in his best two-way performance since coming back from a groin injury last month, scoring 34 points and hitting six three-pointers. Kyle Lowry was typically excellent, recording 27 points, seven rebounds and 11 assists.

As they started to pull away in the third quarter, and then again when they put the game away in the fourth, they were playing bigger than their size. They out-rebounded Minnesota, 41-38, on the night.

Despite giving up more than half a foot and over 30 pounds in the matchup, Hollis-Jefferson did an admirable job as the primary defender on Towns. He had some assistance from his teammates – particularly Siakam, whose help defence was great in the second half – but Nurse credited the 25-year-old forward with getting underneath Towns, pushing him out of the paint and fighting him on the catch.

Towns scored 23 points in 36 minutes but shot just 5-for-13. Most of his damage came at the free throw line.

“It’s definitely different,” Hollis-Jefferson said. “The battle, the battle in itself, holding your own ground. It’s definitely about being mentally tough, having that resiliency. Coming where I come from, I was born with it. I inherited it. For those that don’t know, I’m from Chester, PA, thank you. I love a challenge at the end of the day.”

It’s not like Nurse had many other options. Chris Boucher has the length to contend Towns’ shot out on the perimeter, but doesn’t possess the upper-body strength to battle with him in the post. Even Dewan Hernandez, Toronto’s rookie big man who’s only appeared in four games this season, remains out with a badly sprained ankle.

In the end, Hollis-Jefferson got the job done and several of his teammates stepped up to fill the void around him, with Gasol, Ibaka and Norman Powell out of the lineup. That’s been the underlying theme of the winning streak, which is now tied for the 11th-longest in the NBA over the last decade.

They’ve had to win in different ways and with different guys contributing. On some nights they’ve had to overcome injuries, on others they’ve had to come back from big deficits. They’ve given up big leads but have found a way to pull out games that seemed lost.

One way or another, they’re confident that whatever happens they’ll be able to figure it out.

“It’s never been perfect,” Siakam said. “We’ve barely had our team and we’ve always had to adjust and figure it out. And I’m sure guys know now that you have to be ready every day. You never know what’s going to happen. Today you might be sitting on the bench and the next day you’re starting. That’s just got to be the mentality and I think everyone knows that.”

“I think these guys have proven enough that they can win,” said Nurse. “We’ve had a lot of injuries this year, but they just keep stepping up and playing and we’ve just gotten used to it. You at least have to go out and give a great effort, give yourself a chance to win, and don’t let [the other team] play harder than you. If you think you’re under-talented or undersized or whatever, then you’ve got to take your energy and toughness up a notch and think we’ve done that most nights.”​