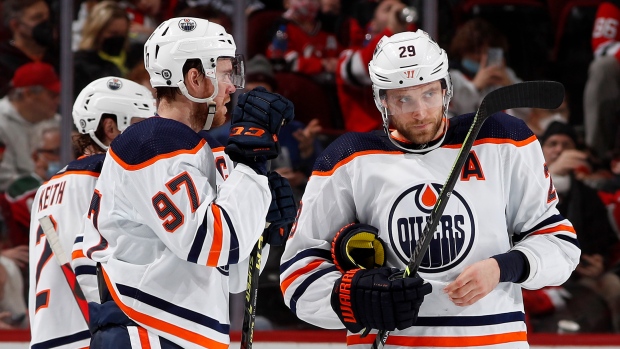 Connor McDavid had just witnessed his Oilers surrender five goals in the third period against the NHL's 30th-ranked team.

Edmonton's superstar captain also seemed at a loss for words in the wake of another crushing defeat.

"I'm not sure what to tell you," McDavid told reporters after dropping a 6-4 decision to the Ottawa Senators on Saturday. "Work ourselves to a 3-1 lead and give it away."

Subsequently asked if it represented one of his most frustrating regular-season losses since joining the Oilers as the No. 1 pick at the 2015 draft, the game's best player didn't skip a beat: "It's definitely up there."

The loss to Ottawa represented the latest setback for a team that expected so much more of itself this season.

Early on, however, the Oilers delivered. While there were some troubling signs, they jumped out to a 16-5-0 start to sit alone atop the Western Conference on Dec. 1.

But Edmonton has gone just 2-10-2 since — victories Dec. 16 and 18 are bookended by a pair of six-game losing streaks — and continues searching for answers.

It started anew with a hard practice Monday that included battle drills led by McDavid and top-pair defenceman Darnell Nurse.

"Those are your big dogs," Edmonton blue-liner Tyson Barrie said. "That sets the tone.

"If Connor McDavid and Darnell Nurse are battling and playing against each other hard, there's zero excuse for anybody to take any sort of break."

The players are mostly saying the right things — Oilers winger Brendan Perlini had a particularly upbeat recent media availability — but it's clear nerves are frayed in the Alberta capital.

Edmonton centre Leon Draisaitl, who's one point ahead of McDavid for second in the league scoring race, had a testy exchange with an Edmonton reporter Tuesday.

"We have to get better at everything," the German said when asked if there was one specific area the team needs to improve.

"No ... you can do that," Draisaitl replied. "You know everything."

"Why are you so pissy, Leon?" the veteran media member retorted before the back-and-forth continued another 20 seconds.

One facet where Edmonton could do much better is how it starts games.

The Oilers have allowed the first goal an NHL-high 25 times in 35 outings, consistently feeling their way into the action rather than grabbing hold of proceedings.

"That's been a theme, but the desperation's key," Barrie said 24 hours before Draisaitl's uncomfortable media exchange. "We're in a good position going into the third period (against Ottawa) and we don't get it done.

Oilers general manager Ken Holland has never fired a coach mid-season during his Hall of Fame career, but the temperature and pressure to do something to shake things up continues to mount in lockstep with every loss.

The problems, however, run much deeper with a defence corps that still isn't good enough and a forward group that continues to rely far too much on McDavid and Draisaitl for offence.

The Oilers, however, insist the answers reside in their locker room.

Next up for the Oilers? Just a Thursday visit from the Florida Panthers, who sit second in the overall standings, before hosting the Calgary Flames on Saturday.

Despite their warts early in the season, the Oilers always seemed to have a response following a loss.

That feels a lot longer than a few months ago for a team that has just two victories in seven weeks to sit seventh in the Pacific Division — albeit with games in hand on most rivals because of COVID-19 postponements.

"It's funny ... even games you feel like you're playing well in, you don't get results," Barrie said. "Then everything starts to tighten up, guys lose their confidence.

If they don't, change — in some form — could be coming.

FANS NORTH OF THE BORDER

Ottawa hosted the Buffalo Sabres in an empty Canadian Tire Centre on Tuesday due to continued provincial restrictions in response to the fast-spreading Omicron variant.

The Oilers, Flames and Vancouver Canucks are currently permitted 50 per cent capacity, while the Senators, Toronto Maple Leafs, Winnipeg Jets and Montreal Canadiens are barred from welcoming spectators. There are no such restrictions in the United States.

Dozens of games have been postponed across the league due to outbreaks this season, but cuts to crowd sizes in Canada have also pushed dates back as teams look to maximize cash flow following crushing pandemic losses.

NHL deputy commissioner Bill Daly wouldn't rule out more games north of the border being moved for attendance reasons, but said further delays are "likely contingent on other schedule-related conditions around the league."

"Assuming we may be past our most disruptive scheduling period, I would think that Canadian-based games are less likely to be rescheduled going forward," Daly wrote in an email to The Canadian Press.

The Canadiens and Arizona Coyotes squared off in a battle of bottom-feeders earlier this week.

And if Shane Wright tuned in, the centre with the Ontario Hockey League's Kingston Frontenacs and top-rated North American skater ahead of the 2022 NHL draft would have seen the 32nd-ranked Canadiens drop a 5-2 decision against the 31st-ranked Coyotes.

Wright, 18, could very well wind up on the shores of the St. Lawrence River or the searing Arizona desert when the draft is held in July at Montreal's Bell Centre.

The Canadiens, who made last season's Stanley Cup final, have won just eight of 38 games this season.

Much of southern Ontario woke up Monday to a blanket of snow as part of a crippling winter storm of rare proportions.

The Leafs found themselves in that boat — and needed some creativity to register perfect practice attendance.

"It took over an hour to plow the driveway," said captain John Tavares. "Lucky enough, I've got a truck.

"Not your typical morning."

Toronto defenceman T.J. Brodie required a lift to make it on time, while forward Alexander Kerfoot was late thanks to a weather system that dumped as much as 50 centimetres of snow in some parts of the province.

"Bit of an adventure," Kerfoot said with a grin. "I've got a little car that doesn't handle the snow too well ... trying to make it out didn't go too well.