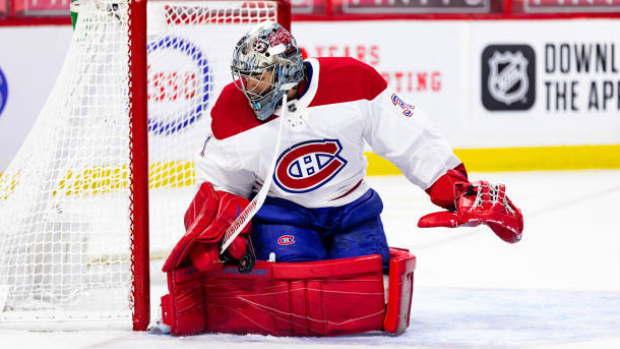 Montreal Canadiens goaltender Carey Price allowed five goals on 29 shots in Thursday's 6-3 loss to the Winnipeg Jets, dropping his record on the season to 5-4-3.

Price, who has posted a save percentage above .900 just once in his past six starts, said his struggles may be mental after posting .936 save percentage during the Return to Play last summer.

"Maybe I'm overthinking things," Price said. "That's all I've got for you,"

#Habs Price on his difference in performance between the bubble last summer and now: "Maybe I'm overthinking things."

Price has a .888 save percentage on the season with a 3.13 goals-against average - the worst marks of any season in his 14-year career.

Thursday's loss was Dominique Ducharme's first behind the bench after taking over from Claude Julien on Wednesday and Price said he was hoping to see the new head coach open with a victory.

"Obviously disappointing," Price said. "Dom's gonna' be great for us. We just gotta' be better."

Ducharme said after Thursday's loss he will evaluate Price, the NHL's highest-paid goaltender, the same way he does all players on the team.

"Like the team. That's it, he's part of the team. I think for me it was the same thing," Ducharme said.

"We're going to look at every possibility. We want our guys to be playing our best, and find solutions for every one of them, from the forwards to the Ds to the goalies. So, we'll find a solution. Carey's a competitor, I'm not worried."

Ducharme has not yet named his starter for Saturday's rematch against the Jets.