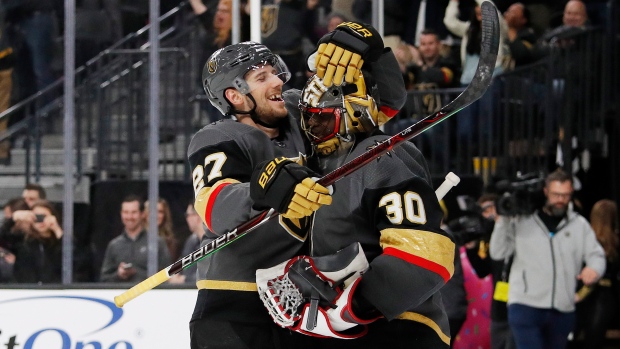 No, the Vegas Golden Knights won't have a goaltending controversy on their hands when Marc-Andre Fleury returns from a lower-body injury. But Malcolm Subban is certainly making the case he's more than capable of starting against any team, and in any arena.

"It's been definitely fun, obviously," said Subban, whose shutout came in his 35th career start. "They're a great team, so just came in here trying to get the win. The boys played a great game in front of me. ... Obviously, they got a few chances, they're a good team, couple on the power play, but other than that, not too much. Definitely a great all-around win for sure."

Subban, who won at San Jose on Monday, is nearly unbeatable at T-Mobile Arena with a 13-1-0 record in two seasons.

"We like to defend our home and defend the fortress, as we say," Subban said. "The boys always play great here. The fans give us so much momentum here. Can't thank them enough. They've been the best fans since the first exhibition game last year."

Tomas Nosek also scored for Vegas, which is 10-1 since losing to Winnipeg 6-3 in its final game before acquiring Mark Stone at the trade deadline.

"There's a lot of positivity right now," said Smith, who has at least one point in 15 of his last 19 games, having scored eight goals and dishing out 15 assists. "Obviously the goal is to be peaking when playoffs come around. We're definitely turning it in the right direction right now. The main goal for us is to keep our foot on the gas and make sure we're trying to get better every day."

It marked the first time in franchise history the Golden Knights scored five or more goals in three straight games. During their 11-game run, they've outscored opponents 47-22, and are 5-1 against teams currently in Western Conference playoff position.

"I thought we played a complete game tonight, it was excellent," Vegas coach Gerard Gallant said. "I like the way our team's played the last 10, 11 games. We continue to keep it going. We play a simple game. ... We're a better hockey team now, but I knew we had a good hockey team. We got a lot of confidence last year, we feel good about our team. We had some ups and downs like most teams go through the season - except for Tampa Bay, so far. I like our team and I've always liked our team."

Winnipeg, meanwhile, dropped to 5-3-0 in the second game of back-to-backs this season after defeating the Anaheim Ducks 3-0 on Wednesday. The Jets missed a chance to clinch a playoff berth while having their four-game win streak snapped.

Laurent Brossoit started in net for the Jets, but was pulled after allowing three goals. Connor Hellebuyck, who entered with 14 minutes left in the second period, allowed two goals and made 18 saves.

Vegas, which has the seventh-best penalty kill, stopped Winnipeg twice on the power play. The Jets, who had scored a power-play goal in five consecutive games, came into the game with the league's fourth-best unit.

"We had a tough night, got ourselves in a hole early," said Winnipeg coach Paul Maurice, who remains one win shy of passing Dick Irvin (692) for the seventh-most wins in NHL history. "I think if we'd been able to score at the 2-0 mark, on the power play, might have been able to capture some energy, but we weren't able to do that. And then it was over pretty quick by the end of the second."

After Karlsson and Smith gave the Golden Knights a 2-0 lead after one period, Nosek picked up his eighth goal of the season when he broke free alone for a short-handed snipe that chased Brossoit in favour of Hellebuyck.

Smith scored his second of the game and 17th of the season when he took a pass from Karlsson and lasered a wrist shot past Hellebuyck to make it 4-0. And just 24 seconds later, it was Karlsson with a solid move to the slot, between Winnipeg's Joe Morrow and Patrik Laine, and beat Hellebuyck far side to extend Vegas' lead to 5-0.

NOTES: Vegas D Jon Merrill played in his 300th career game. ... Smith is one game shy of playing in his 500th. ... Jets D Jacob Trouba played in his 400th career game. ... Vegas LW Max Pacioretty left in the first period after what appeared to be a collision of knees with Trouba, and never returned. ... With his assist on Smith's second goal, Marchessault moved within one point of 200 in his career. ... Vegas has recorded 93 combined regular-season wins, the most by a franchise through its first two NHL seasons, 28 more than the next-closest club.