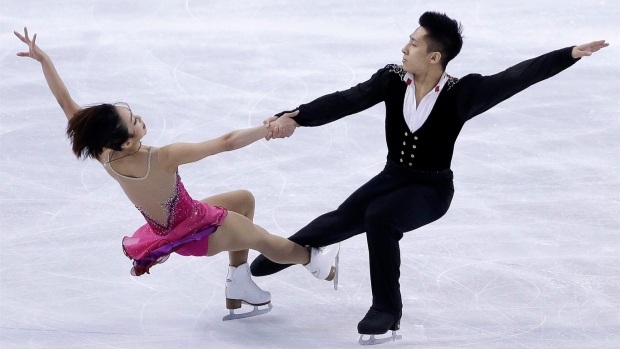 TURIN, Italy — Nathan Chen is on course for a third straight title at the figure skating Grand Prix Finals, thanks to a costly mistake by his main rival Yuzuru Hanyu.

The U.S. skater scored a personal-best 110.38 points in Thursday's short program with a quadruple lutz, triple axel and a quad toeloop-triple toeloop combination.

Skating last, Hanyu started well with a clean quad salchow and triple axel, but landed heavily on a quad toeloop on his third and final jumping pass. That meant he failed to record a combination in the program, dropping valuable points.

Kevin Aymoz placed third for France on a personal-best 96.71 despite a difficult start when the wrong music was played. Aymoz was left waiting in the centre of the ice while the correct track was found, but that didn't faze him as he jumped a clean quad lutz, triple lutz-triple toeloop combination and triple axel.

In Saturday's free skate, Aymoz can become the first French man to win a medal at the Grand Prix Finals since Brian Joubert 13 years ago.

Earlier, world champions Sui Wenjing and Han Cong took the lead in the pairs competition, scoring 77.50 despite an error on their throw triple flip when Sui put her hand down on the landing.

They're seeking to end China's 10-year wait for a pairs gold at the finals after Chinese pairs won silver in each of the past three seasons.

Sui and Han are being chased by three Russian pairs, with Alexandra Boikova and Dmitry Kozlovsky in second on 76.65. Third are Daria Pavliuchenko and Denis Khodykin, with Anastasia Mishina and Alexander Galliamov fourth.

It was a disappointing showing for Kirsten Moore-Towers of St. Catharines, Ont., and Michael Marinaro of Sarnia, Ont., who placed sixth and last after Moore-Towers fell on the landing of a throw triple loop and Marinaro stepped out of a triple toeloop.

"Just some weird stuff tonight," said Moore-Towers, in her first Grand Prix Final with Marinaro. "We can’t really explain it or understand it ourselves. We just hope to move on and start fresh in the free skate."

The pairs free skate is Friday.