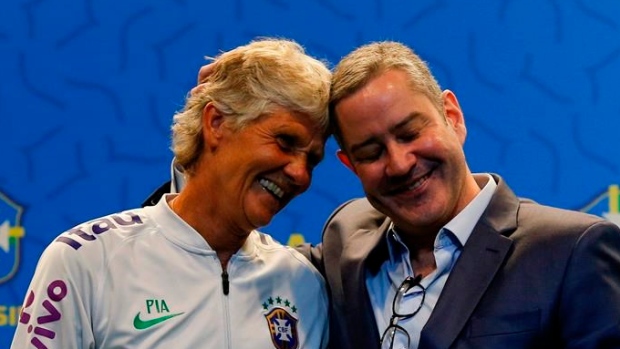 SAO PAULO — Pia Sundhage of Sweden took over as the coach of Brazil's women's national team with a promise of change, but not a total overhaul.

Sundhage said she signed a two-year deal with a possible extension for the 2023 Women's World Cup.

"Brazil needs to change, but it doesn't have to be too radical because we could lose our self-confidence," Sundhage said. "Brazil played well in the World Cup, but it can't be a small change. There needs to be a change that makes the difference."

Brazil was eliminated from the Women's World Cup by host France in the Round of 16. The 2-1 defeat in extra time disappointed fans even though Brazil was predicted to fare worse before the tournament began.

Sundhage won Olympic gold medals as coach of the United States in 2008 and 2012 and silver with Sweden in 2016.

She is the first foreigner to coach Brazil's team. Her first major challenge will be at next year's Tokyo Olympics.

"We are bringing the best coach to the best soccer of the world," Caboclo said. "Pia needs no introduction. She simply took part of the latest three Olympic Games finals. Pia brings technical quality to the players we have."

Asked about changes she plans to implement, Sundhage said Brazil needs "an American mentality" and "Swedish organization" to win more.

"If I manage to bring the best of the United States and the best of Sweden, we will have an interesting journey," she said.

One of the first players to greet the new coach was superstar striker Marta, speaking Swedish in a video.

Sundhage said she wants to be respectful with the 33-year-old six-time FIFA player of the year.

"I don't know what her position on the pitch will be. I need to earn her respect. I spoke to her, she is driven to do something positive," Sundhage said. "At the end of the day it is the team that wins, and Marta knows it."

Sundhage replaces Oswaldo Alvarez, who was fired this month after almost two years in charge. She said she will keep some of Alvarez's assistants.