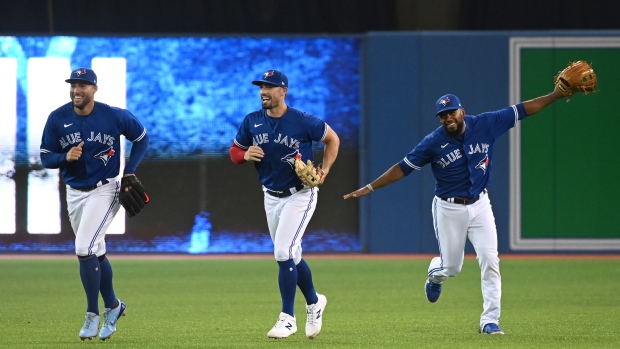 The Blue Jays have won seven of their past eight games and are thriving post-trade deadline, despite their new acquisitions providing mixed results.

Starting pitcher Jose Berrios was dynamic in his first start, delivering six shutout innings against the Royals. Closer Brad Hand has allowed two earned runs in his first two innings out of the bullpen. Setup man Joakim Soria landed on the injured list after throwing one scoreless inning. Immediate results are ideal, but it is not uncommon for new players to take some time settling into their new environment.

Catching the Tampa Bay Rays, who are atop the division, while also leapfrogging the Red Sox and Yankees seems unlikely. The American League wild-card race seems like a more reasonable pursuit. The Jays (57-49) competition in that race are the Boston Red Sox, currently the first wild-card team; the Oakland A’s, the second wild-card team; the New York Yankees and the Seattle Mariners. The Yankees are currently 1.5 games behind the A’s, the Jays 2.5 games back, and the Mariners trail the Athletics by 3.5 games.

I won’t be surprised if the slumping Red Sox (64-46) continue to slide. They only added a couple of relievers to their pitching staff at the deadline. They are pinning all their hopes on ace Chris Sale’s return from Tommy John surgery, which is a dicey proposition. Even if he is good upon his return, it won’t solve the inconsistency of their starting pitching.

The Sox also traded for left-handed slugger Kyle Schwarber from the Nationals, who has an injured hamstring and is unable to perform. Once he is healthy, his role is unclear. He won’t be the designated hitter as the Sox have one of the best in J.D. Martinez. Schwarber may not be an upgrade on any of their outfielders, certainly not on defence.

The Athletics (61-48) have a solid starting rotation and very good bullpen with an above-average team defence. They may some excellent targeted additions at the trade deadline, which should benefit them over the last two months of the regular season.

Centre fielder Starling Marte, acquired from the Miami Marlins, is one of the best around. He is a unique combination of power and speed and is also a plus defender. Oakland also added lefty reliever Andrew Chafin from the Cubs. He is an outstanding setup man who can get right-handed and left-handed hitters out. The additions of utilityman Josh Harrison and catcher Yan Gomes provide high-quality, high-character bench players who can deliver in the clutch.

Oakland has always been a second-half team. The Jays will have to catch the A’s by outplaying them as I don’t expect the Athletics to fall back on their own.

The Yankees (59-49) have struggled at times this season and have played below many people’s expectations. But the reality is that, based upon their run differential of plus-15, a case can be made that they have overachieved.

Their pitching has been mediocre and their offence sub-par. Interestingly, they chose to address their offence and not their pitching in any significant way at the deadline. The additions of lefty sluggers Anthony Rizzo and Joey Gallo from the Chicago Cubs and Texas Rangers, respectively, will help their offence marginally. But the starting pitching is still questionable in the Bronx.

They are hoping for Luis Severino to return to ace form upon his return from Tommy John surgery. Corey Kluber is due back later this month as well, but his inability to stay healthy and maintain the quality of his pitches makes his impact uncertain.

The Yankees haven’t shown the ability to go on a long-sustained winning streak because of their deficiencies. They got better at the deadline but they don’t have enough to separate in the wild-card race.

The Seattle Mariners (58-52) are a young, exciting team. Things have come together for them sooner than expected. They were just supposed to be a tough matchup this season, with next year being the one where they start challenging for October baseball.

Their youth and inexperience is refreshing and they are starting to believe in themselves. But August and September separate the men from the boys. It is the time of the season when opponents make adjustments when they face one another. Young teams have a more difficult time making those changes because of their lack of experience.

The Mariners will likely fade out of the race. I can see them as an 84-win team but not much better than that.

The Blue Jays have a real shot to pull off two great months and earn a wild-card berth. Boston has a six-game lead over the Jays, while Oakland a three-game lead. The Jays have to hope that the Red Sox unravel, which would put both wild card-spots up for grabs.

Toronto plays seven more games against the Yankees, four versus the Red Sox, and three against both the Athletics and Mariners. This gives them a chance to impact all of the teams they are battling in the race. I believe the Jays can and will make the playoffs as the second wild-card team.

Hand hasn’t been great so far in his first couple of outings with the Jays. There has been some debate over whether Jays manager Charlie Montoyo should exclusively slot Hand in as the closer or base the closer role on the situation, possibly utilizing Jordan Romano as well.

I am not in favour of implementing a closer-by-committee plan. I believe pitchers need to know their roles.

The Tampa Bay Rays have been creative in their bullpen usage. They assign pitchers to segments of the lineup. Their best reliever would always face the best part of their opponent’s lineup, regardless of the inning. That is a way of defining roles but you need to have a weapon in the bullpen who best qualifies as the key matchup pitcher and then trust that multiple other relievers can get the final three outs of the game. The Jays’ bullpen hasn’t developed in that way.

That is not an easy role and not one that I believe Hand’s arm can handle at this stage of his career. Hand needs to be the closer and Romano the setup man.

It was a bit surprising that Rocker slipped to the Mets. He did have a bit of down year by his own standards but still separated himself as an excellent college pitcher.

It all started as normal with fanfare and excitement. The Mets agreed with Rocker’s camp on a $6 million signing bonus, contingent on his passing a physical. Unfortunately, the MRI showed an issue(s) with Rocker’s arm that caused the Mets pause. I have been through his myself with players. It is unfortunate.

Sometimes the club will engage the player in a renegotiation to mitigate some of the risk. It’s a tough negotiation because of the emotional distress the player obviously experiences. The Mets chose not to renegotiate with Rocker, which makes me believe the MRI was daunting.

The club has protection if they don’t sign their first-round draft pick as they get a pick one slot lower in the next year’s draft.

Sometimes a player will find another avenue to play professionally if he doesn’t agree with the MRI result. Japan is an option. Independent leagues could be an option as well. It doesn’t seem fair, but allowing a player to just sign with any other MLB team under these circumstances undermines the entire draft process. It also opens up the possibility of manipulating accurate reporting of health issues by players if their preference is to sign with another team for more money.

This issue falls into the category of “there is no perfect system.” If you are hurt, make the best deal you can, go back to college or choose another professional path. There is no alternative that is fair and eliminates potential manipulation.