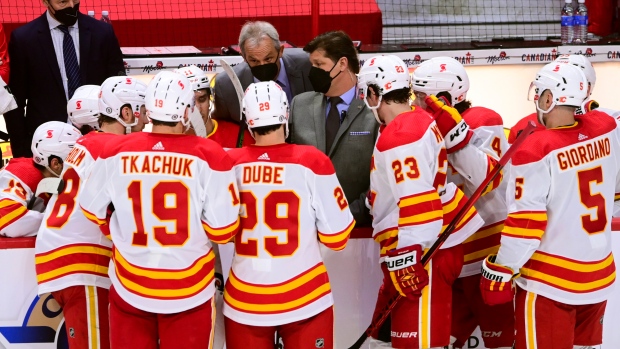 Six months after Darryl Sutter took over as the Calgary Flames head coach, general manager Brad Treliving has started to Sutter-ize the roster.

On the first day of Free Agent Frenzy, the Flames made one of the more surprising deals in the league by inking two-time Stanley Cup champion Blake Coleman to a six-year, $29.4 million deal.

Coleman, a Plano, Texas, native, rose to prominence after the Tampa Bay Lightning acquired him in February 2020 from the New Jersey Devils. The 29-year-old forward went on to become part of one of the most effective “third lines” in recent memory with Yanni Gourde and Barclay Goodrow.

Now, after what Coleman called a “fairytale” two years in south Florida, he heads north to the Texas of Canada to play for a team going through an identity shift following a nightmarish season.

“I have a role that can slot up and down lineups,” Coleman told reporters on Wednesday. “That versatility is the attraction of my game. I’ve had some success on all four lines in my career. I’ve played with really high-end skill and I’ve played with gritty forechecking lines.”

Coleman’s championship pedigree will be a major boon to a Flames team undergoing a transition in leadership after losing captain Mark Giordano to the Seattle Kraken in the expansion draft.

“There are experiences from our first playoff run that I used in our second, and so on [that] I expect to carry on in my future…just the locker room, how to handle ups and downs in the playoffs. There’s so many momentum swings and I remember in my early playoff experiences just getting caught up in those and they can really get away from you [when you] go down a hill too far, just keeping that even keel, just really understanding how long a seven-game series really is.”

“A lot of things attracted us to Blake,” Treliving said.

“We look at Blake as a guy who, even though he’s turning 30 years old, he’s only had five full seasons in the league. We think there’s low mileage here.”

While Sutter will ultimately determine the lines, Treliving made it clear that Coleman would get an opportunity to play a top-six role.

“My versatility is a big part of my game,” Lewis said. “I can play left wing, right wing, centre, wherever they need me, and obviously big on the [penalty kill], just forecheck, try and get in there, and be a good two-way guy.”

Treliving also acquired blueliner Nikita Zadorov from the Chicago Blackhawks, who right now slots in on the team’s second pairing, and goalie Daniel Vlader from Boston, who Treliving projects as Jacob Markstrom’s backup next season. He traded for forward Tyler Pitlick from the Seattle Kraken last week, too.

With those moves, the Flames should play a more physical, gritty, disciplined style, much to the appreciation of Sutter. All the skaters Treliving acquired are defensively responsible, competitive, and physical, providing an element sorely lacking from the team last season. Coleman and Lewis come with a combined four Stanley Cup rings and 140 playoff games.

Work does remain for Treliving. The Flames can’t replace Giordano but still need a reliable, defensively responsible blueliner who can move the puck and play in a top-four role. They could also use more depth at forward and defence.

Then there is the Johnny Gaudreau extension, with Treliving saying on Wednesday that there was nothing new to report on the star’s future with the organization. His limited no-trade clause kicked in on Wednesday, meaning the Flames can only trade him to five other teams before he becomes a free agent next July.

Over the past two weeks the Flames appear to have found players that fit their new identity under Sutter.

They’ll be hard to play against, finish their checks, block shots, and play low-event, defence-first hockey.

Whether that identity includes No. 13 remains to be seen.