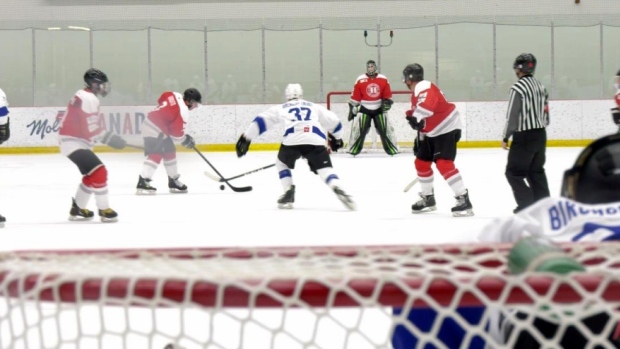 A Zoom call on Monday night might have the power to shake up hockey culture in Canada. At least that’s what the organizers are hoping for.

Canada women’s national team players Blayre Turnbull and Sarah Nurse both tweeted support for the online event, and a number of women’s hockey players were on the Zoom call. No professional men’s players amplified nor registered for the event. Minor Hockey organizations from the U.S. and Canada were in attendance; some hockey media and even Hockey Algeria participated. Notably absent was Hockey Canada.

Dr. Courtney Szto, a co-organizer of the online event, is one of four co-authors of the unprecedented policy paper on Anti-Racism In Hockey that was released earlier this year.

The paper was co-written by Associate Professor Dr. Sam McKegney, Black hockey historian Bob Dawson – the first Black player to play for St. Mary’s University in Halifax, and Anishinaabe graduate student and former player Michael Auksi. The 25-page policy paper is the first of its kind and was inspired by the Truth and Reconciliation calls to action.

In an interview with TSN via e-mail, Dr. Szto explained that the policy paper was an idea from a 2019 Roundtable on Racism conference held at Queen’s University where Drs. Szto and McKegney both teach. The 2019 conference keynote speaker, Eugene Arcand, is a residential school survivor and former hockey player. Arcand insisted that the organizers write a policy paper so that the discussions would not be static and could be pushed forward with tangible results.

According to Dr. Szto, a policy paper with concise recommendations might quell the usual need of hockey organizations and associations to form committees that seldom result in systemic change and take time and energy away from actionable items.

In addition to advocating for policy changes, the paper is a guide for players, coaches, officials and parents on how to re-educate on anti-racism practices, and provide practical strategies on how mainstream hockey culture can be “safer, more inclusive, and more accountable for its practices.”

Since its release in March 2020, the Anti-Racism in Hockey paper has been downloaded more than 3,200 times. Encouraged by this engagement, the authors concluded that having a public forum that centres the policy paper would be of benefit to the hockey community that has been grappling with discussions on race, and racism in hockey at every level. Registrants had the opportunity to download the policy paper and submit questions to the panel ahead of Monday’s event.

“The status quo is not good enough for our national pastime,” Dr. Szto said at the beginning of the Zoom call. The Q&A would be “focused on things that move from education to action.”

Auksi offered a land recognition then a sage burning ceremony. He explained that “the contributions, sacrifices and sufferings of Indigenous people over the last 500 years” needed to be recognized in order to come in the spirit of togetherness and for love of the game.

Dr. McKegney underlined the importance of shared labour in an anti-racist movement as to not burden BIPOC (Black, Indigenous and People of Colour) with the work dismantling white supremacy.

The first slide of the Q&A was titled “Why is Hockey Canada reluctant to get on board with this?” Dr. McKegney quoted a story previously reported by Rick Westhead of TSN that Hockey Canada was establishing an Equity, Diversity and Inclusion Task Team to begin tracking incidents of racist abuse, bullying and harassment. But Dr. McKegney suggested Hockey Canada’s interest in anti-racism action has been lacklustre, and that their “unwillingness or anxiety to participate in these conversations” is problematic at best.

He offered examples of their inaction: Hockey Canada did not reply to an invitation for the 2019 conference; they opted not to comment on the policy paper but confirmed receipt of receiving it; and were unable to attend the event. “Hockey Canada’s silence has been deafening to us,” Dr. McKegney said on the Zoom call.

He believes that an insider/outsider mentality is the root of this disconnect. In order to improve hockey culture, Dr. McKegney said Hockey Canada will have to be more transparent and accountable, including diversifying its board of directors, which is currently all white men, advocating for organizational change, and implementation of BIPOC player/family leadership roles.

Hockey Canada spokeswoman Esther Madziya did respond to TSN’s queries about the Anti-Racism in Hockey online event, confirming that a representative from the organization was unable to attend, but that Hockey Canada requested the team share the recommendations from the Q&A so that they could be “considered” by its Equity, Diversity and Inclusion Task Team.

After following up with Hockey Canada for clarification on who was part of the Task Team, what was the creation process, and whether there might be a liaison to the current board of directors, TSN did not get a reply.

Ironically, one of the recommendations in the Zoom call was specifically on a lack of diversity in hockey. Dr. Szto explained the policy paper authors see diversity and inclusion committees and panels as a distraction, and what is really required is a change of people in the system. A complete shift in power is the only conceivable way that hockey may become truly diverse.

A portion of the evening’s event was dedicated to Indigenous hockey communities and whether an Indigenous prep school might be feasible considering the systemic abuse and exclusion of Indigenous players, noting that the current pathways create a lack of access to elite minor hockey.

The Q&A also offered how merchandise can amplify Black-owned and Indigenous-owned businesses including Zale, and Section 35 that fights Native mascotry.

In addition to recommendations, the Q&A provided strategies for anti-racist learnings for parents, improvements on learning modules for coaches, and how players and families can safely report abuse. The online panel also had suggestions for the media- including not only asking BIPOC players about their experiences with racism and abuse, and using statements to hold teams accountable.

They offered links for resources, readings and even asked participants to follow racialized hockey media folks like Erica Ayala (a speaker at the 2019 conference), Black Girl Hockey Club as well as the Burn It All Down podcast. (Full disclosure: I am a co-host of Burn It All Down.)

There was guidance for players on how to create visibility with their voices, and how to capitalize on their privilege and platforms in order to “speak truth to power.” Dr. Szto, speaking to the women players on the Zoom call, offered examples of Maya Moore, Natasha Cloud and Imani McGee-Stafford: Black WNBA players who are leading the way on issues of paramount importance, and using their position as athletes to magnify the work they do.

The Q&A also provided suggestions around more equitable access to hockey by easing costs, and creating lending libraries for equipment for para-hockey communities. The panelists found that racial disparities were immense in junior hockey leagues due to costs, and socio-economic challenges. At post-secondary levels, the panel found that the hockey team rosters often did not represent the racialized make-up of campuses as a whole; furthermore data on racialized players was not collected by CIS/U Sports.

The policy paper and the resulting Q&A certainly offered a smorgasbord of ways to act, re-learn and participate in building stronger hockey communities.

“Education is an important aspect of anti-racism, but it doesn't mean anything if people don't apply what they have learned,” she said. “It is only through application that people can truly understand where the gaps lie and what else they need to learn about. I hope that people try something, whether it's starting a zero-tolerance policy, engaging in a conversation with their team, or getting rid of any merchandise that supports native mascotry.”

The concluding thoughts from the policy paper are the words of Dr. Angela Davis: “In a racist society it is not enough to be non-racist, we must be anti-racist.”

Shireen Ahmed is a writer, TEDx Speaker, and award-winning sports activist who focuses on Muslim women, and the intersections of racism and misogyny in sports. She is co-creator and co-host of the “Burn It All Down” feminist sports podcast. She lives in the Greater Toronto Area with her children and her cat.