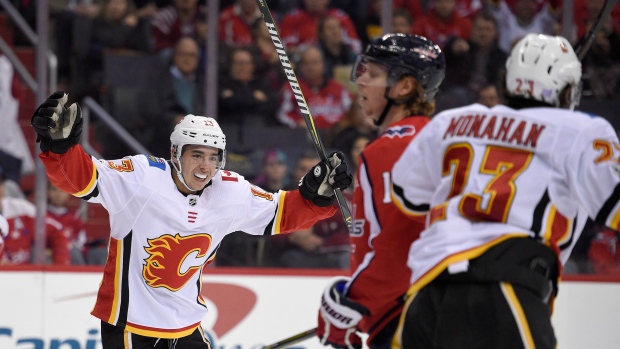 There are arguably two key moments signaling the end of heavy hockey’s dominance in the NHL. The first was the passing of the baton in Los Angeles. The Kings mercilessly pounded teams for years under head coach Darryl Sutter and general manager Dean Lombardi, combining unbelievable power with an ample dose of pure hockey skill. Los Angeles had perhaps perfected the roadmap created by their predecessor in the Boston Bruins under Peter Chiarelli’s watch.

But Los Angeles’ epic run eventually ran out. Some teams simply copied their playbook and rendered their combination of systems and talent redundant. Other teams ran in the opposite direction, searching for a new, speed-based market inefficiency. The Kings lost their competitive edge, and after multiple disappointing seasons, both the general manager and head coach were shown the door. With their exits, it was clear that the organization wanted to change their playbook to one that favoured hockey skill well above size or dimensions.

The 2017-18 Edmonton Oilers are destined to go down as the second key moment. Where most organizations have run towards the preference of skill and speed, the Oilers and Chiarelli embraced heavy hockey. Connor McDavid’s obvious draft selection aside, the team has made a concerted effort to target players who play a more forceful, old-school style. Milan Lucic is the most obvious example, but the targeting of Adam Larsson, Zack Kassian, Kris Russell and Patrick Maroon (to name just a few) show something of a pattern.

There have been plenty of takeaways from Edmonton’s disastrous season – a season that appears lost, even in January. One common complaint I’ve heard is that the Oilers look slow. It’s a shocking claim considering they have the fastest skater in the league, but it’s one I see as well. Another complaint I’ve heard: the team is frequently out of position on the defensive end (be it at even strength or on the penalty kill). It would appear that the system heavily emphasizes attacking puck carriers with the body.

Hitting is a tricky subject. Some hits are great – if you can separate a player from the puck and force a turnover, it’s a win. But hits that take players out of position are negatives. They frequently lead to lost structure and occasionally to odd-man rushes. In a world where opposition scoring chances are negative, taking yourself out of the play to land a hit can often be a dangerous proposition.

But this year is interesting. If you’ve noticed that the smaller, more agile, faster-paced teams have risen to the top of the standings, you aren’t alone. The biggest story in the league is Vegas, a 23-man roster that has skated just about every team out of the building this season. But a number of other teams – Tampa Bay and Nashville are other obvious notables – are in the same position.

There has definitely been a “rightsizing” in how teams are approaching the game. I looked at the median for hits-per-game since 2009-10, right around the dawn of that aforementioned Boston run. The number has come down considerably, particularly so in the last two seasons. 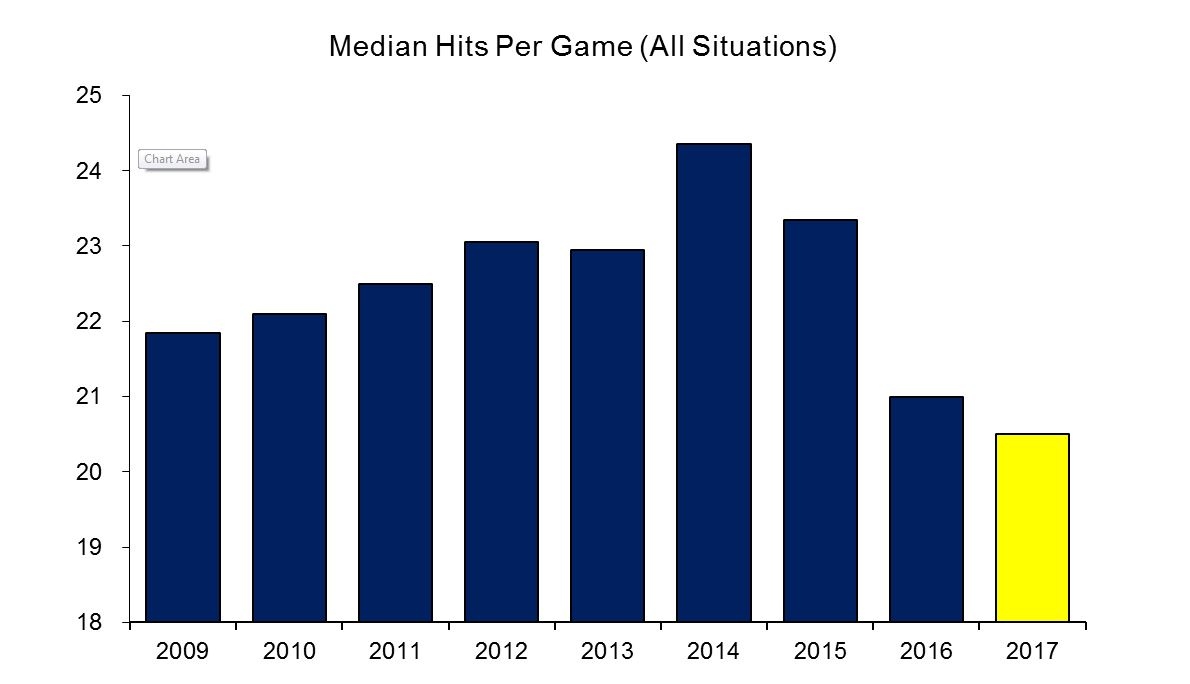 The data suggests hitting is down about 7 per cent in the last nine years and down 16 per cent since the 2014-15 peak. That’s a pretty remarkable rightsizing, perhaps indicative of the theory earlier about teams running away from the Los Angeles model once the talent and resources dried up.

Back to my original point on hitting. If you look historically at the correlation between hit frequency and win percentage, it’s been a mixed bag. Until this year. For the first time, there is a clear relationship developing between the two, and it’s a negative one. 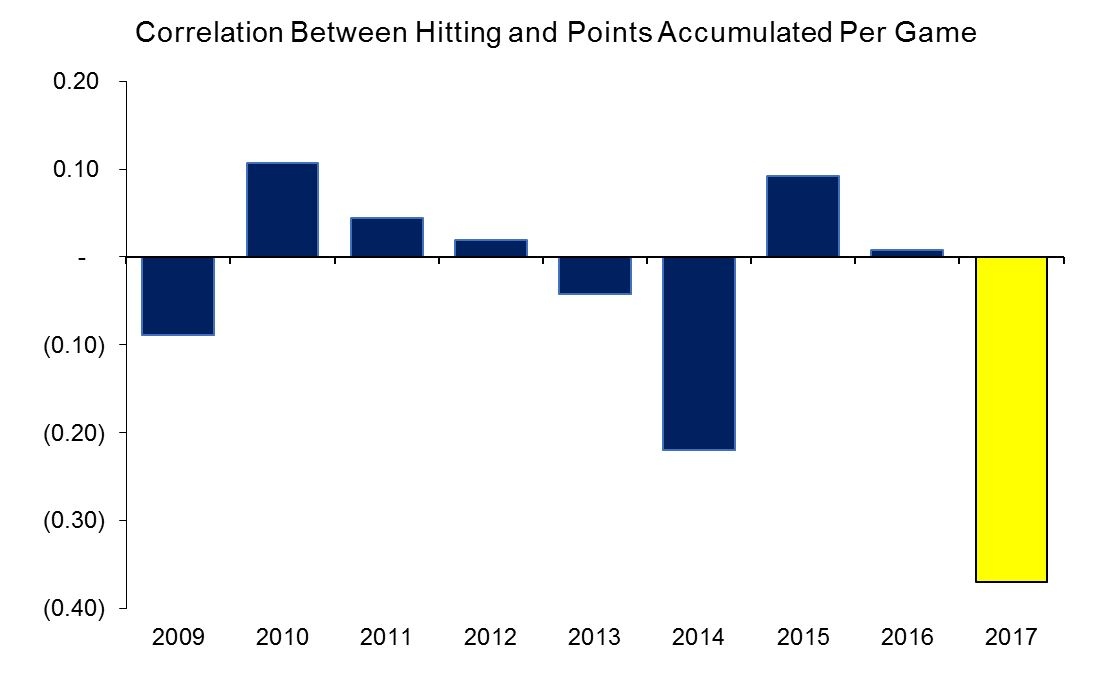 What does this suggest? At a high level, it indicates that the teams who are hitting more frequently in 2017-18 are accumulating fewer points. Now this hardly explains the entire story – there are myriad factors uncovered in this piece that may also explain why this statistical relationship seems to exist. But as it sits today, eight of the top 10 teams in hits (led by Edmonton) are currently on the outside looking in as it pertains to the playoff picture. Only Boston (fifth) and Washington (10th) currently qualify.

One last note on Edmonton. I call them out because their numbers are curiously higher than anyone else in the NHL. Median hits per game is right around 21. Three median absolute deviations from 21 based on each team’s hits data is as low as 15 hits per game and as high as 26 hits per game. Every team fits comfortably within that range, except for Edmonton at 27 hits per game.

While most of the league has moved towards pace and tempo, Edmonton’s moved in the completely opposite direction. It’s been the most curious of decisions considering the draft lottery reward of the blazing-fast McDavid. And, quite frankly, it looks like one of the big reasons why the team will be sitting at home when the playoffs start.