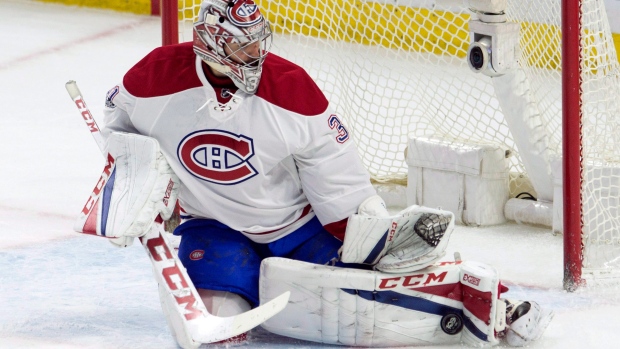 Though the race for the final playoff seeds will generate an awful lot of attention in the coming weeks, the majority of postseason-bound NHL teams are already eyeing potential first-round matchups.

One of the more fascinating debates right now concerns the inevitable crossover series in the Eastern Conference. Whether it’s the Montreal Canadiens or Ottawa Senators that capture the Atlantic Division, it’s a mathematical likelihood that the division winner will host a wild-card team – almost certainly the New York Rangers – that accumulated a greater number of points during the regular season.

The Montreal side of the debate – let’s assume for argument’s sake that they win the division – is particularly interesting. While I think a good portion of the fan base recognizes that the Boston Bruins or Toronto Maple Leafs may be mathematically weaker (and thus relatively preferable first-round opponents), they also look back at the schedule and notice that the Habs haven’t lost a game against the Rangers this season.

So, which scenario should a team prefer? Is historical head-to-head performance predictive of future outcome? Or, should teams always prefer to play the inferior team, regardless of what happened during the regular season?

Below, I pulled out every single playoff matchup since 2007-08 and compared the two teams based on a series of metrics. I also rolled up the opponents’ head-to-head goal differential in the applicable season. 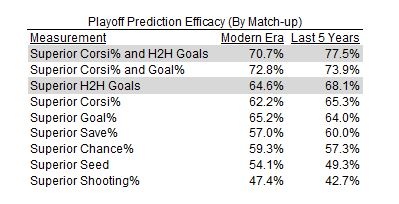 Those are fascinatingly high numbers. Although I’d like a significantly larger sample of games to truly ascertain which is the most predictive of all, I think we have a directional sense of which measurements matter and which measurements don’t.

In relative terms, know that goal rates and shot generation rates are very predictive playoff metrics – literally just picking a playoff winner on its goal or shot superiority will mean you can pin down about 10 of the postseason’s 15 possible matchups, and that’s before you really give the qualitative pieces of the head-to-head any thought.

What’s interesting though is that a team’s head-to-head goal differential against their given opponent(s) seems to matter just as much. As a standalone metric, head-to-head goal differentials have forecasted winners at just about the same success rate – and over the last five years, it’s actually marginally beaten out the likes of Corsi% and Goal% as alternative standalone measures.

You’ll notice that the top two, in terms of predictivity, are actually combinations of metrics. If you looked at every historical matchup in which a team – regardless of whether or not they were a favorite or underdog (it should be noted that differentiating between the two here doesn’t seem to matter) – had a higher percentage of the shot and goal share than their opponents, they win about 73 per cent of the time. Though nine seasons of data is still a bit limited, that certainly seems to be an upgrade over the individual metrics.

When you combine instances in which a team was superior in Corsi% and head-to-head goal differential, you’re at about the 75th percentile. It’s been particularly accurate over the last 75 playoff matchups, nailing 58 of those.

So, how does this play back to a team like Montreal? Well, one thing to keep in mind is that the Bruins – regardless of who is coaching them – have dominated the shot share all year (about 56 per cent). If you are looking for an opponent you have both had success against during the regular season and know you can reasonably out-shoot on most nights, the Rangers would satisfy that criteria, while the Bruins wouldn’t.

Definitely something to keep in mind as April approaches.