No matter how bullish you are on the Montreal Canadiens during this impressive postseason run, the reality is they are a sizable third-round underdog and facing their toughest opponent yet.

Montreal can very much win this series. If nothing else in the National Hockey League, we’ve learned disciplined and structured teams that are unwavering in their ability to protect the net always have a puncher’s chance. I would say that describes these Canadiens in spades.

We already know the challenge in front of Montreal. The Canadiens are playing a team that was 67 goals better than their opponents this season. Some of that goal differential was bolstered by the bottom of the West Division, which was a train wreck.

On the other hand, we have very high confidence that Vegas is as good as advertised. Their opening-round series win against a game Minnesota Wild team was the first indication, but their undressing of the Stanley Cup favourite Colorado Avalanche was the exclamation point.

But they are surely mortal. As one example, Vegas has long struggled to turn meaningful offensive zone time into goals in the postseason. The Vancouver Canucks (through Thatcher Demko) and Dallas Stars (through Anton Khudobin) both played the shell-and-counter game to perfection against the Golden Knights in last year’s playoffs. I imagine the effectiveness of that strategy only rises when you substitute either of those goaltenders for the likes of Carey Price.

There is a path for the Canadiens here. But it will mean solving these three problems.

It comes through all four lines. It’s a combination of speed, physicality, and ability to win loose pucks around the boards.

Over and over again in the Colorado series, Golden Knights forecheckers beat the Avalanche blueline deep into their own zone, won battles, and forced turnovers. The Golden Knights have done this all season long, though they have turned it up another level during the playoffs. If you are a Canadiens blueliner, well, this is nightmare fuel.

If nothing else, it is the Golden Knights’ one core competency. When they are able to free those pucks up, they get to work very quickly, funneling it back to the point to ignite a cycle-and-attack sequence.

It’s one of the big reasons why Vegas defencemen were some of the most active shooters in the league this season. In fact, at even strength, 39 per cent – second in the National Hockey League – of Vegas’ shot volume came from the blueline. The Golden Knights have routinely bet that these lower-percentage shots pay off in aggregate, as the team can generate additional volume off of rebound opportunities and hold opponents deep in their own zone.

You can see this play out through Vegas’ shot profile this season (via HockeyViz): 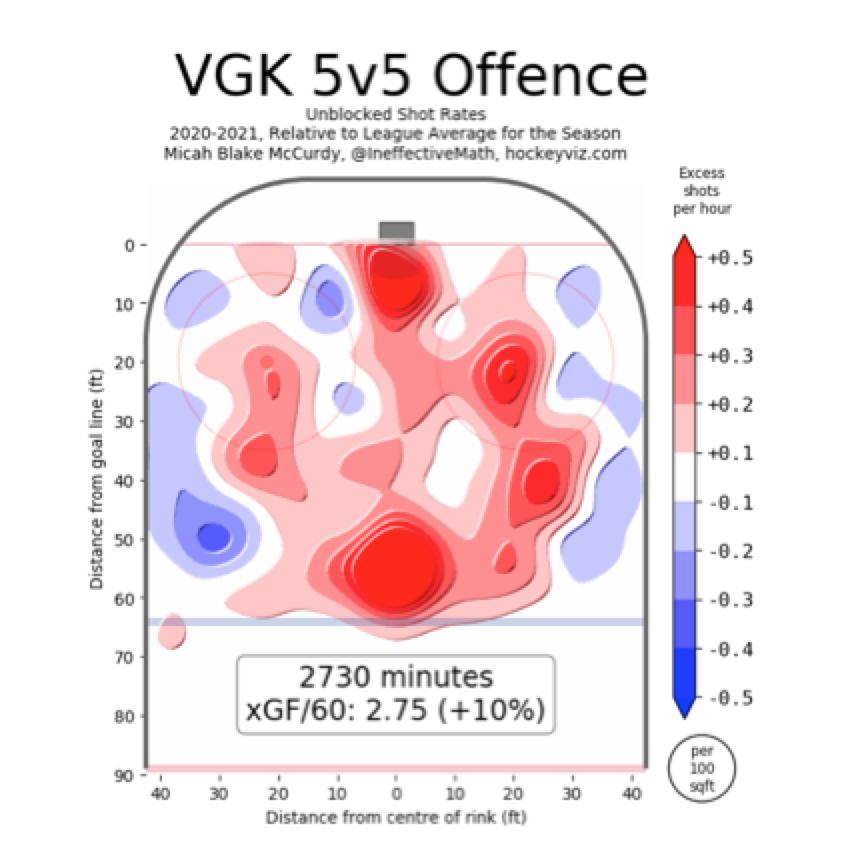 Problem #2: Montreal must minimize the impact of the Golden Knights’ top line

There is no Auston Matthews. There is no Connor McDavid. There is no Nathan MacKinnon. In fact, there is no player in the same stratosphere of offensive production on the Golden Knights’ top line.

But Max Pacioretty, Chandler Stephenson and Mark Stone have a compelling argument they make up the best line in hockey.

The interesting dynamic of this line is it’s built from the wings in, and not the centre out. Pacioretty is a first-line sniper who can score goals from any area of the ice, as Canadiens fans well know. On the other wing may be the best all-around winger in the league. Down the middle of the ice is the lesser-known Stephenson – a depth player in Washington before he was traded two years ago. Stephenson brings one critical dynamic to this line that neither Pacioretty nor Stone possess, and that’s raw speed.

Stephenson’s career has exploded since that trade. I likened his performance to GameStop’s stock price surge last January – I mean, look at how the goals have played out for Stephenson before and after the trade. 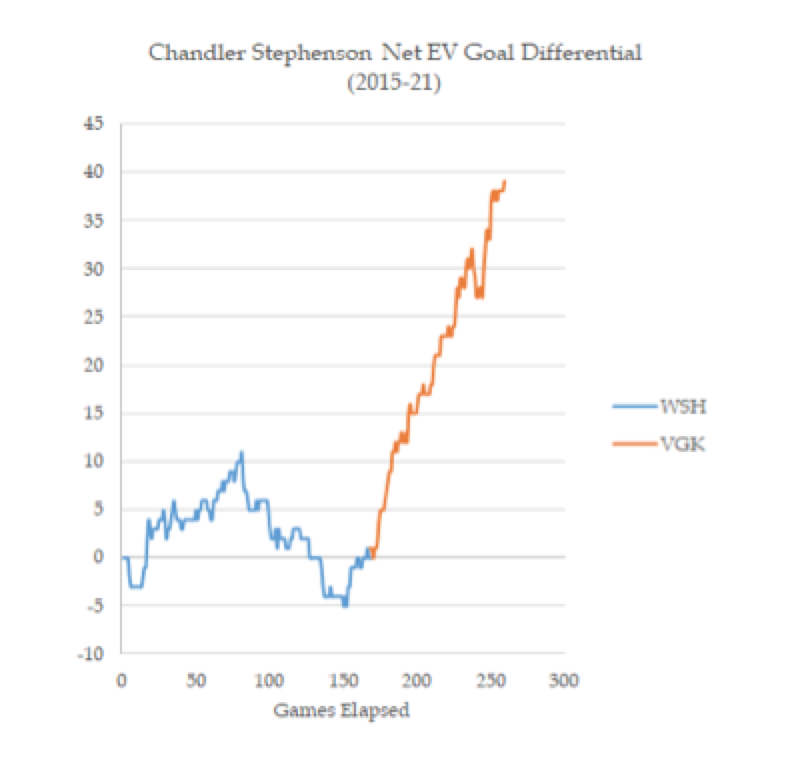 They are not the most dangerous line Montreal has seen, but they do generate plenty of offensive volume, and scoring against them seems impossible on most nights. It’s why in 440 minutes together this season they finished 21 goals (22 expected) better than their West Division opposition this year.

Problem #3: Carey Price needs to be better than Marc-Andre Fleury

Both of the goaltenders taking the ice for this series are headed to the Hall of Fame. Canadiens fans are over the moon with Price’s postseason resurgence – it’s the single-biggest reason why they are positioned four games out from the Stanley Cup.

On the other hand, you can make a similar argument for Marc-Andre Fleury. The Golden Knights may have a more talented roster in front, but they don’t get by a team the calibre of Colorado without Fleury stopping 92.3 per cent of shots this postseason. (If nothing else, look at the playoff failures of Vegas in years past, where Fleury was shelled and the team fell apart.)

Considering the talent gap at the skater level, Montreal needs an equalizer, and Price may just be that. The Canadiens have done an outstanding job protecting the front of the net, and that’s a carry-over from the regular season, especially at 5-on-5: 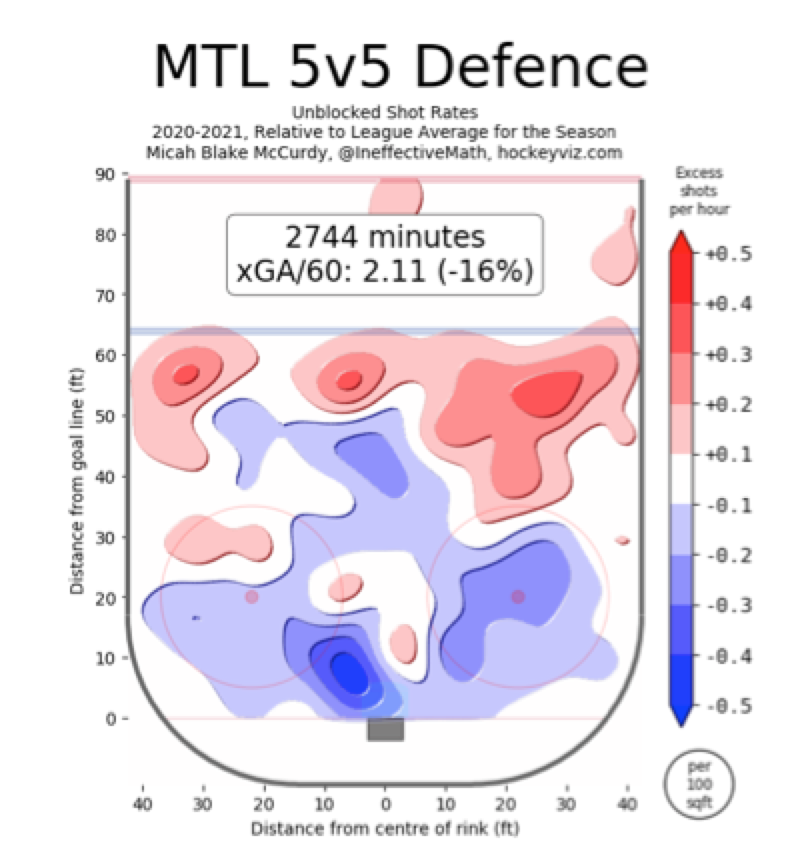 The single biggest difference between Montreal of the regular season and Montreal of the postseason is that Canadiens goaltenders have done a much better job acting as a safety net, bailing the skaters out when the team gets into trouble. Price stopped just 90 per cent of shots faced during the regular season, which was a big contributor to the team’s negative goal differential this year.

But Price has turned it on in a big way since the playoffs began, and a goaltending advantage in this matchup may be the factor that could turn the tide in favour of Canada’s last team standing.