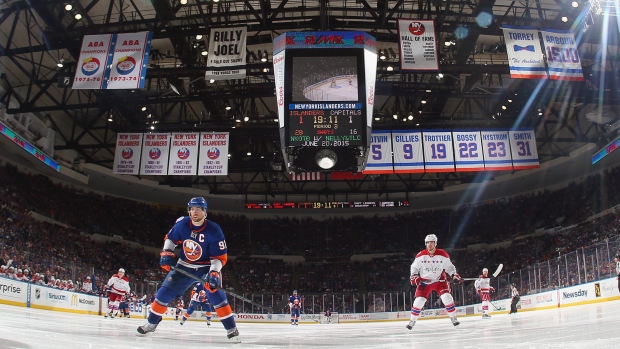 It may finally be time to say goodbye to the Nassau Coliseum, which is a good thing, really.

The New York Islanders are leaving a rink that hasn't belonged in the NHL for quite a while, but there is fondness for the memories it evokes and for the great teams it has housed. With apologies to the Washington Capitals, the last memory should not be a loss. That will be the Islanders' rallying cry tomorrow.

They will hope to win Game 6 so they get a chance to come back for more games after beating the Capitals in a seventh game on Monday. If that happens, when and how the Isles depart the barn in Uniondale will be determined in another series against another opponent, and OK, it's permissible to imagine the Islanders meeting the Rangers under those circumstances.

But first things first -- the curtain falls if the Islanders lose tomorrow. That's not the proper ending. Give the loyal fans a chance to cheer a win, hoping it's not the last one, but knowing it might be.

Thumbs up to Filip Forsberg, the early-season favourite to win the Calder Trophy who, as it turns out, won't even finish third in the rookie voting. In no way is that his fault. Forsberg was the Nashville Predators' regular-season scoring leader with 63 points, but two other rookies managed to score 64 and in other ways, Calgary's Johnny Gaudreau and Mark Stone of the Ottawa Senators stole the Calder spotlight.

Florida defenceman Aaron Ekblad was in it all year, and might benefit from the fact that Gaudreau and Stone will split votes meant for the best forward. Meanwhile, Forsberg goes about his business in the playoffs, and last night's hat trick against Chicago was a nice reminder of how good he is.