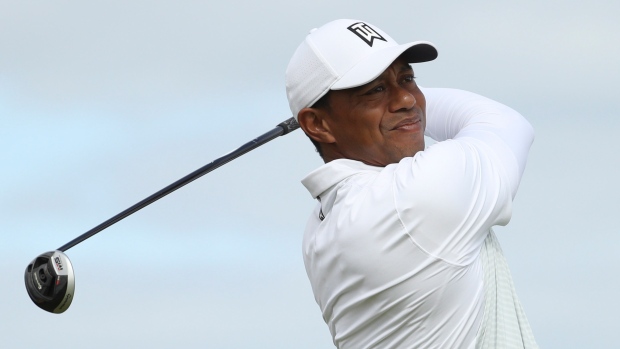 PORTRUSH, NORTHERN IRELAND – Tiger Woods limped up the 18th fairway looking about as comfortable as a man walking barefoot on broken glass. He stretched and grimaced, trying to find some sort of comfortable position but without much satisfaction.

When he tapped in for a bogey for a round of one-under 70, it marked the end of a miserable Open Championship and a quizzical major season.

It started with a remarkable win at the Masters and fell away after that with two missed cuts, a mediocre performance at the U.S. Open and a lot of questions.

Welcome to the future of Woods, a guy who may have a few brilliant tournaments left in his arsenal, but who is far more likely to have weeks like this one, where he fights to keep his broken-down body together long enough to finish a round or a tournament.

“That's one of the hardest things to accept as an older athlete,” Woods admitted after missing the cut for the seventh time in his last 13 major starts, “is that you're not going to be as consistent as you were at 23. Things are different.”

They most certainly are. Woods is a patchwork of stitches and scars from his feet to his shoulders, collected over the years alongside his tournament wins. It’s not a miracle he’s playing golf as well as he does, it’s more that he’s not in a wheelchair.

Woods’ post-round comments were really his way of saying that the surgically repaired back that gave fans so much hope last year and at the start of this year is still just that, a surgically repaired back. It has limitations and a finite number of swings left in it. There was no miracle fix for his pain, just a repair job that allowed him have a normal life.

Those who questioned why Woods didn’t play between the Masters and the PGA, or after the U.S. Open leading up to this week, now have an answer. He only has so much gas in the tank and he’s going to be a miser in choosing when he uses it.

“Let's be honest,” he admitted. “I don't have the flexibility I used to have, and never will. So I'm going to have to make those adaptations.”

Those include swing adjustments, regular visits to physiotherapists, and rest. Lots and lots of rest. There’s a good chance he doesn’t touch a golf club for an extended period of time when he gets back to his Florida home.

Woods will re-appear for the FedEx Cup playoffs in two weeks. If he plays all three of those events, he’ll reach 13 for the season, down from the 18 he played last year. There’s a possibility he may play even less next season. He won’t play any more.

But this isn’t the end of Woods as a threat, at least not in his eyes. He still believes there will be more trophies to put in the cabinet and possibly more green blazers to slip on.

“I'm going to have my hot weeks,” he predicted. “I'm going to be there in contention with a chance to win, and I will win tournaments. But there are times when I'm just not going to be there. And that wasn't the case 20-some-odd years ago. I had a different body and I was able to be a little bit more consistent.”

Woods is bluntly facing reality. He knows his body and what it’s capable of, and he knows there’s no way around what he can get out of it. That’s fine. We just need to hope for a few more of those great weeks and understand the other ones.