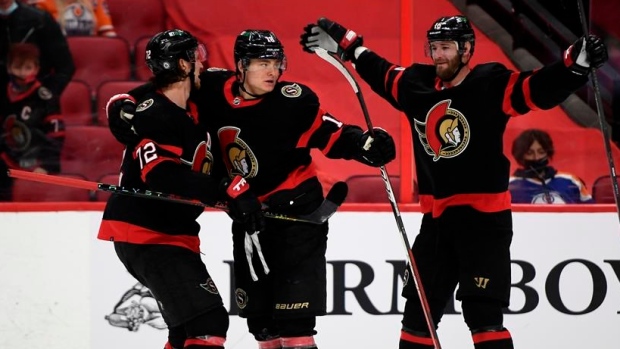 OTTAWA — The last thing the Ottawa Senators want to see is Tim Stutzle fighting, but on this night the young centre will be forgiven after scoring a highlight reel goal in overtime to lead his team to a 3-2 win over the Edmonton Oilers.

With 37.6 seconds remaining in overtime Stutzle put the puck to the top corner to beat Mikko Koskinen.

“I actually tried to see if (Thomas Chabot) was open, but then I’m like I saw the little spot up there and just tried it shoot it and it went in.”

It was an impressive outing for the 20-year-old who created energy all night long, but it was his willingness to drop the gloves against William Lagesson late in the third period that will likely be remembered.

Stutzle said he doesn’t remember who dropped the gloves first, but he’s happy to have his first NHL fight out of the way.

“Maybe a little bit stupid to go and fight there, especially that late in the game, but I kind of got aggressive there and tried to stand up for myself,” said Stutzle. “I think it got the team going a little bit more there and they were coming. It was fun."

That being said the Senators would prefer the young forward to leave the fighting to others.

“Let’s be clear, you don’t want (Stutzle) fighting ever,” said Senators coach D.J. Smith. “He gets in a fight, comes back and does what he does. I mean, we’ve got a real, real hockey player on our hands.”

Connor McDavid and Darnell Nurse scored for the Oilers (22-16-3) as Koskinen stopped 28 shots.

The game wrapped up a four-game homestand for Ottawa, who will take on the New York Islanders Tuesday night in their final game before the all-star break.

While Stutzle had the late-game heroics Smith couldn’t help but heap praise on Paul for his overall effort.

“I thought (Nick Paul) was our best player on the ice for us,” Smith said. “There’s very few people in the world who can skate with (Connor) McDavid, especially a forward backwards, and he did in overtime.”

The Oilers will take on the Washington Capitals Wednesday for its final game.

“Obviously, we’re disappointed we didn’t get the other point there”, said Derek Ryan. “I don’t know if we played well enough through 60 minutes to deserve a win, in my opinion, but good on us to battle through and stick with it.”

Chabot opened the scoring as he fired a wrist shot that was stopped, but the puck went high and slid down Koskinen’s back and across the goal line.

Seconds later Evan Bouchard took advantage of a bad line change by the Senators and fed McDavid a stretch pass who beat Murray with a slapshot through the legs.

Ottawa regained the lead late in the second period on a power-play goal as Paul, with his eighth of the season, jumped on an Erik Brannstrom rebound.

Trailing 2-1 the Oilers were able to tie the game at the seven-minute mark of the third as Ryan made a great pass to a trailing Nurse, for his fourth of the season.

“I think we could’ve probably had another step up in our effort, especially in the middle of that game,” said Nurse. “But with that said, we found a way to get a point. We haven’t been doing that much lately.”

This report by The Canadian Press was first published Jan. 31, 2022