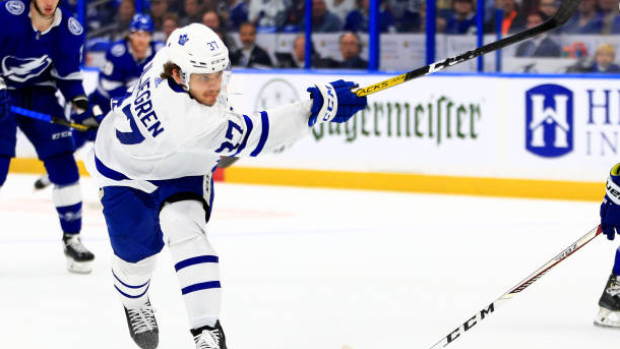 With Tyson Barrie and Cody Ceci set to become unrestricted free agents, there could be a huge opportunity to seize a job on the right side of the Maple Leafs defence next season.

Liljegren played 11 National Hockey League games this season, seeing limited minutes in a sheltered role. With the Marlies, he played big minutes while posting 30 points in 40 games and suited up in the American Hockey League All-Star Classic.

"Pretty consistent," he said of his minor-league campaign. "I started off pretty good and got better every week and every game. Eventually I got that NHL debut and it was a dream come true. Once you get that first game you just want to play more games. Once I came back down to the Marlies after that first game I tried to work harder so I could go back there again."

Liljegren​, Toronto's first-round pick, 17th overall, in the 2017 draft, spoke to TSN via Skype on Thursday from his condo in Angelholm, Sweden.

The soon-to-be 21-year-old reflected on his NHL experience and ​revealed the improvements he has made on the mental side of the game. Liljegren also spoke about Sweden's relaxed approach to the COVID-19 pandemic and what he remembers about his dance on the bar at Real Sports after the Marlies Calder Cup championship in 2018.

You made your NHL debut on Jan. 18 against Chicago. What do you remember about that night?

"I remember it was military [appreciation] night, so everyone was lined up on the bluelines for national anthems and we don't really have that in Sweden. We had that with the Marlies, so that was pretty special when I first came over. But to be at Scotiabank [Arena] with a full crowd and everyone singing was awesome. I got goosebumps. I wasn't really nervous before that, but when that happened I got kind of nervous."

Thank you for your service and sacrifice, @CanadianForces. pic.twitter.com/sQZylD6lSM

You were the 1,000th player to ever suit up for the Leafs franchise, did you know that?

"I did know that. They told me. I don't know who told me, but that was kind of cool."

How do you feel about your 11 NHL games overall?

Outside of the atmosphere in the rinks, what's the biggest difference between the AHL and NHL?

"Just overall skill. There's a lot more skill in the NHL and not as much hitting. I thought there would be more hitting. The Toronto organization does a good job of preparing guys in the AHL for how it's going to be once you get up to the NHL with all the resources and all the meetings. It's kind of similar to what they do with the Leafs. I was kind of prepared for all the other stuff, like in the locker room. I was called up like three or four times before I played my games, so I got to know the guys in the locker room a little bit and that helped. So, just overall there's more skill."

Did you have a welcome-to-the-NHL moment on the ice in any of the games?

"We played Buffalo one game and it wasn't meant for me to be out with [Jack] Eichel, but we had an icing and they put the Eichel line in and that was kind of cool to play against that guy. Seeing Patrick Kane, Jonathan Toews in my first game also. It was fun when we played Blackhawks, because one of my good buddies is Adam Boqvist. I played against him and that was a pretty cool experience."

Did you guys talk on the ice?

"I tried to talk to him a little bit, but he's a pretty focused guy once he gets on the ice, so it was kind of hard."

You picked up your first point on a goal by Jake Muzzin in Ottawa on Feb. 15. What did you notice being around him?

"He's one of the guys that talks a lot and he talks to everyone and makes you feel comfortable. Just a fun guy to have in the locker room. He has a lot of experience, so I think for young guys, especially like me, that's a guy you want to listen to. Just a good guy overall."

You and fellow Swedish defenceman Rasmus Sandin had some good chemistry going in the AHL. What stood out about his season?

"He had an unreal year. He played really good at the start of the year when he made the team and then when he got sent down he just continued playing well. I was happy to be playing with him again. Then he went to World Juniors and just was unreal. He had a real good year and we're good buddies, so I'm happy for him."

Where do you need to improve moving forward?

"Just keep working on everything basically. Just get stronger to hold onto guys in the defensive zone. Just try to work on playing the same type of game I play with the Marlies, but up in the NHL. So, just get that confidence to be able to do that."

In the past you've talked about being too hard on yourself when you make a mistake. What progress have you made on the mental side of the game?

"I don't really feel pressure from other people, because the pressure on myself is often higher. I've been working with [Leafs director of high performance] Rich Rotenberg with that stuff. This year I just, it sounds weird, but [I thought] f--k it. I don't know if I can say that, but you know what I mean? Like, it goes how it goes and that helped me a lot. Hockey is everything for a lot of people, but I think this corona situation keeps things in perspective. Like, it's worth a lot, but it's not everything, so I think that's a good mindset to have and that's helped me a lot."

What's your average day like right now? What are you up to?

"Not much. Just trying to keep my routine going so go out around 9 [a.m.] and do my workout and then hopping on PlayStation and try to pass the time. That's mostly it."

What’s it like in Sweden where physical distancing regulations aren't as strict with restaurants and most business still open?

"I left Toronto before the strict rules came into place, but there's not many rules in Sweden for now. It's just social distancing and try to wash your hands and stuff like that. I try to follow the Leafs recommendations as much as I can, but it's a strange situation because the regulations here in Sweden are different."

Do you go out at all?

"I do workouts and get some fresh air, but trying to stay in and not go to crowded places and stuff like that."

Are you able to skate?

You have a birthday coming up at the end of the month. With the relaxed regulations in Sweden, any idea what you might do?

Did you see the video of the Nylander brothers doing Drake's Toosie Slide dance?

"I did (laugh). It was great. You see a lot of TikToks right now because of the quarantine. That was a lot of fun. They're fun guys. Willy is a fun guy so it didn't surprise me that he was in it."

You are also known for some dancing skills. There was a fun video of you on the bar at Real Sports after the Marlies won the Calder Cup in 2018. What do you remember about that night?

"Not a lot. That was when the Fortnite game was all hyped up so I tried to do some of the Fortnite dances. That's all I can say."

don’t let this recent #Marlies win distract you from the fact that Liljegren is the best dancer on the team. pic.twitter.com/rB1uOoG5BN