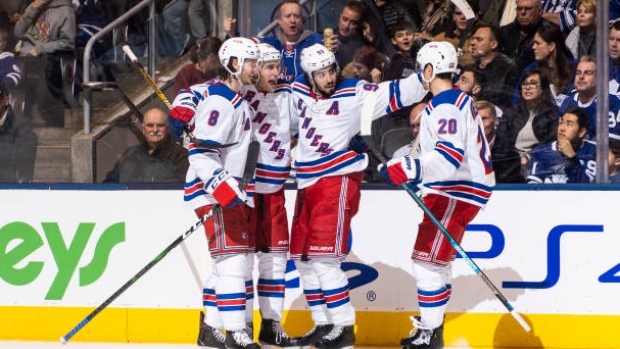 TORONTO — The Toronto Maple Leafs found out what life is going to be like without defenceman Jake Muzzin, the lone Stanley Cup winner on their roster.

The Maple Leafs learned before their 5-4 overtime loss to the New York Rangers on Saturday, in which visitor Artemi Panarin set up three goals including Tony DeAngelo's winner, that Muzzin will be out week-to-week with a broken foot.

Muzzin and forward Ilya Mikheyev were lost long term with injuries suffered in Toronto's 5-4 overtime win in New Jersey on Friday. Mikheyev expects to be gone a minimum of three months after a scary incident that required surgery to repair his lacerated right wrist.

"We miss Muzz," said Toronto head coach Sheldon Keefe, now 12-4-1 since he took over. "It's more than what he does on the ice for us. There are a lot of intangibles he brings from in the locker room to the bench, talking between whistles, and all those things.

"Everything," he said when asked about Muzzin's absence. "A lot of leadership, a lot of physicality. He held guys accountable in the dressing room. Obviously, we're going to miss him quite a bit, but it's an opportunity for others to step up."

Matthews also remarked Mikheyev's absence will leave a hole. Matthews admires the way the 25-year-old Russian has come to Toronto, learned a new language and fit in with his solid two-way play.

The Maple Leafs could have used some of Mikheyev's checking ability as well as Muzzin's stinginess in the defensive end as the Rangers turned Saturday's game into a run-and-gun affair.

The Rangers held leads of 3-1 early in the second period and 4-2 after 40 minutes.

New York's Brett Howden and Ryan Strome sandwiched goals around one from Maple Leafs forward William Nylander in the second.

Strome, with his second, and Mika Zibanejad did the same in the second period around Matthews' first of two.

"There was a buy-in tonight. For us to come in here on the road against a very good team, in a very hard building to play in, and come out with two points is big for us," said Rangers forward Chris Kreider.

Matthews missed a glorious chance in the late going when he shot high with Rangers goalie Alexandar Georgiev down. But Matthews redeemed himself with a slapper that evened the game with 53 seconds remaining in regulation time.

"We're proud of the way we battled back," he said. "Coming into the third, we weren't discouraged. The way these teams play — high-powered offences — we knew we were going to get our chances."

In Mikheyev's absence, 23-year-old Adam Brooks made his NHL debut. The Winnipeg native played in 171 regular season and playoff games for the AHL Toronto Marlies before playing in his first NHL game.

He found out late Friday night that he was going to play. His parents were able to make it in from Manitoba to watch his debut.

"It was a day I will always remember," he said.

"It was an awesome experience."

This report by The Canadian Press was first published Dec. 28, 2019.