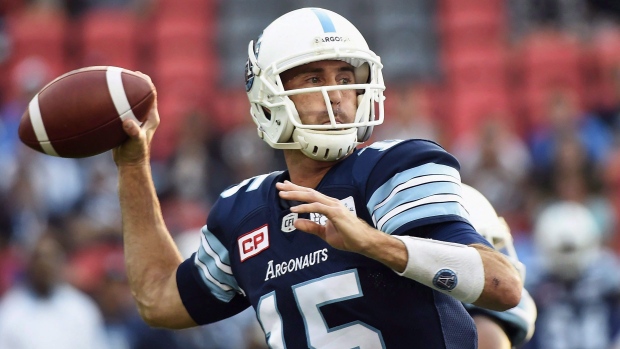 TORONTO — Ricky Ray is calling it a career.

The veteran quarterback made the announcement on a conference call Wednesday.

The move isn't a surprise as Ray, 39, was coming off a season-ending neck injury suffered while playing with the Toronto Argonauts. Ray has played 17 seasons of pro football, 16 in the CFL.

Questions regarding Ray's CFL future began to arise moments after he left BMO Field on a stretcher with his head immobilized in the third quarter of Toronto's 41-7 home loss to the Calgary Stampeders on June 23. Ray was hurt after being sandwiched between Calgary defensive linemen Ja'Gared Davis and Cordarro Law and play was halted for over 20 minutes as medical personnel treated Ray.

One of the greatest to ever do it.

After winning a Grey Cup title with Ray in 2017, Toronto (4-14) never recovered from losing him last year, finishing last in the East Division with the league's worst record, which ultimately cost head coach Marc Trestman his job at season's end.

But in 2017, Ray made 17 starts and passed for 5,546 yards with 28 TDs and 11 interceptions in leading Toronto to a Grey Cup championship in the club's first season under Trestman. That title was a record fourth for Ray as a CFL starting quarterback and second with the Argos (first was in 2012).

Ray leaves the CFL as one of its most prolific passers. He stands second in career passing percentage (68.16 per cent), behind only Trevor Harris (70.36), who remains active with the Edmonton Eskimos.

Congratulations to Ricky Ray on a remarkable CFL career. We wish you the best in your retirement.

Ray is third overall in all-time completions (4,976) and fourth in both attempts (7,301) and yards (60,736). Ray joins Anthony Calvillo, Damon Allen and Henry Burris as the only quarterbacks in league history to have thrown for over 60,000 career yards.

I would just like to congratulate Ricky Ray on a remarkable career and wish him all the best in his retirement. pic.twitter.com/FPqfOy5X5K

However even as Ray contemplated his future, there were clear signs Toronto had started preparing for life without him. When CFL free agency opened in February, GM Jim Popp went hard to sign veteran quarterback Bo Levi Mitchell before the pivot decided to remain with the Grey Cup champion Calgary Stampeders.

The Argos have installed former backup James Franklin as the starter heading into training camp and signed free agent Brandon Bridge, a native of Mississauga, Ont., to a one-year deal. The club left the door open for Ray's return, but more as a backup and mentor for the team's younger passers.

Toronto acquired Ray from the Edmonton Eskimos prior to the '12 season. He completed 321-of-468 passes (68.6 per cent) for 4,059 yards with 20 TDs and 11 interceptions and led the Argos to an exciting 35-22 victory over Calgary before a Rogers Centre sellout of 53,208 spectators in the historic 100th Grey Cup game that year.

After making a combined 27 starts the next two seasons, injuries limited Ray to just 12 starts over the 2015-16 seasons. In November 2014, Ray had surgery to repair a torn labrum in his right (throwing) shoulder and small tear in his rotator cuff.

Ray's recovery went slower than anticipated and he appeared in just three games in 2015. However, the Argos signed him to an extension in the off-season — Ray had been scheduled to become a free agent — and after starting the club's first five games of 2016, he sustained a knee injury that forced him to miss three contests.

The biggest blow, though, came in the annual Labour Day game in Hamilton when Ray suffered a partially deflated lung that kept him out of action until Oct. 31 when Toronto lost 31-13 to Calgary to officially be eliminated from the CFL playoff contention en route to posting a 6-12 record.

The club fired GM Jim Barker shortly afterward, then found itself in the market for a head coach when Scott Milanovich resigned to become an assistant with the NFL's Jacksonville Jaguars. In February 2017, the club named Popp and Trestman as GM and coach, respectively, and the latter immediately installed Ray as his starter.

Over his seven seasons in Toronto, Ray appeared in 72 of the club's 126 regular-season contests.

Ray was a model of consistency to start his CFL career, making 18 regular-season starts six times and at least 16 in seven of his nine years with Edmonton. He led the Eskimos to Grey Cup titles in 2003 and '05.