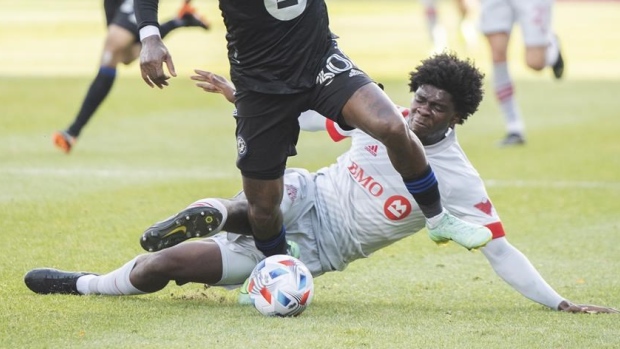 "My time with Toronto will always hold a special place in my heart," he wrote. "You have been my home for the past six years of my life and I have so many great memories that I will always cherish.

"I’ve made friendships that will last a lifetime and will always be there for you guys. Thank you for giving me the opportunity to not only develop as a player but to grow as a man."

Dunn said he was "thrilled" to be joining HamKam in 2022 and looked forward to "this new chapter in my career."

Dunn is out of contact with TFC at the end of the year, as are midfielders Liam Fraser, Nick DeLeon and Tsubasa Endoh and forwards Erickson Gallardo and Ayo Akinola.

Based in Hamar, HamKam won promotion to Norway's top tier last month. It is no stranger to Canadian talent, with the Vancouver Whitecaps sending striker Canadian Theo Bair there on loan in August.

Dunn signed with TFC in April 2018, becoming the 18th homegrown player to sign a first-team contract from the academy. He had spent the three previous seasons with Toronto FC II.

The Canadian youth international made his MLS debut on April 14, 2018, when he came on as a substitute against Colorado Rapids and made his first start a week later against the Houston Dynamo.

Toronto loaned Dunn and fellow defender Dante Campbell in August to Valour FC of the Canadian Premier League in August 2020 for the duration of the 2020 season.

Dunn, who made three MLS appearances in all for Toronto, started in the Canadian Championship final loss to Montreal on Nov. 21.

He made his international debut against Costa Rica at the 2017 CONCACAF Under-17 Championship.

This report by The Canadian Press was first published Nov. 9, 2021