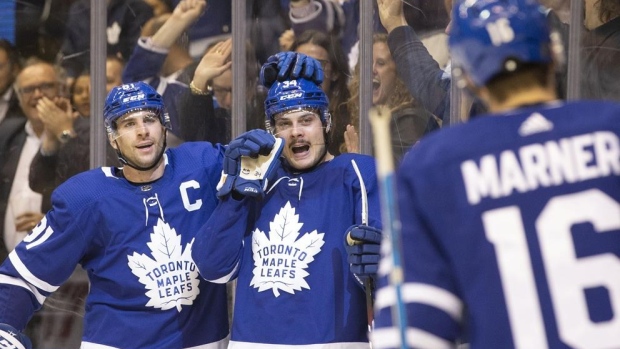 The intensity is rising at Maple Leafs training camp. On Sunday, for the first time, Toronto held a full 60-minute scrimmage. The previous scrimmages had been 40 minutes. The players also wore their game sweaters. Previously they had worn practice jerseys.

"The pace was a lot faster," said head coach Sheldon Keefe. "It was a lot more competitive, every stride just had a little extra push to it. The puck was moving a lot quicker. We had a talk with the team and just told them that it's time that things really go up another level here."

Unlike on previous scrimmage days, the team didn't hold a practice prior to the game so everyone was fresh. And three breaks were incorporated in each period to mimic television timeouts. Keefe also sent a jolt through the group with some creative line juggling. Most notably, he put John Tavares on left wing with centre Auston Matthews and Mitch Marner.

"It's an All-Star Game line so that can't be fun to play against," observed defenceman Tyson Barrie, who sprung Matthews and Tavares for a 2-on-0 rush in the second period. "It's fun to get out there with them and you can see the way they throw the puck around."

The highly-skilled trio did what you'd expect dominating possession and putting the puck in the net. Matthews potted a pair (one on the power play) while Marner also scored a highlight-reel goal.

If the Leafs are trailing late in a game in the playoffs, don’t be surprised if Tavares, Matthews and Marner are reunited.

"We're pretty familiar with each other," said Matthews. "We've played with each other sporadically throughout the season and on the power play ... I thought our first period wasn't bad, wasn't great. I thought the second and third we started to control the puck a lot better on the attack and started to hem the other team in their end a little bit. I thought those were positive signs. I'm not really sure what the lines will look like come Tuesday when we're back on the ice, but obviously we were trying some new stuff out there today."

With Zach Hyman sidelined with a minor issue, Sheldon Keefe took the opportunity to experiment with his lines, which included pairing Auston Matthews, John Tavares & Mitch Marner.@markhmasters has more on how the trio looked: https://t.co/6YrONIR98J#TSNHockey pic.twitter.com/1OsZTDucCP

Among the other line-up tweaks Keefe introduced on Sunday, William Nylander shifted to centre on a line with Ilya Mikheyev and Adam Brooks.

"He did well and had the puck a great deal offensively, coming up through the middle of the ice," Keefe said of Nylander. "He's a lot more dangerous that way so we like that part of it. He and his line had the puck, they played on offence and didn't have to defend a great deal. Of course that's something that would take the most time to be comfortable with. He's played centre before and it's not a big adjustment for him."

In fact, Nylander played centre in last year's playoffs after Nazem Kadri was suspended. So, in which scenarios would Keefe employ the Swede in the middle?

"In terms of what may have to happen for us to go to it a little more long-term, I don't have that answer," the coach said. "I think that I'll just kind of react to what's happening. I think that we'll see him shift back to wing here going forward, but it's nice to have that option."

Among other new looks on Sunday, Travis Dermott switched to the right side on a pairing with Morgan Rielly. The duo had skated together during part of the Phase 2 workouts. Meanwhile, 18-year-old Nick Robertson skated alongside Alex Kerfoot and Kasperi Kapanen.

"I don't think I'll ever want to be too locked in to anything and I like to keep our players on their toes as well," Keefe explained. "All of that kind of stuff gives us additional options to remain flexible."

While predecessor Mike Babcock seemed reluctant to shuffle lines even in practices, Keefe sees value in testing out different combinations even in a truncated training camp with the playoffs just around the corner.

"Going into a playoff environment where you don't know what you're going to face, the opposition has it's challenges of course, the ups and downs of a playoff series, but then also injuries or any type of circumstances that might alter your lineup,” Keefe said. "We try to reduce any sort of shock or doubt that that might bring by trying to create those situations as much as you can in a practice or scrimmage setting."

An injury to Zach Hyman created a greater opportunity for Keefe to shuffle the deck, but it appears the winger won't be out too long. Hyman missed the last two days of team skates after taking a Jason Spezza shot off his leg in special teams work on Friday. On Sunday, though, he skated on his own before the scrimmage.

Keefe was asked about his level of concern regarding Hyman's status.

"I would say low at this point. You never quite know. We're going to see how this is ... I'm not too concerned."

Hyman had been skating with Nylander and Matthews prior to the injury.

On Monday, Matthews called his conditioning "not great" and lamented the fact he was kept off the ice for more than two weeks due to a positive COVID-19 test in the run-up to camp. So, how's he feeling one week in?

"Every day I've felt a bit better," Matthews said. "Things are progressing better and better every day, but obviously want to continue to take steps forward."

"He said he was feeling a bit sluggish [earlier in the week], but you never really notice it with him," said Barrie. "He is such a special player and the way he controls the puck, the head and the hands is the great equalizer and he has those going. I think he looks pretty good right now."

Is Matthews satisfied with his progress?

"Hmm, I don't know, I think it's kind of a tough question. The way I felt the last couple of days is a lot better but the timing, handling the puck [are a work in progress]. I think pace of play and things like that are starting to come back. Kind of figured that would take some time, but as far as being happy, I always like to be better."

On Saturday, Keefe noted that ​Matthews seemed to be holding back a bit with his shot perhaps because he doesn't want to hurt any of his teammates. Matthews agreed that he's still looking to find the range on his shot.

"I don't think I'd call it an issue, it's more like a thing," he said. “In a training-camp scenario sometimes you are looking for the perfect play. I think it's good kind of getting out of that habit and start shooting pucks more. Myself and JT and Mitch were talking about that on the bench about getting more pucks to the net and shooting. As far as myself, I'll always have that shoot-first mentality and obviously you don't want to hurt anybody, but I expect a lot out of myself and in certain situations I know I need to shoot the puck more. It's just getting my timing back and getting back into those game situations."

It’s a credit to Matthews that he continues to produce – three goals in the last five periods – despite not really unleashing his shot yet.

"There's a lot of other benefits that Auston is getting in terms of handling the puck and feeling his way through traffic and finding ways to create and make plays," Keefe said.

From @kristen_shilton: Matthews aiming to shoot more as Leafs camp ramps up.

Rasmus Sandin spent the first part of the pandemic in Sweden where relaxed regulations allowed facilities to remain open. So, Sandin was able to skate more than his teammates back home.

"My brother [Flyers prospect Linus Sandin] was at home as well so we could skate together so I felt ready."

Off-seasons are important for young players, but Sandin pointed out the four-month break was far from a traditional summer experience and he wasn't able to do as much development work.

"It was kind of tough," he said. "You didn't really know too much about whether the season was going to start or not or what was going to happen. It was tough, because you didn't know whether to go really hard in the gym or get stronger and heavier or if just you wanted to stay in game shape and be ready and fast."

Perhaps that's why Keefe feels the 20-year-old wasn't at his best early in camp.

“He's finding his way here," Keefe said. "Despite the fact that he was skating and all those things, for all of the European players when they came over here they had to quarantine and couldn't do much of anything. So, in that process you probably lose most of what you've gained. It's amazing how quickly some of that stuff will go away but he's finding his way back here. I find every day he's seems to be getting more and more comfortable and I thought today he looked really good in terms of how he was moving the puck and all those things. The more he has the puck and is playing with his head up, finding forwards and launching our attack is a pretty good indication that he’s coming around and today was the most I saw of that.”

Frederik Andersen has been in net for all 11 goals scored by Team Matthews over the last two days, but Keefe isn’t concerned about the confidence of his No. 1 goalie.

"You'd like to see it not go in as much," Keefe acknowledged. "On a day like today, Fred's an experienced and smart enough guy to know that there's a number of those that he's got no chance on. I actually thought what was really great was he stood tall and made what might have been the save of the game late so for him to stay in the game and stay focused, to be able to make such a save was a really good sign for us. I'm not too concerned about anything that is happening in these scrimmages. Whether it’s the goalie or any of our players, they’ve got enough mental toughness and intelligence to be able to shrug these things off and move forward with their preparation."

Monday is a full day off for the team.