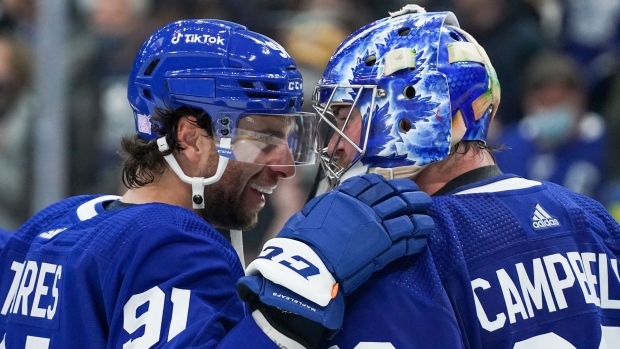 Jack Campbell declined to confirm reports Tuesday that talks have begun on a contract extension, but made it clear he hopes to stay with the Toronto Maple Leafs beyond this season.

“I truly love it here,” Campbell said. "It’s a special group and special city. There is nothing more I would love than to stay here.”

The 29-year-old improved to 4-2-1 as he made 26 saves for his first shutout this season in a 4-0 win over the Vegas Golden Knights on Tuesday. He has a .929 save percentage and a 1.99 goals-against average in eight games.

Campbell is currently playing out the last of a two-year, $3.3 million contract extension signed with the Los Angeles Kings prior to being traded to the Maple Leafs in Feb. 2020. He posted a 17-3-2 record last season with a .921 save percentage and a 2.14 GAA, while also starting all seven of the Maple Leafs playoff games against the Montreal Canadiens.

After signing defenceman Morgan Rielly to an eight-year, $60 million contract last week, the Maple Leafs have $75.28 million committed towards the projected $81.5 million salary cap for next season with just 15 players under contract, per CapFriendly. Campbell's backup, Petr Mrazek, is signed through the 2023-24 season at a cap hit of $3.8 million.