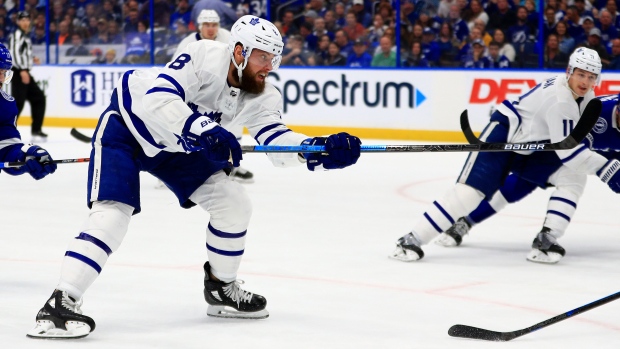 The 31-year-old left the victory in the third period after blocking a shot with his hand. He had recorded his sixth goal of the season before exiting.

The Maple Leafs recalled Calle Rosen in a corresponding move Wednesday. Rosen was acquired on Monday from the Colorado Avalanche for goaltender Michael Hutchinson.

Defenceman Jake Muzzin is expected to be out of the lineup for approximately four weeks after suffering a broken hand last night.

Defenceman Calle Rosen has been recalled from the @TorontoMarlies (AHL). pic.twitter.com/ViVIkseAK3

The injury is yet another to the blueline for the Maple Leafs, who already without Morgan Rielly and Cody Ceci due to lower-body injuries. Both Rielly and Ceci skated on Monday for the first time since their injuries, but neither is expected back in the immediate future.

"Such a key player for us, he's been playing great," captain John Tavares said of Muzzin on Tuesday. "No question it's a big loss, but at the same time we can't hang our heads and think, 'Why us?' As a group, collectively, we got to all continue to step up and continue to fill that void and play better."

Toronto currently holds the third and final playoff spot in the Atlantic Division with a two-point lead over the Florida Panthers, who have a game in hand. The Maple Leafs will visit the Panthers, who beat the Arizona Coyotes 2-1 on Tuesday, Thursday night.

"We really are going to have to embrace the next-man up (mentality)," defenceman Tyson Barrie said Tuesday. "We're in a spot where we can't let that effect the way we're playing. It will be a big test for us."

Muzzin has six goals and 23 points 53 games with the Maple Leafs this season while averaging 21:35 of ice time per game, "We really are going to have to embrace the next-man up (mentality) ... We're in a spot where we can't let that effect the way we're playing. It will be a big test for us." game. He missed a month of action earlier this year due to a broken foot.

The 30-year-old signed a four-year contract extension with the Leafs on Monday. He was scheduled to become a free agent in July and carries a $4 million cap hit this season, the last of a five-year deal signed with Los Angeles in 2014. The extension will make Muzzin the Maple Leafs' highest-paid defenceman next season, coming in ahead of Rielly, who carries a $5 million cap hit through 2021-22.