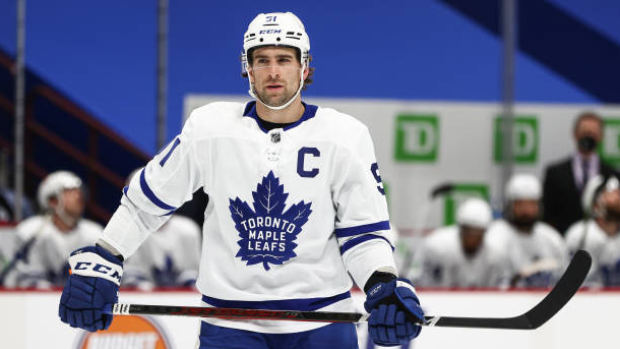 The Toronto Maple Leafs comeback bid against the Ottawa Senators was halted Thursday when captain John Tavares was called for hooking with 42 seconds remaining in a 3-2 loss.

Tavares was penalized after he appeared to lift the stick of Connor Brown as the Senators forward attempted to shoot the puck on Toronto's empty net from the neutral zone. The Maple Leafs had scored two third-period goals against the Senators to close their deficit to one but couldn't complete the comeback.

"Brutal. I mean I lifted the guy's stick," Tavares said when asked about the call. "At the end of the day, we put ourselves in that position in the first place, but unfortunate that got called when I just lifted his stick.

Head coach Sheldon Keefe also voiced his displeasure for the call, stating it's "early in the season for everybody."

"We've seen the memos on the crosschecks and the guys are well aware of that and they're adjusting to that, but I haven’t seen the memos on not being able to lift guys' sticks, that's new," Keefe said. "I don't think that's going to be the standard moving forward, but that's early in the season for everybody."

The loss dropped the Maple Leafs to 1-1 on the early season and came at the cost of losing goaltender Petr Mrazek to a groin injury in the second period.

Toronto will look to get revenge for Thursday's loss against the Senators on home ice Saturday night.