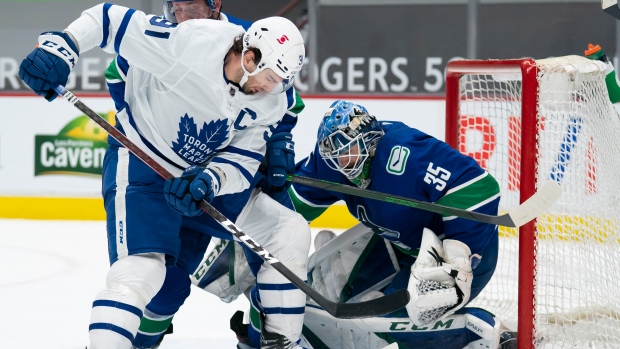 The Maple Leafs held a media availability in Vancouver on Saturday afternoon.

To end this road trip on a high note, the Leafs need to find a way to beat Thatcher Demko, who stopped 31 of 32​ shots on Thursday night.

"He made a couple big saves for them," said Auston Matthews, who fired five shots on net and hit a post late. "We had some quality opportunities there, especially at the end. He came up big. So, sometimes you just have to tip your hat."

"He looked really solid," said defenceman Justin Holl. "Not a lot of second-chance opportunities. Really good positionally. We need to get as many pucks on him as possible and try to create chaos in front of the net and get a couple greasy ones."

Demko is looking more and more like the goalie who pushed the Canucks to Game 7 against the Vegas Golden Knights in the Western Conference semifinals.

"You have to have a little extra poise and make good on your shots," said coach Sheldon Keefe. "Also, [don't] let him feel too good and give him any freebies or wasted shots. We want to make sure when we do shoot the puck we have good presence there and we're shooting from good places."

Demko is 6-6-1 with a .924 save percentage since dropping his first three starts of the season. The American posted a 27-save shutout over the Jets earlier this week.

"We have to find a way to get some more pucks in and around the net and some seconds and thirds and rebounds," said captain John Tavares. "They do a good job around their net. They defend hard so we're going to have to find ways to up our game there."

Matthews is due for a big night after being held off the scoresheet in both games since returning from a wrist injury. He knows Demko well and beat his former World Junior teammate twice in a game earlier this season.

"He's big [6-foot-4], takes up a lot of space and ever since the bubble and the playoffs last year he's really come into his own," said Matthews. "I've been fortunate to get to know him a bit and he's an awesome guy and really great person."

Matthews has now gone four consecutive games played without a goal, which is his longest drought since a five-game dry spell from Nov. 27 to Dec. 4, 2019. He has 19 shots on net in those four games.

Zach Hyman joined the top line with Matthews and Mitch Marner in the third period on Thursday replacing 41-year-old Joe Thornton, who saw only one shift in the final frame.

"We were chasing the game and wanted to shorten the bench and wanted to get Hyman back with Matthews and Mitch," Keefe explained. "I didn't really intend it to go the way that it did in terms of really shortening it down to three [lines], but it was just the way it worked. Once we got down two, I thought we really had to press for a bit to try to get at least one and I just kind of lost him there. That's really it. Things will be back to the way we started."

Thornton played just 11 minutes and 57 seconds, which was his lowest ice time in a game as a Leaf.

Intelligent Hockey: Auston Matthews has gone four straight games without a goal. Will that drought come to an end against the Canucks on Saturday night? @IntelligHockey reveals his best bets for Saturday's action. #LeafsForever https://t.co/flI2cTeBp5 pic.twitter.com/VqxhVbA2Ov

After playing three games in four nights and four in six, the Leafs finally got a chance to catch their breath.

"We're hoping after a day off yesterday we'll have better legs," Keefe said. "If we have better legs we think our execution will be better in all areas, especially defensively. We'll look to close on things a little bit quicker, try and get the puck back quicker. We want to generate more opportunities. We thought we had ample opportunities to score more than we did the other night, but still not enough."

The Canucks held a full practice on Friday. Neither team skated this morning due to the afternoon start time.

"We expect more of the same from Vancouver in terms of how they play and how they compete and how they skate and how quickly they come at us so we have to find a way to execute through that,"​ Keefe said.

Michael Hutchinson allowed three goals on 28 shots in Thursday's loss. It was the first time since Feb. 15, a 6-5 overtime loss to the Senators, that the Leafs' starting goalie posted a sub .900 save percentage.

The second-period goal by Jake Virtanen was a bad-angle shot. It ended up being the game winner.

"The guy is skating down the boards and they have some guys coming to the net," Hutchinson recalled. "I flattened out a bit expecting the play for him to be to throw it in front or try and bank it off me low for a pad pass with their guys driving. As I was going down into the post, I saw his wrists open up and knew he was coming high. From there I just slipped off the post a little bit. It was just a little bit of a mess for me. It's definitely one I'd like to have back. It was an unfortunate goal at an unfortunate time of the game."

Toronto will have No. 1 goalie Frederik Andersen back between the pipes tonight. He was solid on Wednesday night in his return from a lower-body injury.

"Fredzilla was a beast," Matthews declared after the 26-save effort against Connor McDavid and company.

Jack Campbell skated again today, but still isn't ready to dress in a game. He re-aggravated a leg injury last Saturday while posting a shutout against the Oilers.

"I don't think he's frustrated," Keefe said. "I don't think Jack ever gets frustrated. He's a pretty positive guy. The fact he continues to be able to get on the ice every day is positive and he's making progress ... He's kind of taking it a day at a time."

Campbell initially sustained the injury on Jan. 24 in Calgary.