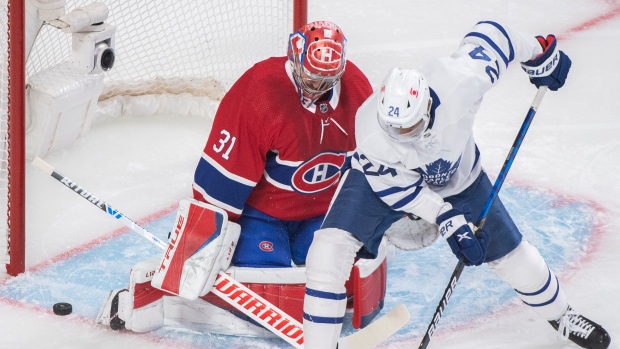 TSN Toronto Reporter Mark Masters reports on the Maple Leafs, who held a media availability on Sunday ahead of Monday's Game 7 against the Canadiens.

Maybe this was meant to be. Perhaps the Toronto Maple Leafs need to go to the limit again to finally, once and for all, exorcise their playoff demons.

"As much as it sucks how we got here and what we've been through the last couple games ... I really feel, frankly, we're right where we're supposed to be," said coach Sheldon Keefe. "We're facing a Game 7 situation, a very difficult task at a time when the other team has momentum, at a time when you start to doubt and question yourself and people on the outside doubt and question you. You got an opportunity here in a Game 7 to embrace that and meet that head on and push through it."

The last four seasons, the Leafs failed to push through at key moments in the opening playoff round.

"We've been on the other end of the stick in these do-or-die games," noted centre Auston Matthews. "We would like to rewrite that script and we have a great opportunity come Monday."

"Obviously, nerves come into play," said defenceman Morgan Rielly, the longest-serving Leaf. "It's a big challenge for us, but having that experience of playing in these games helps."

The difference this year is the Leafs are the clear favourites in the series having finished 18 points clear of the Montreal Canadiens in the regular season. And they showed that superiority by building a three games to one lead. And yet they have ended up at the same spot as usual. Just like against the Boston Bruins in 2018 and 2019 and against the Columbus Blue Jackets last year, the Leafs season comes down to a win-or-go-home game.

"There's a lot on the line," said Rielly. "It's a big opportunity for this group to move forward and win and put that behind us. There's a lot at stake."

Rielly, Matthews, Mitch Marner, William Nylander and Zach Hyman are the five guys expected to play on Monday who were also part of the four previous playoff eliminations.

"It's just staying in the moment," said Foligno. "That is the best thing you can advise anybody. In a Game 7 you rise to the occasion because you're in the moment. You look around that room and the guys around our team that have the abilities that they have, I feel real confident with their mindset being that way."

Toronto has come painfully close to advancing in the past. And now they’ve been one goal away twice in this series.

"Last night, you feel like s— because of what you've been through and you're right there in overtime and you could end the series and you don't get it done," said Keefe. "But you wake up this morning and you think about the opportunity for our team. Everything they've been through, especially our core guys, to have this opportunity on this stage, to have this be the moment to push through it, it’s an incredible opportunity."

One reason why the Leafs are in this position is the top line's lack of production. Matthews has one goal on 32 shots. Marner has yet to score while firing 17 shots on Carey Price. Zach Hyman has one goal on 19 shots.

"Despite Montreal doing a really good job against them, they have found ways to generate some really good high-danger chances in every game," said Keefe.

Matthews fired seven shots on net while logging more than 30 minutes of ice time on Saturday. But the Leafs held only a slight edge in shot attempts in the five-on-five minutes that Matthews played. So, he wasn't the dominant Rocket Richard Trophy winner we saw in the regular season.

"We've done a lot of really good things," the 23-year-old insisted, "whether it was gaining momentum for our team when we've lost it or just creating chances and creating havoc. Obviously, we'd like to see those pucks go in, but we're just going to keep shooting and keep fighting and keep working to help the team win."

"We need to be better in these situations," the 24-year-old winger said. "We're playing too much in our zone. When we got in their zone, we were doing a decent job of moving the puck around and getting to the net, but too much energy was wasted in our own zone. We've got to make sure we're better than that."

Marner appears to be pressing. He uncharacteristically flipped the puck over the glass leading to a delay-of-game penalty on Saturday. He termed the play "dumb."

Marner sends it over the glass pic.twitter.com/q0GUMHc3gj

"Those guys have got to remain confident and not get distracted," said Keefe. "There's lots of moments where those guys have had chances to make the difference so they have to trust that those chances will be there again and got to make good on them. And, throughout all that, they have to continue to play hard and play structured and play smart and all those kinds of things. But, certainly, we need everybody to be at their best tomorrow and our best players, in particular."

"We're going to breakthrough here," vowed Hyman. "I know those guys put a lot of pressure on themselves and it's going to be a big night for them."

With Nylander leading the team in goals (four) and points (seven) in the series, Keefe has tried to find more ice time for the smooth-skating Swede. That included more minutes alongside Matthews and Marner in Game 6.

"It’s been OK," Keefe said of the trio. "We used it more last night than we have and I don't think it was Will’s strongest game of the series so I don’t know if it’s a true indication of what they could be capable of. So, it’s something we got to look at."

Per NaturalStatTrick.com, the Leafs had a 9-3 edge in shot attempts in the five minutes and 37 seconds Nylander, Matthews and Marner played together at even strength.

Nylander was held off the scoresheet on Saturday for the first time in the series although he did help set up the Jason Spezza goal by being strong on the forecheck.

"Will had been playing very well in the [previous] role and how I was utilizing him," Keefe noted, "and the last couple of games I got away from that in an effort to get him a little bit more and it really hasn't gone as well for him so I have to manage that a little bit and make sure I'm not getting him out of the rhythm that he was in."

After missing three games with a lower-body injury, Foligno returned to the second-line centre role on Saturday night starting between Alex Galchenyuk and Nylander. But Keefe is considering reuniting Nylander and Galchenyuk with Alex Kerfoot in Game 7.

"I wanted to get Nick back in the spot we had him in before he left the lineup and get a sense of where he was at," Keefe explained.  "Kerfoot's played well for us no matter where we've had him. So, that is something we're looking at. It's a combination of Nick's health and how it effects the rest of the lineup. That's one of the things on my list today to sort through."

There wasn't much of an update on defenceman Jake Muzzin, who left Saturday's game with a lower-body injury.

"He's getting further tests this afternoon so we don't have word or update on his status yet," Keefe said. "He hasn't been ruled out [of Game 7] at this point."

Here is what took Muzzin out. Looks like he pulled something pic.twitter.com/hWWYh1CFCZ

"That’s inexcusable, obviously," said Hyman. "It's something that we've discussed as a team. So, that's on us and we'll be ready to go for Game 7. We can't change anything in Game 5 and Game 6, but it's something we have to grow from and learn from. I think the guys are ready and it's a huge opportunity. Montreal-Toronto, Game 7, we'll be ready."

Keefe is taking some of the blame for the early-game angst. The coaching staff spent time on Sunday discussing the best ways to get the group going in Game 7.

"There's a responsibility for the players to be ready at the drop of the puck but, as the head coach, I take a lot of responsibility myself to have the group ready and that hasn't been the case," he said. "Montreal is a team that's going to come with lots of energy and speed and pressure early. In the games where we've had success as a team, we've managed that early on and then pulled away as the game has gone along. They've been able to establish their game for a longer period of time here in the last couple and we have to change that."

Montreal has outscored Toronto 4-1 in the first period in the series while the Leafs hold a 9-2 edge in the second period and 7-3 in the third period.

The Leafs are scheduled to hold a morning skate at Scotiabank Arena on Monday.