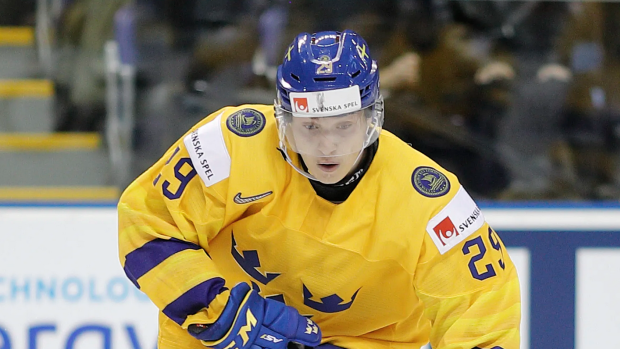 Toronto Maple Leafs prospect Pontus Holmberg was among the players named to Team Sweden for the 2022 Winter Olympics on Friday.

A sixth-round pick of the Maple Leafs in 2018, the 22-year-old winger is enjoying a breakout season in Sweden after signing an entry-level contract last summer. Holmberg has a career-high 10 goals and 28 points in just 33 games this season with Vaxjo HC.

Sweden is looking to return to the podium in Beijing after being upset by Germany in the quarter-finals at Pyeongchang 2018. Their 2022 roster also includes former NHL players Marcus Kruger, Lucas Wallmark, Jacob de la Rose and Joakim Nordstrom.

Kruger is looking to add Olympic gold to a resume that already includes two Stanley Cup championships from his time with the Chicago Blackhawks. The 31-year-old has spent the past three seasons in Switzerland with Zurich SC, posting eight goals and 27 points in 39 points this season.

Wallmark moved the KHL last summer after five seasons with the Carolina Hurricanes, Florida Panthers and Blackhawks. The 26-year-old centre has eight goals and 19 points in 31 games with CSKA Moscow after playing in just 20 NHL games last season.

Sweden won gold at the 2006 Olympics in Turin, finished off the podium at Vancouver 2010 and won silver at Sochi 2014.