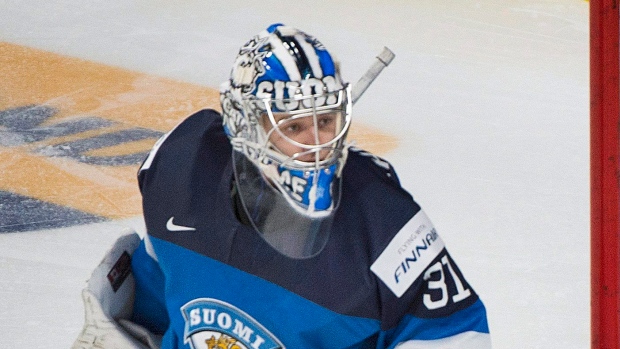 TORONTO — The Maple Leafs have moved on already from rookie defenceman Mikko Lehtonen, sending the blueliner to Columbus on Friday in exchange for goaltender Veini Vehvilainen.

Lehtonen was on his way to becoming the KHL’s Defenceman of the Year when Toronto originally signed him to a one-year, entry-level contract in May 2020. Lehtonen has appeared in only nine games since arriving with the Leafs at the start of this regular season, tallying three assists.

Head coach Sheldon Keefe alluded on Thursday to the fact that Lehtonen had already been phased out of Toronto’s plans in some ways, simply because of how well the current lineup was gelling.

“I think we've reached a different phase of the season here,” Keefe explained. “I think we gave lots of opportunity to different people early in the season, Mikko being one, at times when maybe we really didn't have a reason to change the lineup, other than to give more opportunity for Mikko and others. We're at a point here now where the season has definitely got lots of momentum and you gotta give yourself the best opportunity to win each day.”

Keefe conceded that Lehtonen had displayed an excellent work ethic in his tenure with the Leafs, praising the blueliner for being “extremely committed, extremely focused.” At the same time, Keefe found that, “for the last little while, we just haven't seen a reason to make the change [and put him in].”

Toronto had high hopes for Lehtonen at the outset though. When training camp started, Keefe had Lehtonen with Zach Bogosian on the Leafs’ third pairing, and told reporters that, “We have [those] two guys coming in here that we really like, and we want and expect to make our defence better. So we'll give them that opportunity to pair together.”

It wasn’t long before Travis Dermott had jumped over Lehtonen to play with Bogosian, and from there the 27-year-old struggled to regain any traction.

Keefe repeatedly praised Lehtonen’s ability to quarterback one of Toronto’s power-play units when he was in the lineup, but danced around the fact his 5-on-5 play wasn’t where it needed to be.

Part of what held Lehtonen back was the lack of an exhibition schedule in the NHL’s pandemic-shortened season, giving the newcomer little time to get his game up to speed on the smaller ice surface.

When he left the KHL, Lehtonen had just completed his most productive year ever, scoring 17 goals and 49 points in 60 games for Jokerit Helsinki. Toronto wanted to see that same ability manifest in the NHL.

“We're looking for him to show that his game can translate seamlessly to this level,” Keefe said of Lehtonen on Jan. 18. “That’s the greatest challenge for players like him is the nature of training camp and no exhibition season, you can't really get the kinks out, you can't make the adjustments, you can't make the mistakes in those games that don't matter and then have it cleaned up by the time you're playing for real.”

Now, Lehtonen can look ahead to a fresh start with the Blue Jackets, while Toronto gets a goaltending prospect in Vehvilainen.

The 24-year-old was selected in the sixth round, 173rd overall, by Columbus in the 2018 NHL Draft, and just made his NHL debut on March 4 in relief of Blue Jackets' starter Joonas Korpisalo. Vehvilainen had good success with the Finnish Elite League’s Karpat prior to being taken by the Blue Jackets, posting a 45-13-13 record from 2017-19 with a .925 save percentage.

He has represented Finland on multiple occasions internationally, winning a gold medal at the 2019 World Championships and a gold with the 2016 World Junior team.

Vehvilainen was also one of Finland’s top players at the 2017 World Juniors, producing a 3-2-0 record with a 1.51 goals-against average.