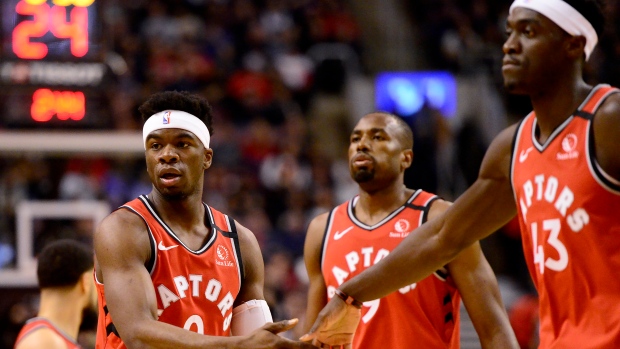 The Toronto Raptors are aiming for the top seed in the East. , The Canadian Press

TORONTO – For the first time since the NBA closed its doors and the growing threat of the coronavirus forced teams to disperse and isolate almost four months ago, the Toronto Raptors are together again – well, sort of.

They’re staying at the same hotel, but are situated on different floors. They’re working out in the same gym, but have to stagger their court time and shoot on neighbouring hoops. They eat in the same room, but sit on opposite ends of giant tables.

They can play video games but can’t hang out in the same room, go golfing without sharing a cart, and play tennis or ping-pong but can’t compete in pairs.

Last week, 45 members of the Raptors organization – including all 17 players – arrived in Fort Myers, Fla., to reconvene and begin preparation for next month’s resumption of the NBA season at Walt Disney World Resort. However, until they travel to Orlando next week and are permitted to start practicing and working out in groups, they’re expected to stay six feet away from each other at all times.

They’re back together, but you can see why it might not feel that way.

"It’s certainly been strange, and the first few days here felt strange," said head coach Nick Nurse on Tuesday via teleconference. "But, like a lot of things, you kind of get into a rhythm and get used to it a little bit and make the most of it."

Once they’re able to share the court again – sometime between July 9-11 – they’re hoping to pick up where they left off.

The last we saw of the defending champs they were putting the finishing touches on an impressive West Coast road trip with a shorthanded win in Utah on March 9. It was the kind of game that had come to define the remarkable season they were having.

Marc Gasol, who had been dealing with a lingering hamstring injury, returned in Sacramento the night before but was sitting out for rest in the second game of a back-to-back. Fred VanVleet was on the mend but missed his sixth straight contest with a shoulder ailment. Norman Powell, who was playing the best basketball of his career, turned his ankle and had to leave the game two minutes in.

Even without three rotation players, they managed to pull out an unlikely road win over the fourth-place Jazz, improving their record to 46-18 on the campaign. They were on pace for a franchise record-tying 59 wins, despite losing their best player over the summer and being decimated by injuries throughout the season.

There are plenty of reasons to feel good about their chances heading into the restart – their chemistry and continuity, experience and basketball IQ, adaptability and championship pedigree, among other things. And yes, the time off should have given their older and banged up players an opportunity to heal and get some rest.

But four months is a long time to be away from the game, and from each other. It’s basically the duration of a standard off-season. Is it reasonable to expect the momentum they had built to simply carry over?

"It’s going to be like going into a new season," said Nurse. "We went into this last season obviously missing a couple of really key pieces to our team [in Kawhi Leonard and Danny Green], so you were kind of selling an opportunity to a few guys… Fortunately Pascal [Siakam] took a jump, Fred [VanVleet], Norm [Powell], Serge [Ibaka] were playing amazing, OG [Anunoby] had been fabulous, so that opportunity, there’s a lot of guys that [took] it."

"I expect to kind of come back into this and see what we are going to look like, but we have a little cheat sheet to know there is a place we’ve been with this group. So, I think if it isn’t all holding hands and skipping rope at the beginning we just have to stick with it and see if we can get back to that level. I think there’s another level this group can go."

Like the other 21 teams participating in the restart, Raptors players will need to get their rhythm and conditioning back. That will take some time and can’t really be done in an individual workout format. Still, Nurse is encouraged by what he’s seen from his club this past week, from a mental standpoint more than anything else. He’s been pleasantly surprised with their focus and frame of mind after such a long and emotionally exhausting layoff. They haven’t lost the fire that helped them exceed all expectations a few months ago.

"I think we have a team that’s going to take it seriously and we’re all excited to get back to playing, whatever that looks like," VanVleet said on Monday. "I know we’ve got a lot of hungry, driven guys that want to win no matter what it is. It could be ping-pong or [video games] or whatever. Guys want to win around here, so I’m looking forward to it."

"We feel good," said Powell. "Obviously we’re a little bit rusty and haven’t been [playing] high-quality basketball for awhile, but everybody has been doing what they can, and everybody looks good, feels good, they are confident, and ready to get back into the full swing of things."

Last week, the NBA released the regular season schedule and Toronto was given one of the toughest eight-game slates.

The Raptors will resume their season on Aug. 1 when they face LeBron James, Anthony Davis and the Western Conference-leading Los Angeles Lakers. They’ll take on the rival Boston Celtics – who enter play three games behind Toronto for the second seed in the East – on Aug. 7. Their final three contests come against the first-place Milwaukee Bucks, the Philadelphia 76ers and the Denver Nuggets. Only two of their eight opponents have sub-.500 records.

They’ll be tested right out of the gate, but – true to character – they’re embracing the opportunity to prove themselves again. Nurse thinks it could be good for them to see some of those elite teams again and that the high degree of difficulty might help prepare them for the playoffs.

"We didn’t really get the best luck of the draw in comparison to other teams – we got a tough schedule – so there’s gonna be some time where we have to ease into things and find our flow," VanVleet said. "It’s gonna be up and down, I’m sure, but the biggest thing is just start to find our rhythm, hopefully, and get out of those eight games unscathed health-wise and then we’ll gear up for whatever series we have to gear up for. We’re gonna have to beat great teams no matter what the situation is, there’s no cupcakes in this thing, so it’s gonna be tough for anybody. But I like our chances."

Even if it’s unrealistic to expect them to pick up right where they left off, the Raptors are confident that they have the blueprint to re-establish the momentum they lost once the season was put on hold.

"Everybody I’ve talked to since I’ve been here is just looking forward to getting to Orlando and practicing and gearing up to try and win another [championship]," said VanVleet. "I think we have a really, really good chance and we’re going to be a tough team to beat four times, for anybody."