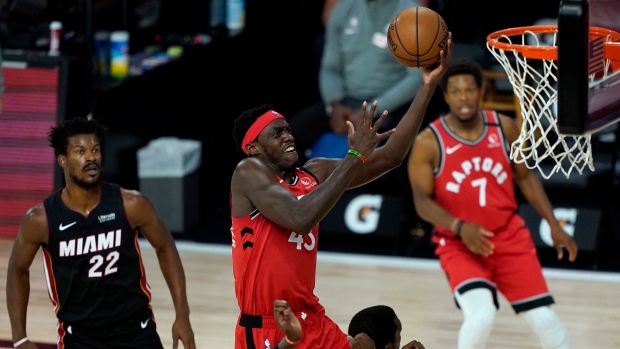 TORONTO – From the moment they arrived in Orlando, the Toronto Raptors have been the talk of the NBA bubble – for reasons related to and outside of basketball.

They made their entrance in a pair of busses that featured “Black Lives Matter” written along the sides, they’re the only organization that brought two senior executives – team president Masai Ujiri and general manager Bobby Webster – to the Disney campus, and they’ve picked up where they left off on the court with a couple of impressive wins over really good opponents.

All the while, they’re turning some notable heads around the league.

“[They’re] a great team, no ifs, ands or buts,” LeBron James said Saturday night, moments after the Raptors defeated his Lakers, 107-92, in their season re-opener. “Well coached. Championship DNA. The media may not give them as much credit because Kawhi [Leonard] is gone, but players know what type of team they are.”

“We have deep respect for their organization,” said Miami Heat coach Erik Spoelstra, the longest tenured head coach in the Eastern Conference, ahead of Monday afternoon’s game – a 107-103 win for Toronto. “They have an identity, a brand of basketball. They've acquired players that fit their style and they're extremely well coached and competitive. In many ways we look at them and it's just respect.”

The praise they’re getting isn’t undeserved of course, but it does feel a bit strange. After years of fretting over perceived slights and feeling overlooked by its neighbours south of the border, Canada’s only NBA team – and its fan base – is more accustomed to being disrespected or ignored than receiving pats on the back.

Even after winning the championship, they’ve happily settled back into a familiar role as plucky underdogs.

“I don’t think anybody’s going to pay much attention, they never seem to, but it’s OK,” head coach Nick Nurse joked after his team knocked off the Western Conference-leading Lakers on U.S. national television.

Just to make sure Raptors fans weren’t getting too comfortable as darlings of the league, the National Basketball Coaches Association announced the co-winners of their annual Coach of the Year award on Monday – Milwaukee’s Mike Budenholzer and Oklahoma City’s Billy Donovan. Nurse finished one vote shy of forcing a three-way tie, according to ESPN’s Adrian Wojnarowski.

Now that’s more like it. It was a reminder of simpler times – a time when rookie-sophomore game snubs and SI.com player rankings were worth getting riled up over. Remember when those things seemed important?

To be clear, this is not the NBA’s official Coach of the Year award, which has already been voted on by the media and will be announced during the playoffs, and which Nurse will very likely win. This is an honour for coaches, by coaches. Nurse and his 29 peers voted, and – as many folks around the association were quick to point out after Wojnarowski reported the news an hour or so before the Raptors tipped off against the Heat – they got it wrong.

“Those guys obviously did a great job,” said Nurse, who hadn’t seen the report until he was made aware of it during his pre-game media session. “You can't argue with the Bucks' record and how great OKC did after everybody had lower expectations for them. So, those guys are very deserving.”

Without taking anything away from those guys, as well as a few other worthy candidates, there’s a reason why Nurse is considered to be a strong front-runner for the award – the actual award.

After losing a couple starters from their championship club last summer, including the player most responsible for delivering Toronto its first title, the Raptors have exceeded even the most optimistic pre-season expectations. They’ve overcome significant injuries to all but one of their rotation players and, at 48-18 – the second-best record in the East and third-best in the NBA – they have a better winning percentage than they did through 66 games a year ago.

Regardless of who’s in or out of the lineup on any given night, Nurse’s team is almost always prepared and ready to compete. His laid-back demeanour has jived with Toronto’s players – many of who are enjoying career years – and his willingness to adapt and adjust on the fly has kept opponents on their toes all season.

That is what’s set the Raptors apart all season, and it’s carried over into the restart. Without Leonard, they can no longer be sure that they’ll have the best player on the court every night, but it hasn’t mattered. They’re confident they’ll be better prepared and play harder than the other team. More often than not, they’ve been right.

So far, they’re 2-0 in the bubble and have held the Lakers and Heat – the NBA’s eighth and sixth ranked offensive teams respectively – to an average of 97.5 points on 39 per cent shooting. However, it’s their attention to detail and the way they tailor their game planning to each individual opponent that has really stood out.

After neutralizing James (20 points) and Anthony Davis (14 points) on Saturday, the Raptors held Miami’s all-star duo of Jimmy Butler and Bam Adebayo to 16 and 10 points, respectively. Duncan Robinson, who’s third in the league in three-pointers made, only hit one of four attempts from beyond the arc after having at least one Toronto defender glued to him all afternoon.

“I think we have one of the better coaching staffs in the league, starting with Nick and going down,” said Fred VanVleet, who scored a career-best 36 points and made the game-sealing steal in the win over Miami. “Those guys, they work relentlessly on giving us the best look and then we’ve got a veteran team that’s locked into the game plan and stay locked in to switch. Whether it’s possession to possession, quarter to quarter, or game to game, we’re switching schemes, we’re doing different things and just not giving the same looks over and over again, keeping them guessing.”

So, how is it possible that Nurse wasn’t recognized by those who should appreciate how adept he is at his craft more than anybody else?

Remember when Ujiri finished fourth in voting for Executive of the Year – an award that’s determined by the league’s execs themselves – last season, despite acquiring Leonard, Danny Green and Marc Gasol, and building Toronto’s championship roster?

Perhaps you can’t expect people to be objective when voting for their peers, especially when there are politics and some big egos involved. Many of those execs have been fleeced by Ujiri, same as many of these coaches have been outfoxed by Nurse.

Maybe there’s some jealousy at play, which is believed to be a reason why Celtics head coach Brad Stevens generally doesn’t fare well in these coaches’ votes either. Like Stevens, Nurse – a young head coach in the NBA – has developed a reputation for being a great innovator and outside-the-box thinker. Most coaches value seniority and are traditional and risk-adverse by nature.

Regardless of how you explain the vote and whether or not you believe Nurse got robbed, you can bet he’s not losing sleep over it and neither should you. While some of the slights and snubs remain, times have changed and the Raptors have bigger things to worry about it.