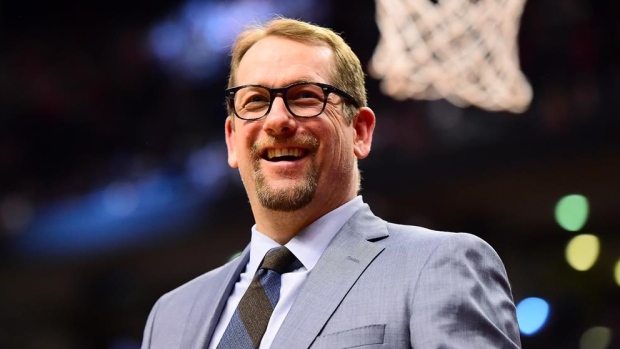 When the NBA season hit the pause button due to the outbreak of the novel coronavirus (COVID-19), the defending champion Toronto Raptors found themselves in a position that many around the league weren't expecting for a team now missing NBA Finals MVP Kawhi Leonard.

Despite having Leonard depart for the Los Angeles Clippers, the Raptors sat at 46-18 through 64 games, with the league's third-best mark, and atop the Atlantic Division.

Head coach Nick Nurse credits the team's perseverance without their best player to his maturing core and taking advantage of the opportunities availed to them.

"Everybody's kinda taken a step forward and I think a lot of that has come about just because of opportunity," Nurse told TSN's Kate Beirness. "I think the first two guys I saw the next day after Kawhi said he was going to the Clippers were Fred [VanVleet] and Pascal [Siakam] and I said, 'Hey, about 30 shots a game just opened up' and they both...said 'We're ready.' I think the spreading around of those shots and the improvement of Pascal and Norman [Powell], who looks so great this year, and Freddie. Those guys came back to camp as totally different guys this year and I actually like watching this team play from an offensive standpoint this year. We seem to have more options and more guys that can do it and were not kinda just trying to throw it to one guy to initiate so much."

While Nurse says that right now the team is focused on winning a second consecutive title when play resumes, he acknowledges that the outright cancellation of the remainder of the season remains a realistic scenario for which the team must also prepare. Should that happen, Nurse says, then it's on to the next one for the Raptors.

"I think you're gonna have to get over that, if that happens to be the thing," Nurse said. "I always say you've gotta kinda get over it and move on to the next thing that's presented in front of you and that will be whatever it is. I don't think any of us knows what's going to be presented to us, but...if this season doesn't resume and we, hopefully, get to start fresh next season, then that's where we're at. Let's attack it with the mentality of where our organization finds itself right now and we're the champions, man. So let's attack it as such."