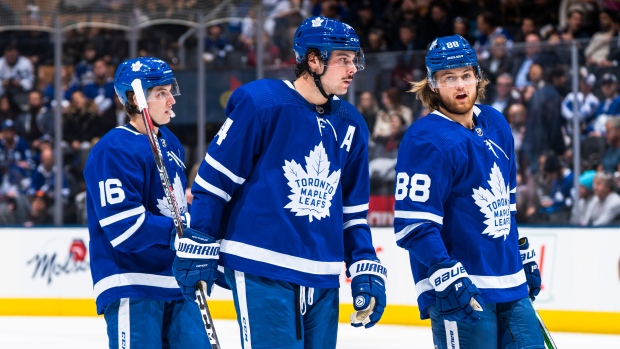 In the pantheon of fears in sports, being the target of a first-round upset is near the top of the list. There’s little worse than being sent home early and unexpectedly, and some organizations can live this nightmare for years.

Hockey is a low-scoring, volatile sport susceptible to upsets. It’s part of what makes it so captivating. Yet we know talent does prevail long-term – look no further than what the Tampa Bay Lightning have done in recent years, or a handful of other brief dynasties predating them.

As we head into the 2021-22 Stanley Cup Playoffs, a question arises: Are there statistical indicators of a team’s likelihood of being upset against an inferior opponent, and if so, what are those measurements?

To analyze this, I started with the trailing 10 years of first-round playoff performances. Teams that advanced as the stronger seed from Round 1 were differentiated from teams that were upset in the opening round. I focused on the usual key performance indicators for the time being – goals and expected goals (shots adjusted for quality), stop rates and save percentages, with those numbers split across the varying game states. 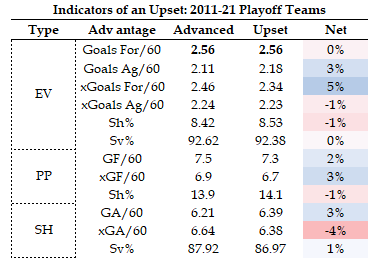 There’s very little daylight in some of these measures, in large part because we are talking about playoff-calibre teams that aren’t separated by much in terms of talent. But there are a handful of notable observations from the data set.

- You cannot win with poor goaltending, but that is something that is usually decided in the regular season. That is to say: teams with poor goaltending struggle to qualify for the playoffs. Most playoff qualifiers have average or above-average goaltending, so you see little differentiation between the teams advancing and being upset. Advancing teams only had marginally better stop rates at even strength and on the penalty kill during the regular season.

- Interestingly, the penalty kill is one area where great goaltenders differentiate themselves. Advancing teams gave up more expected goals on penalty kills than teams that were upset, but great goaltending kept real goals at bay.

- The strongest differentiator is expected goals for at even strength. Since expected goals are capturing shot volume (and by extension, puck control time) and adjust for the lethality of those shots, it is an excellent barometer of which team is driving play. Moreover, it’s the type of valuable statistic that sustains itself over time.

Let’s bring this back to the upcoming postseason. Entering play Monday, 11 teams still have a shot at being the higher seed in their first-round matchup. If we use advancing team averages across all these measures as a baseline, we can assign a risk profile to each team. Teams that are beating most of the statistical baselines, we know from history, will generally advance; teams that aren’t are at higher risk of an upset. 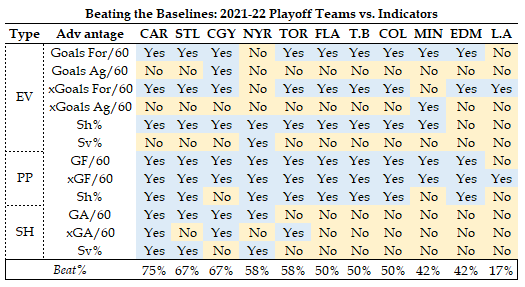 Most of the offensive numbers are squeezed to the upside this year, so naturally most of the playoff-bound teams are beating offensive expectations. But we can still glean quite a bit from this data.

For example: the risk profiles are very kind to the Carolina Hurricanes, St. Louis Blues, and Calgary Flames because they tend to be well-balanced teams that dominate the puck. Moreover, they don’t have an obvious area of weakness that’s manifested over the course of the regular season.

Contrast that to a team like the Colorado Avalanche, who have been extraordinarily strong for years now and may be the most talented team in the league. Why do they carry a higher risk profile? The simple answer is the penalty kill. If you can get Colorado to spend some time in the box (easier said than done), they are not the same team. And the gap is significant: on a per-minute basis, Colorado was 34 per cent less effective suppressing goals than conference-rival Calgary, and 72 per cent less effective than the Hurricanes.

Lastly, the Toronto Maple Leafs, everyone’s favourite “first-round upset” team. I wrote earlier this year I thought this season was different – that Toronto was not showing the same risk profile they had in years past, be it from a weak blueline or shaky goaltending, and that they would be a much more game club come playoff time. A lot of that has to do with the offensive dominance we have seen from this club all season long.

We won’t know if the Maple Leafs will earn home-ice advantage for a few more days, and we do know they are likely entering a harrowing first-round series with Tampa Bay. But if you trust Jack Campbell in net, the Maple Leafs are as well-situated as any Eastern Conference team to advance, save Carolina.