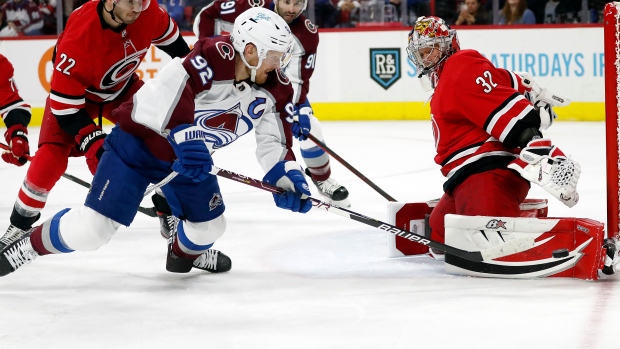 Over the last three seasons, the Colorado Avalanche (+178 goals) and Carolina Hurricanes (+131 goals) have distinguished themselves as the league’s preeminent franchises. They both lead their respective conferences in goal differential by a considerable margin and, once again, are favourites for the Stanley Cup.

They both play with relentless pace. They dominate the puck. They are as deep and skilled as any team you can find in the league. And yet, one data point differentiates them in an extraordinary way.

In what’s becoming an increasingly perplexing trend, the Colorado Avalanche and Carolina Hurricanes have realized extreme divergence in penalty behaviour. It’s particularly odd because the NHL hasn’t been shy about how they call penalties, and that’s to follow an extreme balancing strategy. Rather than call the rulebook as intended, the league prefers to ensure teams earn relatively similar amounts of power-play opportunities over the course of a game (and, by extension, a season). It’s why you see very few teams with outlier seasons; it’s also why you see teams that draw more penalties take more penalties (like the Montreal Canadiens), and teams that draw fewer penalties take fewer penalties (like the Toronto Maple Leafs).

Let’s bring this back to Colorado and Carolina. The chart below shows a three-year tally of penalties drawn and taken, all situations. I’m going to bring in a third team – the Arizona Coyotes, who have distinctly been out-possessed, out-shot, and out-scored over this same time period – for benchmarking purposes. Here’s what the data says: 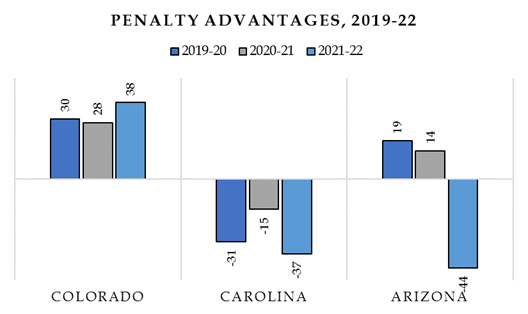 Let’s isolate in terms of penalty type. I mentioned earlier that, for many teams, penalties drawn and penalties taken move in parallel, but that relationship must be breaking down here. Let’s look at penalties drawn first for all three clubs: 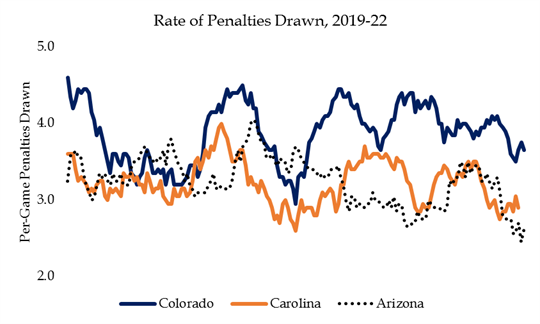 I think a lot of the story is here. Carolina has never – not one time over the past three seasons – drawn more penalties than Colorado. Not by fluke or happenstance. Meanwhile, Arizona has vacillated between the two: sometimes drawing penalties at aggressive rates, and sometimes not. What’s interesting here is we know that Carolina and Colorado dominate the puck in a way few other teams do, and that should lend itself well to drawing penalties. Arizona, meanwhile, has been the most out-shot team in the league and is perpetually playing off the puck. 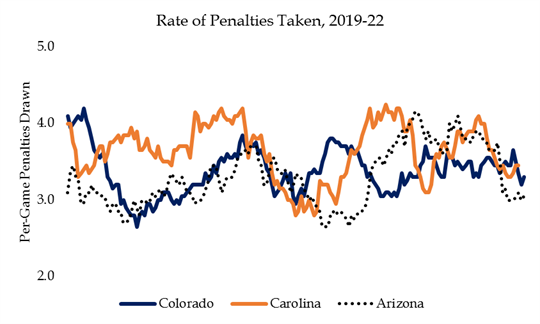 No team has spent more time killing penalties than the Hurricanes over this three-year interval, whereas the Avalanche and Coyotes are hovering right near league average. And so despite every effort by the NHL’s officiating teams to balance penalties, Carolina and Colorado move in opposite directions. 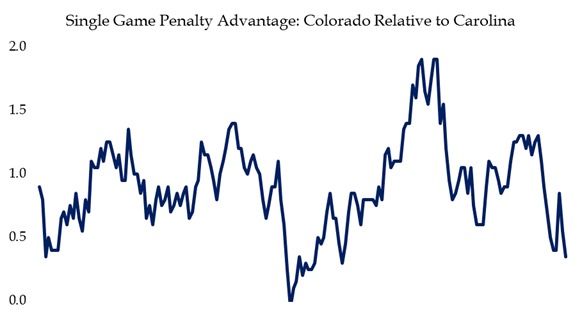 As a matter of curiosity, I wanted to see if there was something within the penalty call profile that would differentiate the two teams. What’s clear is that amongst the penalties routinely called by NHL officials (predominantly hooking, tripping, holds, and slashes), Colorado gets a very favourable whistle, and Carolina the opposite: 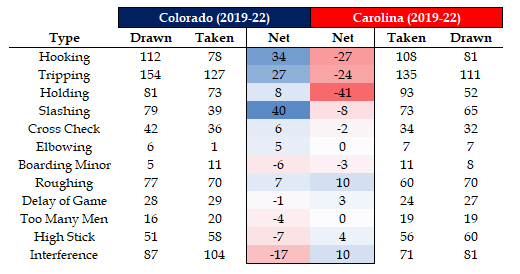 In most scenarios, I would be inclined to point out that variances – even extreme variances – are bound to happen across any measurement criteria, and that some teams are simply more disciplined than others.

To argue that, I would have to believe that skill and discipline could explain such a significant gulf. In a league where the distribution of penalties is extremely tight, I find that very hard to believe.