What do the Edmonton Oilers have in defenceman Darnell Nurse?

You would think this to be an answered question by now. Nurse, 26 and in his sixth professional season, has already established himself as a cornerstone of the Oilers’ blueline. But this season has been particularly noteworthy, with head coach Dave Tippett stepping up his usage in a significant way.

Through Tuesday’s games, Nurse was one of the most-utilized defenders in the National Hockey League. At even strength, his 21:14 of ice time per night trails just San Jose’s Brent Burns and Ottawa’s Thomas Chabot. Nurse is also seeing 1:42 in power-play time and about three minutes of short-handed time per game.

Across all situations, no one has played more minutes than Nurse, and that means a more than a three-minute jump from the veteran defenceman’s previous career highs.

Compare him to other heavily used North Division defenders for a point of reference: 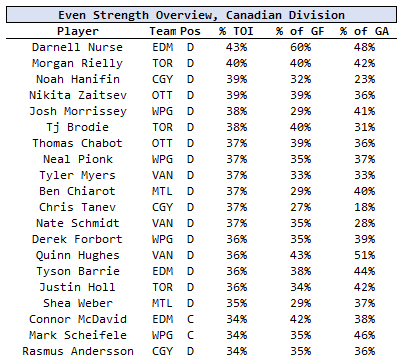 Tippett isn’t being particularly coy about what he’s doing with his lineup. The Oilers – despite efforts to build up their depth positions over the past couple of seasons – are still a top-heavy team, and their performance in the standings is highly correlated with how much they can squeeze from their stars on a nightly basis.

It’s why, among other things, teammates Connor McDavid and Leon Draisaitl once again lead the league in ice time at their respective position. Most nights mean a lot of minutes for Edmonton’s top-six forwards and top defensive pairing, and thus a lot of minutes where Nurse is playing behind one or both of the star forwards.

Not surprisingly, there is a change in Nurse’s underlying performance numbers depending on who he’s playing with. When he’s behind both of McDavid and Draisaitl, Edmonton looks like a supernova. When Nurse is paired up with just one of the two stars – as is usually the case – the numbers are still quite encouraging.

But the moment Nurse steps into minutes with the bottom six, everything goes by the wayside. The curious part is how big the deviation is.
If we partial out all of the minutes played together and apart between these three skaters, we can observe how that performance changes: 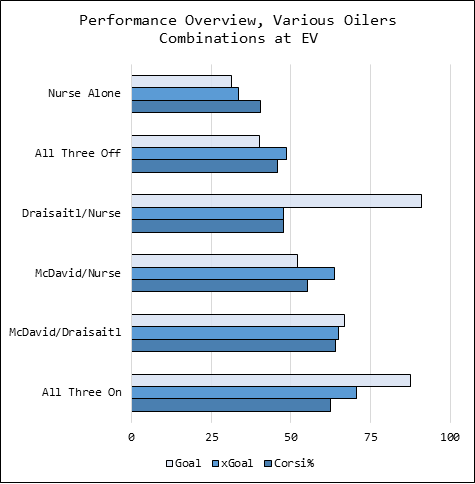 You would expect any defender – any skater, for that matter – to see sizably better performance numbers when playing with the best forward group available. Tippett has been reticent to play Draisaitl and McDavid on the same line, but when they have been assembled and playing in front of Edmonton’s top defensive pairing, the results have been outstanding.

In most cases, Nurse is playing with either the Draisaitl line or the McDavid line, and the underlying numbers there tend to be at break-even or better.

What is curious about Nurse are the minutes that we have seen with him on the ice behind the Oilers bottom-six forwards. There, the Oilers are carrying 31 per cent of the goals, 33 per cent of expected goals, and 40 per cent of the shot share. Those are alarmingly poor numbers.

Compare that to the minutes with the bottom-six forward group on, but playing with a non-Nurse pairing (he’s generally played with Tyson Barrie and Ethan Bear this season): 40 per cent of the goals, 49 per cent of the expected goals, and 46 per cent of the shot share.

Said another way: The bottom third of Edmonton’s roster may be rather disappointing this season, but that alone wouldn’t explain Nurse’s struggles away from the Oilers stars.

What does this mean for Nurse and the Oilers organization? The short answer is they have a rather difficult contract negotiation on the horizon, and understanding what Nurse is contributing is going to be critically important over the next year.

Nurse is a quality player and is being burdened with some serious minutes right now, but star defenders tend to be able to drive play irrespective of who they are playing with.

Nurse looks like two different players on any given night – one a high-end talent and beneficiary of playing with two of the biggest stars in the sport, another a mistake-prone defender victimized by poor quality of teammates.

Nurse is setting himself up to be a part of the franchise for the long term with the season he’s having, but it will be interesting to see if Edmonton is interested in making that happen.