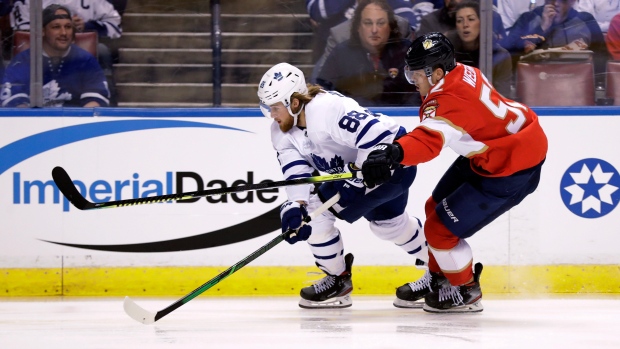 The National Hockey League, particularly in relation to the other major North American sports leagues, requires a lengthy regular season.

A low-scoring league susceptible to high single-game volatility that features a points system that recognizes overtime losses means we need a lot of games to separate the wheat from the chaff.

But if you have looked at the standings recently, this season is a bit different. Absent the muddied middle of the Pacific Division, the league has shown itself to be quite top heavy at the halfway mark. Playoff probability models show 14 teams with 85 per cent or better odds of qualifying for the playoffs – an extraordinarily high number of qualifying teams considering the number of games remaining.

You can infer from that fact alone there’s significant divergence in the talent of teams this year, or a reduced level of parity. You can also see that story reinforced in the data. If we look at every team’s per-game goal differential, we see a marked volatility increase. Lower standard deviations here would indicate teams are closely clustered in talent, whereas a bigger number indicates broad separation between the haves and have-nots: 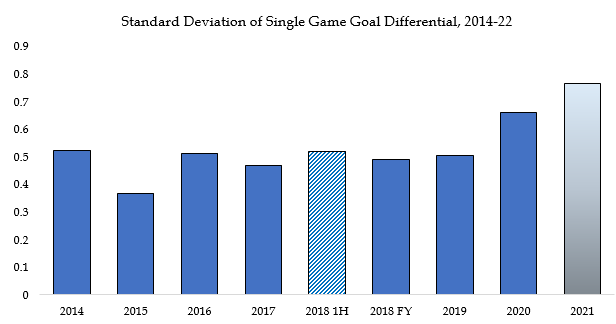 I would be wary of expecting standings compression over the second half of the season merely because teams have 35 or 40 games remaining. If you look at the last 82-game season (2018-19) and split it in half, you notice little change.
This year is unique, and the contenders have separated from the pretenders early. If you think talent divergence is something that develops over multiple years, the fact that 2020-21 was a similarly top-heavy season lends itself to that argument.

This trend made me curious about how we can evaluate the prospective playoff teams. After all, beating up on bottom feeders is little more than getting through the NHL schedule. With the most generosity possible, 11 teams have effectively been eliminated from postseason contention at the halfway point.

Here’s how it looks: 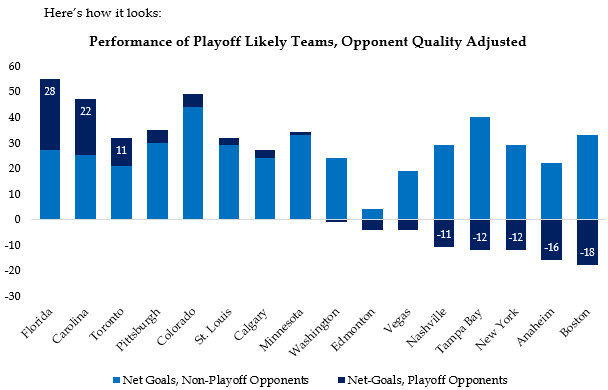 What’s interesting about this graph is it’s speaking loudly about the Atlantic Division. Florida and Toronto lead the pack by way of goal differential against playoff-calibre clubs, while two division rivals in Tampa Bay and Boston are in trail. Or said another way: The Lightning and Bruins have pushed into playoff positions by beating up on weaker teams, offsetting a lot of losses against better competition.

Let’s just look at these three teams for a second, season-to-date:

A quick look at the standings shows the Panthers are the cream of the crop in the Atlantic Division, with teams like the Maple Leafs (57 points) and Bruins (53 points) chasing from behind. And while that’s true, I think this is a notable and marked shift in performance.

Florida has punished every team in its path, but Toronto has been game for quality opponents as well. In Toronto’s 21-game sample, they saw an average margin of victory of +0.52 goals, with a third of those games coming as multi-goal victories.

Compare that to Boston, who are just four points in trail in the standings: the Bruins have an average margin of victory of -0.9 goals per game against strong teams and have four multi-goal victories on a base of 20 games played.

I normally prefer to look at a team’s whole body of work, because more data only strengthens our confidence of how well a player or team is performing. But this year is an interesting outlier, if only because there has already been so much separation in the standings.

If the contenders have already separated themselves from the pretenders, then the next few months may be about Stanley Cup-calibre teams separating themselves from run-of-the-mill playoff teams.