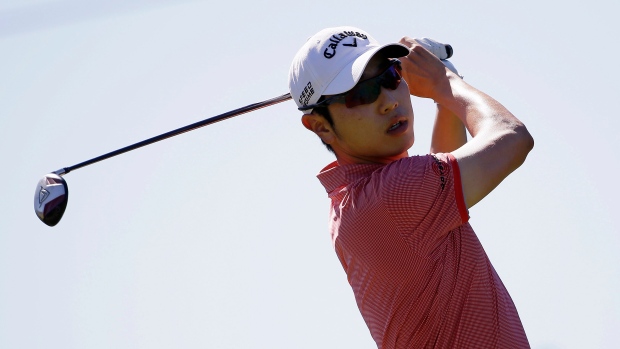 BOISE, Idaho — Brad Drewitt shot an 8-under 63 on Friday for a share of the lead with Sangmoon Bae and Alex Prugh in the Albertsons Boise Open, the third of four Web.com Tour Finals events.

Prugh earned a PGA Tour card with a top-25 finish on the Web.com Tour's regular-season money list. He made $23,143 in the first two events in Ohio to jump from 18th to 12th.

"It means a lot to be in the northwest," said Prugh, from Spokane, Washington. "It was only a 41-minute flight for me, and I have a lot of friends and family that are around. It's nice seeing a bunch of friendly faces around and Boise puts on a great golf tournament here."

Bae and Drewitt are fighting to earn PGA Tour cards by finishing in the top 25 on the series money list. Bae made $38,156 in the first two events, with Seamus Power taking the final card last year at $40,625.

Drewitt, from Australia, earned only $2,925 in the first two tournaments.

"I've got some goals set mentally for myself that I've kind of struggled with a bit this year," Drewitt said. "I just want to play the best golf I can."

He played the first eight holes in 6 under, making an eagle on the par-5 16th.

"It definitely gives you a lot of confidence," Drewitt said. "To see some putts go in as well is great. It got really tough there at the end, so it did help because I had a bit of a buffer. To get low early is a big confidence builder."

First-round leader David Skinns followed his opening 64 with a 72.

The Web.com Tour Championship is next week at Atlantic Beach Country Club in Florida.