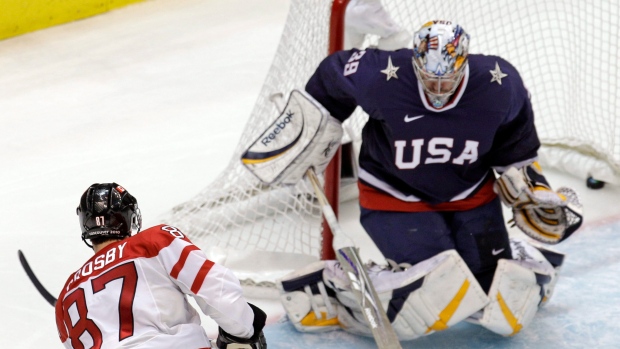 By every imaginable metric, the 2010 Vancouver Winter Olympics was a roaring success for the host country.

Heading into the final day of the competition, Canada was atop the leaderboard with 13 gold medals. Its 25 total medals were good enough for third-most, behind only the United States and Germany, and represented Canada’s highest medal total ever. Contrast those 25 with the 13 total medals in 1988 – the last time Canada hosted the Winter Olympics in Calgary – and the fact that none of those in Calgary was a gold.

Still, there was one more medal event to go that Sunday and Canada had a shot at a 26th medal and a 14th gold. It would be easy to look at it on its face and say that the heights had already been hit and anything else would simply be gravy, but the remaining event wasn’t just any ordinary one. For many, it was the Olympics’ signature event and the gold medal that Canadians wanted more than any.

A gold medal in men’s hockey wasn’t icing on the cake – it was the entirety of it. Claiming supremacy in hockey – the sport created, innovated and beloved in Canada – would let the host country finish their Olympic Games atop the throne the nation believed was rightly theirs.

But Canada took nothing for granted when it came to that tournament.

Eight years earlier in Salt Lake City, there was Mario Lemieux letting a pass go through his legs to Paul Kariya. There was the brilliance of Martin Brodeur. There was Joooooooooe Sakic, as Bob Cole memorably called the gold-medal game. When Canada defeated the U.S. 5-2 on Feb. 24, a nation erupted in catharsis. Yes, Canada had won best-on-best tournaments in the Summit Series and in Canada Cups, but this was the country’s first gold medal at the Olympic Games in hockey since 1952 in Oslo.

The hangover from that momentous day in Utah was felt four years later in Torino. Canada was knocked down a peg in Italy. Featuring much of the same team that won gold in Salt Lake City, Canada stumbled in the round-robin stage, shut out by both Finland and Switzerland, 2-0 each time. That familiar scoreline reared its head in the knockout round as Canada fell 2-0 to Russia and went home in seventh place. The fall from grace was an ugly one.

Vancouver, then, was the opportunity to prove that Torino was a blip on the radar.

Gone were Wayne Gretzky and Pat Quinn, the general manager and coach of the previous two Team Canada entries. In their stead came Steve Yzerman, a member of the 2002 team, and Mike Babcock, his former coach with the Detroit Red Wings.

Where the 2006 team was built with experience, Yzerman and Babcock saw that youth was served in Vancouver with only six returning players from Torino.

“I don’t think we were really at all thinking about what happened in the past,” defenceman Drew Doughty said, who at 21 was making his Olympic debut. “We obviously knew that they didn’t win the gold so we knew everyone was expecting us to win the gold. But we expected that out of ourselves…there was a lot of pressure on us but it was a lot of fun.”

Canada lived up to expectations early, crushing Norway 8-0 in their opener on a Jarome Iginla hat trick.

Their second game would prove to be more difficult. The pesky Swiss made life hard for Canada, as they tend to do in international tournaments. After opening up a 2-0 lead on goals from Dany Heatley and Patrick Marleau, Canada would find itself deadlocked at 2-2 by the end of the second period. With the third period and overtime solving nothing, Sidney Crosby was the lone scorer in the shootout as Canada eked out the 3-2 victory.

If the performance against Switzerland made Canadians a little antsy, the final round-robin game against the United States would evoke a full-blown panic. The silver medalists on home ice eight years earlier against Canada, the U.S. led from the game’s opening minute thanks to New Jersey Devils defenceman Brian Rafalski, who would add a second in the second period. Canada never led and fell 5-3 with Ryan Kesler of the hometown Vancouver Canucks scoring an emphatic empty-net goal as the exclamation point.

Canada had seen this before, though. In 2002, Canada was humbled by Sweden in their opening game, 5-2, before just barely edging by Germany 3-2 and finishing the round robin with a 3-3 tie with the Czech Republic. Memorably, it was Wayne Gretzky’s post-match tirade to reporters after the Czech Republic game that breathed life back into that Canada team.

"The whole world wants us to lose except Canada and the Canadian players,'' the normally reserved Gretzky said in 2002. “It's sickening to my stomach to turn the TV on. It makes me ill to hear what's being said about Canadian hockey. I don't think we dislike those countries as much as they hate us. They want us to fail. They don't like us. We have to get the same feeling. Americans love our poor start. It's American propaganda. Nobody wants us to win but our players and our loyal fans.”

As jarring as it was to see this kind of emotion coming from Wayne Gretzky (?!?), it was the tonic for what ailed Canada. The team didn’t look back and didn’t drop another game en route to the gold.

This time, though, there would be no bold pronouncements or a message of us versus the world after the round robin. Canada stuck to its mission and kept its head down.

The Germans would be the first to feel the brunt of Canada’s renewed vigor in the qualification playoff round. Led by Iginla’s fourth and fifth goals of the tournament, Canada smashed the Germans 8-2 to move on to the quarterfinals and a date with the Russians.

Alexander Ovechkin and Russia headed into the quarterfinal matchup having scored 13 goals in its three round-robin games and earning a bye into the quarters as the winners of Group B. Another tightly played classic between the two long-time rivals appeared to be in the cards in Vancouver, but Canada had no interest in a close contest.

“They came like gorillas coming out of a cage,” Russian goaltender Ilya Bryzgalov summed up the experience on his end.

Canada appeared primed for another rout in the semi-finals as goals from Marleau, Morrow and Getzlaf opened up a comfortable 3-0 lead midway through the second period against a plucky Slovakian side. But a laugher was not to come as the Slovaks scored twice in the game’s final 10 minutes, forcing Canada to hold on by the skin of their teeth for a 3-2 win.

Still, things were going according to plan. Canada had returned to the gold-medal game and was on course to achieve what they and the whole country had planned from the beginning of these Olympics. The only thing that would stand in Canada’s way from a second gold medal in three Olympics would be their now archrival Americans, who already held a win over Canada and still had revenge for Salt Lake City on their minds.

As the puck dropped at GM Place on the afternoon of Feb. 25, a boisterous crowd was as loud as it was anxious. Nerves were calmed just over seven minutes into the first when Mike Richards forced a turnover near the American net from Rafalski that allowed a quick shot on goal. While Ryan Miller made the initial save on Richards, he couldn’t stop Jonathan Toews on the rebound for a 1-0 Canada lead.

Canada increased its lead to 2-0 at almost exactly the same time into the second. Getzlaf started a rush from his own zone and attempted to find Marleau headed to the American net. The pass missed Marleau, but Corey Perry was alone on the doorstep to beat Miller glove side.

But Kesler – again playing in his home arena – wouldn’t let the Canadian fans get too comfortable. With just over seven minutes remaining in the second and the crowd derisively chanting Miller’s name, Kesler took a drop pass from Patrick Kane and handcuffed NHL teammate Roberto Luongo to pull the U.S. within one.

The third period would see no scoring for its first 19 minutes and 25 seconds. Clinging to a 2-1 lead, Canada was on course for gold, but there was a creeping dread that filled the air in Vancouver. With every missed chance for Canada in the third, the sense that somehow this would all come back to bite them grew. Then, as time was running out for the Americans, a breakthrough.

With Miller pulled and both teams scrambling in the Canadian zone, Joe Pavelski grabbed a loose puck behind the icing line and shoveled a pass to Kane near the faceoff circle. The Chicago Blackhawks forward’s shot was headed wide of the net, but was deflected by the skate of Jamie Langenbrunner and right to New Jersey Devils teammate Zach Parise who slipped the puck past Luongo to tie the game with 24.4 seconds left on the clock and force overtime. Momentum was headed the way of the team south of the 49th parallel.

Doughty says that there never any thought of the game slipping away from Canada.

“Obviously, your first thought is, ‘Oh, no..crap!’” Doughty said. “But at the same time you force yourself not to think like that. That’s going to be your first thought and right away you kind of turn it around and believe that we are going to get that next goal and win.”

There was reason for the belief.

What followed is now known as “The ‘Iggy!’ Heard Round the World.”

With 12:30 remaining in the first overtime period, Sidney Crosby – quiet for much of the tournament – stormed into the U.S. zone and attempted to split the defence of Ryan Suter and Rafalski. As Crosby was muscled off the puck, it rolled harmlessly to Miller, who shoveled it off to the sideboards. Crosby found the puck again and regained possession after it got lost in the skates of a linesman. Crosby left the puck for Iginla, who was fighting off Suter, and headed towards the net.

Screaming “Iggy!” Crosby could be heard throughout the arena and on the mics at ice-level, as he called for the puck from Iginla. Iginla obliged and from the tightest of angles inside the faceoff circle, Crosby beat Miller between his legs to win the gold medal.

For just a split-second, only Crosby, it seemed, knew the puck went in. But then, there was eruption as GM Place became unglued.

Should it have, though? Ostensibly, it was a shot that Miller should have had, considering the minute amount of space that Crosby had to work with, but Doughty disagrees. It wasn’t a bad goal at all. Crosby is just that good.

“It was a smart goal,” Doughty insisted. “A lot of people wouldn’t think it was a good goal, but it was a smart goal.  He got the puck and it was on and off his stick in two seconds and five-hole. That’s a tough shot for the goalie to stop.”

It was a bit of brilliance, then, from the world’s best hockey player to ensure Canada’s best ever Olympics closed in the best possible way.