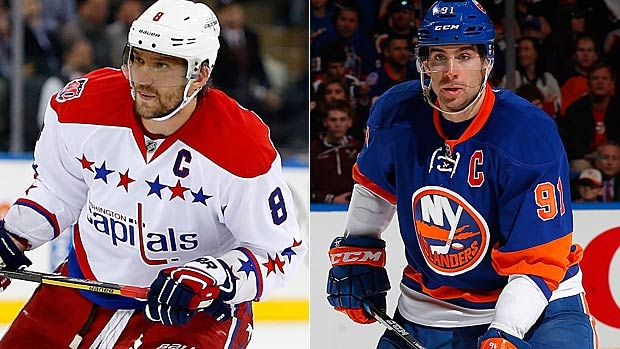 For the sixth consecutive year, Pittsburgh Penguins star captain Sidney Crosby has been ranked at the National Hockey League's No. 1 player, as announced Wednesday on TSN Hockey's Top 50 Players special.

Examine the statistics and accomplishments of all 50 players listed below.

The Hart Trophy winner fashioned the third highest save percentage (.933) ever recorded.

Ovi is the fifth player to make the First or Second All-Star Team at least nine of his first 10 seasons.

He's finished first or second in goals five times during his NHL career.

Getzlaf and Sidney Crosby are the only two players in the Hart Trophy voting's Top 7 over the last three seasons.

The Norris Trophy winner directed 396 shots at the net last season, 67 more than the next closest defenceman.

Geno has averaged at least a points a game in eight of nine NHL seasons.

The Conn Smythe Trophy winner accumulated a career-high 21 points in the 2015 playoffs.

He is the NHL's only 35 goal/35 assist player each of the past two seasons.

Weber leads all active defencemen with seven seasons of at least 15 goals scored.

He has led the Los Angeles Kings in point scoring in eight straight years – the NHL's longest current team streak.

The one-time Rocket Richard winner hit the 30-goal mark for the fifth time in his career.

He is the only defenceman to make the First All-Star Team in two of the past three seasons.

Only Sidney Crosby (124) has had more assists than Backstrom (121) over the past two seasons.

The 2014-15 runner-up has won the Lady Byng Trophy four times during his NHL career.

The first-time First All-Star's 33 power play points tied him for third in the NHL last season.

The King has won at least 30 games each season - except for the lockout-shortened 2012-13 campaign.

He has won the Selke Trophy three of the past four years and was runner-up the other year.

The Flames' captain is second to only Erik Karlsson in points per game by a defenceman (.76) over the past two seasons.

Rinne placed second in Vezina Trophy voting for the second time in his career.

He scored a career-high 71 points in his fourth NHL season.

The Canadiens' new captain leads the NHL with 21 game-winning goals over the past two seasons.

His 78 goals over the past two seasons are second only to Alex Ovechkin's 104.

Minnesota's top blueliner has led the NHL in average ice time over the past three seasons.

His career 2.27 goals-against average is fourth-best among active goalies.

Kessel is the only Top 50 player to switch NHL teams during the off-season.

The CHL Player of the Year averaged 2.5 points per playoff game for the Erie Otters.

His 55 points were 10 more than superstar teammate Shea Weber's 45.

He's quietly re-emerged as a premier scorer with 42 goals, the third most in the NHL.

Making the Top 50 with only 38 points in 53 games speaks to Hall's enormous talent.

'OEL' led all NHL defencemen in goals last season with 23.

He has scored at least 20 goals each of his first five full NHL seasons.

Washington's No. 1 netminder led the league in games played last season and has a career .921 save percentage.

He earned at least 55 assists for the eighth time in his 14-year career.