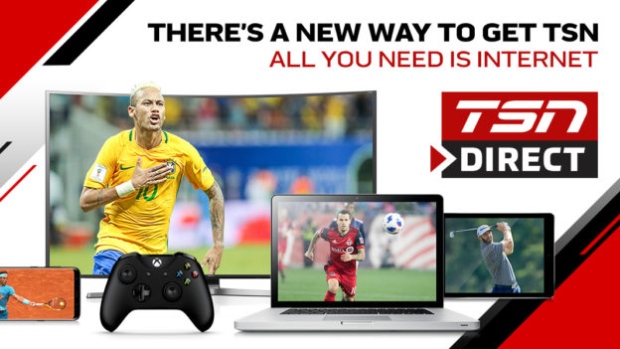 Just in time for 2018 FIFA WORLD CUP RUSSIA™, it was announced today in advance of the #CTVUpfront that Canadians have a new way to get TSN and RDS with the introduction of TSN Direct and RDS Direct. Canadian sports fans now have a digital subscription option to access TSN, including the network’s five feeds featuring 60+ iconic championship events, on-demand content, and exclusive bonus streams of major sporting events. French-language content from RDS, RDS2, and RDS INFO, is also available through its own direct, monthly subscription.

TSN Direct and RDS Direct will be available tomorrow (Friday, June 8), providing a new subscription option for Canadians in advance of the 2018 FIFA WORLD CUP RUSSIA™. All 64 matches air live and on demand beginning Thursday, June 14 on TSN and RDS platforms.

Current TSN and RDS subscribers with participating television providers can continue to stream Canada’s most-watched sports networks, and have access to the on-demand content and bonus streams through the TSN app or TSN.ca/Live, and the RDS app or RDS.ca.

TSN Direct and RDS Direct are available for $24.99 a month with no contract, allowing digital subscribers to access TSN and RDS’ programming through their computer, tablet, mobile device, Apple TV, Samsung SmartTV, and Xbox One, with more platforms to be announced soon.

Current TSN and RDS subscribers can continue to access TSN’s five feeds and RDS content through the apps or TSN.ca and RDS.ca by providing their service provider account details when logging in. TSN Direct and RDS Direct subscribers will access the streaming content through a separate authentication process.

“Providing choice and variety has been a driving force behind our programming strategy, and we know Canadian sports fans want options in terms of how they watch and consume our content,” said Stewart Johnston, President, Media Sales, Marketing, and TSN. “We’re excited to introduce TSN Direct to sports fans nationwide, allowing them access to their favourite sports and our extensive championship events through a monthly digital subscription.”

“With RDS Direct, we are offering consumers a new way to access the largest portfolio of French-language sports properties in the world,” said Gerry Frappier, President, French Television and RDS. “It’s more important than ever to provide choice and reach fans wherever they are, and we’re pleased to be the first to offer a subscription-based service in French for sports fans in Québec.”

The TSN GO and RDS GO apps have been rebranded the TSN and RDS apps, and new users can download them by searching “TSN” or “RDS” in the iTunes App Store (iOS) or Google Play Store (Android). In addition to continuing to stream live and on-demand content, both apps provide an extensive scoreboard, news updates and in-depth articles, video highlights, and the full broadcast schedules, as well as TSN Radio live streams on the TSN app. The apps also feature a dedicated hub for 2018 FIFA WORLD CUP RUSSIA™, with match scores and stats, group breakdowns, a full broadcast schedule, and player performance and leaders.