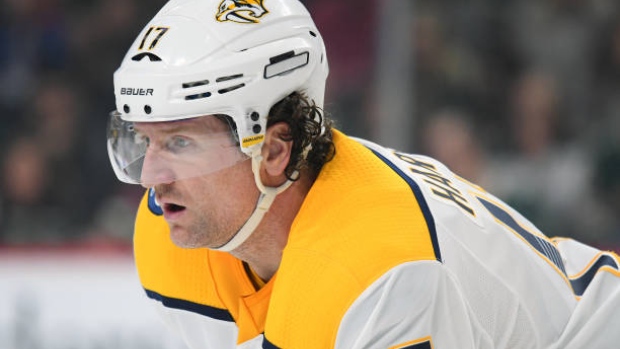 The 36-year-old was informed after the season by the Predators that he won't be re-signed, and while he plans to look for a contract this summer, Hartnell feels at peace if his 17-year NHL career is at an end.

"There’s no secret I’m at the twilight of my career," Hartnell told the Tennessean. "If my career was over this past season, I’ve got so much to look forward to. I’ve got no complaints [about] the way my career has [gone]."

Hartnell scored 13 goals and posted 24 points in 62 games with the Predators last season. He appeared in four of the team’s 13 playoff games, failing to record a point. He said the team's decision to let him walk this summer did not come as a surprise.

"I kind of figured as much," Hartnell said. "They have a lot of guys on one-way [contracts] that need to come up and [they] need to give them a chance. They’re going with their young guys obviously as we saw toward the end of the year, so it was no surprise in that respect.”

He told the Tennessean he's training in anticipation of free agency and will be looking to find a bottom-six role.

"If there’s a call in July and it’s the right opportunity and the right fit for me and my family, I think we’ll take that if I am comfortable with the role I want to play," Hartnell said. "But if it doesn’t come to that and it doesn’t turn into anything, I’m ready to move on, too. I have lots to look [forward to] here in my after-hockey-playing years.”

Hartnell, the sixth-overall pick in 2000, made his debut with the Predators during the 2000-01 season. He has 327 goals and 707 points in 1,249 games with the Predators, Philadelphia Flyers and Columbus Blue Jackets.