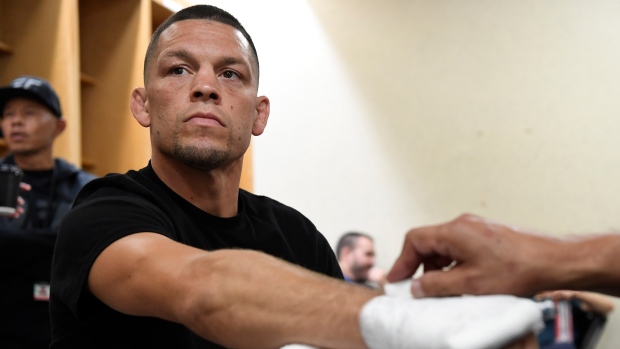 After days of uncertainty surrounding the status of Nate Diaz heading into UFC 244, the 34-year-old has been cleared by both USADA and the UFC and was not provisionally suspended.

On Thursday, Diaz posted on social media that there was an irregular finding that was flagged by USADA and that he would not be competing at the event until it was cleared up.

The situation was cleared up late Friday night when the UFC released a statement explaining that they had reached a verbal agreement with USADA that took place as early as August 31 on significant changes to the UFC Anti-Doping Policy.

One of those changes was that certain positive findings below a minimum threshold would be considered an “innocent contamination”.

Diaz’s case fell under this category after he supplied the tainted supplement, which according to ESPN’s Brett Okamoto was a vegan, organic, plant-based multivitamin.

As a result, the main event of UFC 244 is unaffected and is expected to proceed as planned.

The full statement provided by the UFC reads as follows:

The main event at UFC 244 on Saturday November 2, 2019 at Madison Square Garden in New York, New York between Jorge Masvidal and Nate Diaz will proceed as scheduled.

UFC is an industry-leader in anti-doping and we continuously strive and advocate for an effective and fair program for our sport and athletes.  From January of 2019, UFC and USADA, along with independent experts and consultants, have been reviewing the UFC Anti-Doping Policy to ensure it remains a reliable and effective tool to combat doping in our sport and to protect UFC athletes that compete in the Octagon.

As early as August 31, 2019, certain significant changes to the UFC Anti-Doping Policy have been agreed on in principle between UFC and USADA and, as such, have been put into practice.  One of these changes is the adoption of scientifically-based decision concentration levels, also known as minimum thresholds, for certain prohibited substances where evidence has shown that positive tests of these substances below the threshold are consistent with innocent contamination. A positive sample of an applicable substance below the decision concentration level is treated as an atypical finding. An atypical finding will result in no violation in the absence of other facts or circumstances that confirm the athlete intended to gain an unauthorized performance enhancing or therapeutic benefit through the use of the substance.

Since August 31, 2019, several UFC athletes have had their provisional suspensions lifted based on the implementation of decision concentration levels, including Neil Magny. Mr. Magny’s provisional suspension was due to a positive sample containing a prohibited SARM (Selective Androgen Receptor Modulator), known as LGD-4033 or Ligandrol, in an amount below the decision concentration level for this substance. Mr. Magny’s atypical finding was reviewed by USADA and it was concluded that no other facts or circumstances were present that would have resulted in an anti-doping policy violation by, or sanction for, Mr. Magny.

On October 24, 2019, Nate Diaz released a public statement regarding a recent out-of-competition test conducted by USADA. UFC has been notified by USADA that the out-of-competition test concluded that LGD-4033 was present in Mr. Diaz’s sample at an amount below the decision concentration level for this substance. USADA is reviewing the out-of-competition test as an atypical finding. Further laboratory testing conducted by the Sports Medicine Research and Testing Laboratory (SMRTL), a WADA-accredited lab in Salt Lake City, Utah, has confirmed that two bottles of the same organic, vegan, plant-based daily multivitamin that Mr. Diaz was using were each contaminated with LGD-4033, which the evidence supports resulted in Mr. Diaz’s positive sample.

Mr. Diaz has not committed an anti-doping policy violation, has not been provisionally suspended and is not subject to any sanctions. Additionally, UFC has been informed by independent experts who have determined that there is unequivocally no appreciable performance enhancing or therapeutic benefit from the significantly limited amount of LGD-4033 that may be present in his system, which is roughly 10,000 times lower than one LGD-4033 therapeutic dose.

Upon completion of the revised UFC Anti-Doping Policy, UFC and USADA will make the policy publicly available.

Demian Maia and Ben Askren, two of the greatest grapplers in the history of mixed martial arts engaged in a back-and-forth chess match in the main event of UFC Fight Night in Kallang, Singapore.

After two close rounds that consisted of striking and grappling exchanges, Maia was able to scramble to Askren’s back in the third round and sink in a rear naked choke that forced Askren to submit moments before he was rendered unconscious.

Askren, who was acquired by the UFC in a trade with ONE Championship for former flyweight champion Demetrious Johnson, fell to 1-2 during his UFC tenure.

In his post-fight interview, the 41-year-old Maia stated that he planned on fighting twice more before retiring and named Diego Sanchez as a potential opponent.

Following the event, Askren tweeted that he had made a bad decision and failed.

The lone Canadian on the Singapore card Randa Markos continued her pattern of alternating between wins and losses and improved to 6-6-1 after a split decision win over Ashley Yoder.

The Windsor native has yet to win or lose back-to-back fights in the UFC and showed major improvements in her striking game that paid dividends in this particular bout.

“I’m happy about this victory. I’m going to go back to the drawing board and get stronger. I could have done better today,” Markos said in an e-mail distributed by the UFC following her bout.

Gane put on a showcase against Don’Tale Mayes, an intriguing prospect in his own right, with nearly three full rounds of damaging strikes and an evolving ground game that led him to a submission win with just 14 seconds remaining in the fight.

In the dying seconds, Gane landed the first heel hook submission finish of 2019 according to UFC statistician Michael Carroll.

With the skills exhibited by Gane, who trains in France with former heavyweight title challenger Francis Ngannou, it would be a shock if he is not a top-10 ranked heavyweight by the end of 2020.