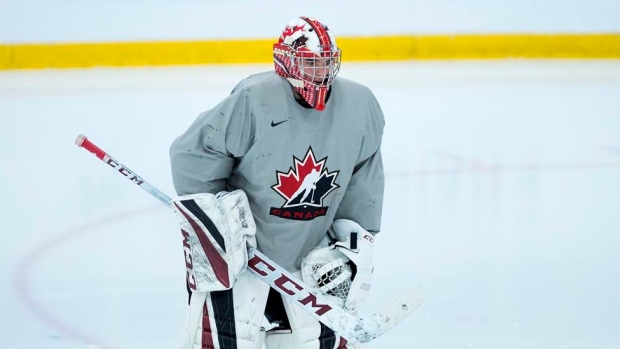 OAKVILLE, Ont. — Nico Daws had never played internationally, never participated in a single Hockey Canada practice and was passed over by all 31 teams at last June's NHL draft.

So how does a goalie with that resume find himself on the cusp of making his country's roster for the world junior hockey championship?

Daws took a moment before answering.

His eye-popping numbers over the last three months are a good place to start.

Daws leads the Ontario Hockey League with a 2.06 goals-against average and a .939 save percentage for the Guelph Storm, who sit second in the overall standings, after playing just 34 combined games as a backup over his first two junior seasons.

"I had a good summer," he said. "I knew I had to have a breakout year and really prove that I belong."

Standing in front of a Hockey Canada backdrop and sporting a crisp black hat adorned with a red Maple Leaf, Daws has certainly shown he does.

"It's definitely an honour, something I've never done before," said the native of Burlington, Ont. "When I got the call I was really excited. Hopefully I can make the team and continue."

Daws is one of four goalies at Canada's selection camp this week hoping to earn a spot on the 23-man roster for the under-20 tournament that runs Dec. 26 to Jan. 5 in the Czech Republic.

Olivier Rodrigue and Hunter Jones have a history with Hockey Canada at lower age groups and were both part of the setup this summer, but Daws and Joel Hofer are green on the international stage as the country prepares to take three netminders overseas.

"What we like about this group is they've trended really, really well from September to now," said Brad McEwen, the program's head scout. "They've all got extremely good numbers, they've got wins, their teams are all doing well. They've put themselves in a good spot."

"It's an open race," said Mark Hunter, general managers of the OHL's London Knights and a member of the management group. "It's a good challenge for each goalie in that dressing room."

Daws, however, wasn't sure back in the fall he was ever going to get his chance in Guelph, let alone with Canada.

"I came into this season not knowing where I was going to play," he said. "It ended up working out. I got to stay in Guelph. I really proved myself.

"Really happy other people are starting to take notice."

The world juniors weren't on his radar until he was invited to play for the OHL team in November's Canada-Russia exhibition series, where Daws, who had a sub-.900 save percentage in junior before this season, stopped all 13 shots he faced.

"I really didn't have any expectations like that," he said of international play. "I just wanted to be a proven starter."

Set to turn 19 on Dec. 22 when Canada will be making its final preparations in Europe before facing the United States on Boxing Day, the six-foot-four, 202-pound Daws has impressed his prospective Canadian teammates.

"We've played him three times and he's shut us down," said forward Cole Perfetti, who plays for the OHL's Saginaw Spirit. "It's pretty cool. He wasn't part of the program for under-17s, under-18s, but he deserves to be here."

Daws said he hasn't felt any pressure this week as part of a 31-man roster that includes 11 first-round picks, and a number of others expected to go high at the 2020 draft.

"(Nobody's) really expecting anything from you," he said. "You just try and do your thing."

Daws trains with Jones in the summer and said it's been nice having at least one familiar face around the hotel and the rink.

"He helps me be a lot more comfortable," Daws said. "There's a lot of guys here that I don't know."

Jones wants Canada's No. 1 job for himself, of course, but is proud of his workout partner's rise.

"He's just been given the opportunity," said the starter for the first-place Peterborough Petes. "He grabbed the ball and ran with it."

For Daws, it's all gravy at this point after watching 217 names come off the draft board — including 22 goalies — last spring.

"Not getting drafted, never playing for Team Canada, not going to any NHL camps ... it's nice to play good and prove people wrong," he said. "I'm trying to stay in the moment. I've got a lot of work here.

"I don't really want to take my foot off the pedal."