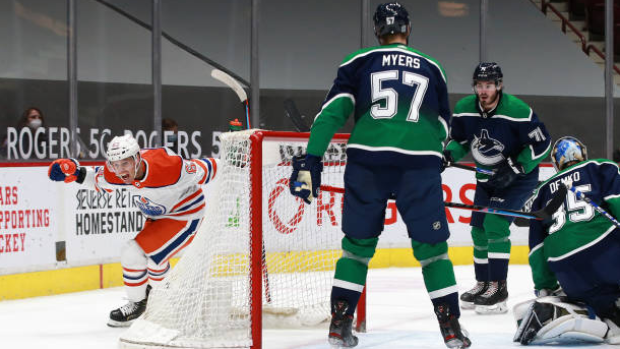 Vancouver Canucks captain Bo Horvat said Tuesday his team showed they need to "mature as a group" after blowing a 3-0 first-period lead in their 4-3 loss to the Edmonton Oilers.

"You give players like that time and space and the ability to take over a hockey game and they're going to do it," Horvat said.

"Again, it's just frustrating, but … it just shows we have to mature as a group, learn from it and move on and do things better the next game. Obviously, this has happened a couple of times and we’ve got to put our foot down right now and make it stop and finish it off."

The loss marked the second straight game the Canucks exited the first period with a two-goal lead, having lost 4-3 in overtime to the Winnipeg Jets on Sunday.

"I'm getting sick and tired of having leads and giving them back and playing well in periods in the game and then not playing a full 60 minutes," continued Horvat, who scored the opening goal. "Again, we did it tonight and it came back to bite us."

The struggling Canucks have won just two of their past 12 games and sit five points back of the Montreal Canadiens for the fourth and final playoff in the North Division with five more games played.

Head coach Travis Green was honest in his assessment of the team's latest loss.

"I didn’t think we were as good tonight as we have been," he added. "Quite frankly, we had some individuals that didn’t play good enough tonight."

The Canucks will face the Oilers again on Thursday before having the weekend off.