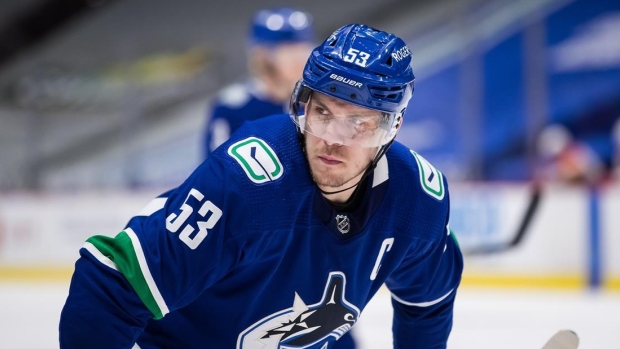 VANCOUVER — After a season punctuated by a COVID-19 outbreak and a grinding schedule, the beleaguered Vancouver Canucks are looking forward.

"A lot’s been thrown our way this year and it seems like whatever else can get thrown at us next year and in the coming years is going to be minuscule compared to what happened to us this year," he said Thursday. "I hope that’s the case. And we’re going to know how to handle it a lot better."

The Canucks weathered illness, injuries and extended losing skids before capping the campaign with a 6-2 loss to the Calgary Flames on Wednesday.

Vancouver finished the year last in the all-Canadian North Division, one point back of the Ottawa Senators, and missed the playoffs for the fifth time in six seasons.

Another abrupt end to the year was difficult, Horvat said.

"For me, I want to win. I’m getting tired of being out of the playoffs and not being able to fight for the Stanley Cup," he said. "I want to win here and I think we have the group to do it. Collectively as a group, we have to take that next step next year and fight and make the playoffs."

The Canucks' 2021 campaign got off to a shaky start with just two wins in February. Things appeared to be turning around when a COVID-19 outbreak swept through the locker room at the end of March.

Twenty-one players and four coaching staff tested positive for the virus, with many experiencing symptoms that included extreme fatigue, fever, chills and shortness of breath. Loved ones also fell ill, including wives and children.

Vancouver had several games postponed and didn't play for more than three weeks.

The Canucks' return was pushed back a few more days in mid April after forward J.T. Miller spoke with media and said players didn't feel as if they'd had enough time to recover and get back into game shape.

Antoine Roussel linked the knee injury he suffered on April 20 directly to recovering from COVID, saying he lost five or six pounds and was weaker than he would have been midway through a normal season.

The bottom-six winger was one of several Canucks forwards to go down with injuries late in the season.

"It seemed like our entire bottom six was depleted," Roussel said. "As much as you need your top six to score goals, you need your bottom six for other reasons. It's a recipe, you need everybody to be in, you need your club to be healthy to have success. ... I blame COVID for it, for my injury. I do."

Vancouver was already missing firepower up front when the COVID-19 outbreak occurred.

Star centre Elias Pettersson hyperextended his wrist in a 4-0 win over the Winnipeg Jets. He played again the next night but the injury grew worse. While Pettersson was initially listed as day-to-day, he did not return to the lineup for the final 30 games of the season.

The 22-year-old said Thursday that he's been training again and is still experiencing some issues when he shoots the puck, but expects to be back at 100 per cent next season.

Watching the season unfold has been frustrating, Pettersson said.

"I just want to play," he said. "I just miss playing hockey and being able to help this team win."

Despite the disappointing results, the young sniper liked the way his teammates fought and played hard all year.

"We didn’t have our best season but the compete was always there," Pettersson said. "Of course this whole COVID situation happened to us, guys played their hearts out even though the schedule and everything was tough."

The Canucks had some success in their return from the COVID-19 pause, posting a pair of wins against the division's top team, the Toronto Maple Leafs.

“A couple games we were going off of adrenalin and everything," said goalie Braden Holtby, who had stellar performances in both victories.

"I think myself, our team, the schedule just caught up to us in the end. I think everyone here did an outstanding job of grinding through, competing. I don’t think anyone could say those guys didn't compete and try hard. It’s just that towards the end, it feels like you’re playing with a weighted vest on, just because of circumstance."

Vancouver played its final 19 games in just 32 days, with five sets of back-to-backs. The stretch was "extremely grinding" for the group, said coach Travis Green.

"And I am proud of how they’ve kind of rallied around each other and had some hard games, some tough games, some games where they didn’t play well. But they always seemed to find a way to bounce back and play better," he said after Wednesday's loss. "It’s hard not to be proud of your group."

While this season was a step back for a team that surprised many in last year's playoff bubble, Green still believes good things are coming for the Canucks.

Whether he'll be in Vancouver to see the results, though, remains to be seen.

The coach's contract expires at the end of the season and while Green has repeatedly said he's keen to stay with the team, there has been no word from management or ownership on whether a last-minute extension is in the works.

Sorting out the coaching situation is just one piece of business that Vancouver's front office needs to handle in the coming weeks and months. Management must also make plans for the looming Seattle Kraken expansion draft and shore up a number of contracts.

Veterans like Alex Edler and Brandon Sutter are set to become unrestricted free agents, while young stars like Pettersson and defenceman Quinn Hughes are about to finish their entry-level deals.

Edler, 35, said Thursday that he hasn't had any discussions with the Canucks regarding his future put plans to continue his hockey career next season.

"I still love the game, I still feel like I can play so I definitely want to keep playing," he said.

Edler has spent his entire 15-season NHL career with the Canucks and said he's seen improvements under Green's tutelage.

"I think he came in and we obviously weren’t great there for a few years and he came in and set a good standard, a higher standard of what players need to do and kind of built more of a winning culture here," said the veteran defenceman.

"And I think we’ve kind of been getting better and better every year, not counting this year.