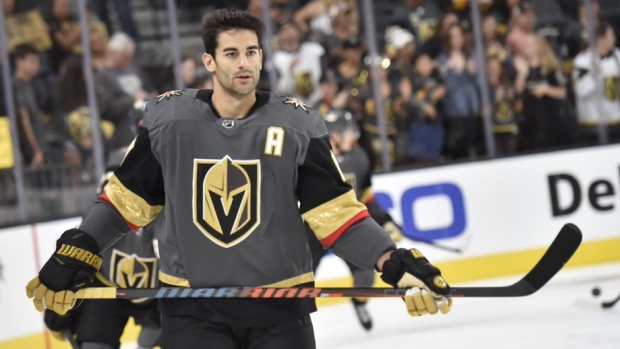 The Vegas Golden Knights announced Friday forward Max Pacioretty is dealing with a minor injury and will not play against the New Jersey Devils.

👉Pacioretty has a minor injury and will not play tonight.

👉Stastny is in will play alongside Tuch and Lindberg

👉We'll find out the rest of lineup tonight 👌

"The team feels it is best for him to miss one game rather than six. (It) it management's decision to hold him out tonight," a team spokesperson said via David Schoen of the Las Vegas Review Journal.

News of the injury is a different tone from earlier on Friday when Knights' head coach Gerrard Gallant said Pacioretty was fine, and said he could serve as a healthy scratch.

“There's nothing wrong with Max," Gallant said via Schoen. "We’ve got to scratch somebody tonight and we’ll decide tonight. … We’ll know before warmups.”

The Golden Knights told me left wing Max Pacioretty does, in fact, have a minor injury and won't play vs. Devils.
From a team spokesperson: "The team feels it is best for him to miss one game rather than six. (It) is management's decision to hold him out tonight." #VegasBorn

Pacioretty served as an extra skater during Friday’s practice and didn’t take his usual spot in power play drills either, being replaced on the top unit by William Karlsson.

The team is adjusting their lineup on Friday to accommodate the return of centre Paul Stastny, who confirmed he will play on a line with Alex Tuch and Oscar Lindberg.

Pacioretty has 18 points (10 goals, eight assists) in 28 games this season, including three points in his last four games.

Golden Knights with some unusual line rushes this am at morning skate.
All 23 players on the ice. Pacioretty was an extra with the 4th line. Lindberg was with Stastny and Tuch. Eakin between Carpenter and Nosek.#VegasBorn pic.twitter.com/VrCnVFEpP8

The 30-year-old was traded to the Golden Knights in September from the Montreal Canadiens for prospect Nick Suzuki, winger Tomas Tatar and Vegas' second-round pick in 2019 NHL Draft.

He signed a four-year, $28 million contract extension with the Golden Knights following the trade, which will take effect next season.