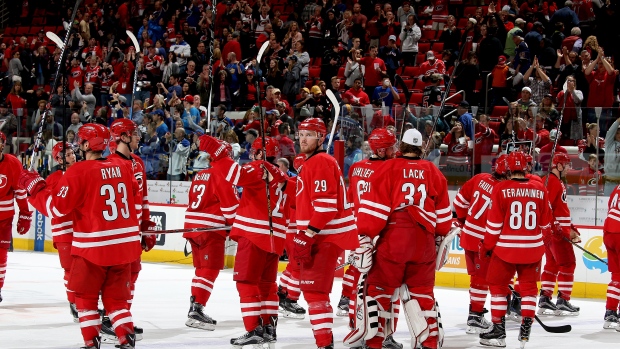 A number of suitors for the Carolina Hurricanes have emerged.

Team president Don Waddell told Chip Alexander of the Raleigh News & Observer that while talks with Texas lawyer Chuck Greenberg have cooled, there are other groups interested in the purchase of the club.

“The Greenberg thing had been ongoing as we all know,” Waddell said. “It has slowed down. We haven’t heard back from Chuck in a while. We believe he is actively trying to find investors. But there are others groups that have now stepped forward and taking hard looks at the franchise. Obviously, Tom Dundon’s name came out today, a Dallas businessperson who has a lot of interest.”

Dundon founded a sub-prime car loan company called Santander Consumer USA and recently financed the Trinity Forest Golf Club in Dallas that will play host to the AT&T Byron Nelson next May.

Greenberg acknowledged on Wednesday that, while he remains interested in the club, he has yet to acquire the sufficient funds for a purchase.

“In late September, we had made a lot of progress getting the equity but we weren't all the way there,” Greenberg, the former CEO of the Texas Rangers, said. “Pete told me he felt the value had gone up and he wanted to test the market by talking to other buyers. Given the amount of time throughout which we'd been having our discussions, I completely understood. After all, it's his team and his prerogative. Since that time, the last eight or nine weeks, he and his representatives have been talking to other buyers. I've been talking to other potential investors.”

Waddell notes that all potential buyers have indicated that they intend to keep the team in Raleigh.

The Hurricanes relocated from Hartford in 1997 and while they reached the Stanley Cup Final in 2002 and won the Stanley Cup in 2006, the team has only made the playoffs five times while in North Carolina. The club last qualified for the postseason in 2009.

Attendance has suffered in recent seasons with the club averaging 11,776 fans a night last season, its lowest mark since 1997. The team is on pace to draw even fewer fans this season. Through 12 home dates this season, the Hurricanes have averaged 11,665.