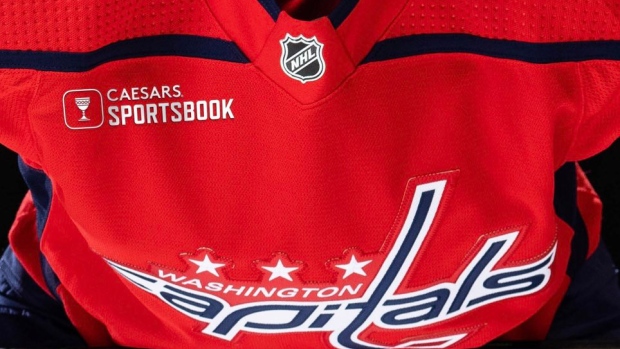 The Washington Capitals announced on Friday that the NHL team and Caesars Entertainment Inc. have agreed on a multi-year partnership that places the Caesars Sportsbook logo on Capitals home and third jerseys worn for home games beginning with the 2022-23 NHL season.

It is the first announced agreement in the NHL's Jersey Advertising Program.

Caesars Sportsbook will have its logo worn on the Capitals home and third jerseys, with a 3 x 3.5 inch patch positioned on the upper right chest area.

Our fans are loyal and loyalty is LOUD!

So let’s raise a goblet to the future and welcome @CaesarsSports to the #ALLCAPS Family!https://t.co/tVaKFS2smg pic.twitter.com/vBHKbcFriY

The league will allow teams to put sponsor patches on jerseys beginning with the 2022-23 season after the board of governors unanimously approved the move this past summer.

League officials, including Commissioner Gary Bettman, had said the next step of going to jersey ads would have to be at a value that’s worthwhile in hockey, a sport that has long prioritized the front of the “sweater.”

The New Jersey Devils, Capitals and Nashville Predators were the first teams to unveil helmet ads last December. Each struck a deal done with the company that sponsors the naming rights for its arena.

The NBA began selling jersey sponsorships in 2017-18, when Nike became the league’s official apparel company. The program has brought in well over $150 million in revenue.